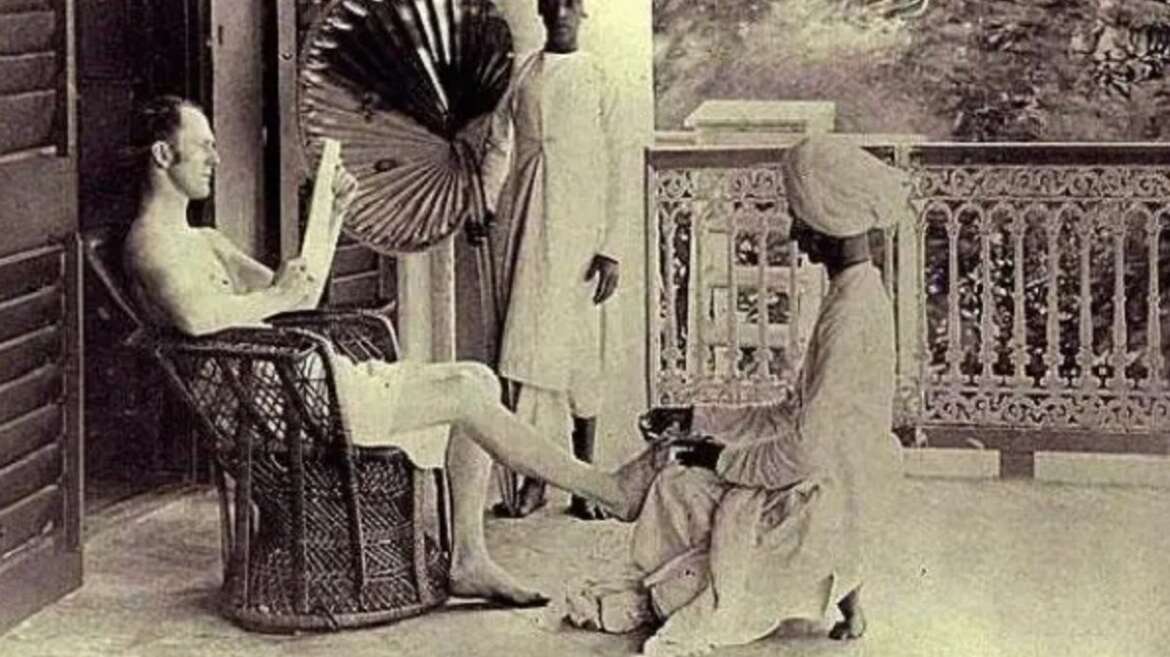 Pic: A British man gets a pedicure from an Indian servant.
It’s a myth that British imperialism benefited one of its richest colony, India, when in reality it drained all its wealth and resources.

According to a YouGov poll in 2016, 43 percent of British citizens thought the existence of the British Empire was a “good thing,” while only 19 percent disagreed. It’s a myth that British imperialism benefited one of its richest colonies, India when on the contrary it drained all its wealth and resources just like colonizers do.

“They don’t talk about the colonial textbooks, it should be taught as part of the history because after all, it is their history. It’s also about acknowledging their past and learning about their ex-colonies. Denial is the worst thing,” said Assistant Professor of History Ruchika Sharma at Gargi College, Delhi University.

The British East India Company made its sneaky entry through the Indian port of Surat in 1608. Originally the company started with a group of merchants trying to seek a monopoly over trade operations in the East Indies. In 1615, Thomas Row one of the members approached the ruling Mughal emperor Jehangir to gain permission to open the first factory in Surat.

Slowly as they expanded their trade operations, the British started forming colonies. Penetrating deep into Indian politics, the imperialists took advantage of the infighting between the ruling royalty in different states, pitting one against the other by taking sides and offering protection.

Imperial rule destroyed India’s local hand loom industry to fund its own industrialization. India became one of the major cotton exporters to the U.K. The raw materials from India were taken to the U.K. and the finished products were sent back to Indian markets and other parts of the world, leaving the Indian handloom industry in shambles and taking jobs away from local weavers.

India, that was one of the major exporters of finished products became an importer of British goods as its world share of exports fell from 27 percent to 2 percent. India was once referred to as “Sone ki Chidiya” or “The Golden Bird” before the British looters drained all its wealth. At the beginning of the 18th century, India’s share of the world economy was 23 percent, as large as all of Europe put together, but by the time the British were kicked out of India in 1947, it had dropped to less than 4 percent, according to the BBC.

2. How the British Empire starved India

The last famine in India, in Bengal between 1943 and 1944, claimed over four million lives. The Bengal famine — also referred to as the man-made famine — between 1943 and 1944 claimed over four million lives and is said to have been engineered as part of an unsympathetic and ruthless economic agenda, according to Rakhi Chakraborty’s book titled, “The Bengal Famine: How the British Engineered the Worst Genocide in Human History for Profit.”

Madhusree Mukerjee, a U.S.-based journalist, points out in her book, “Churchill’s Secret War: The British Empire and the Ravaging of India During World War II,” that U.K. Prime Minister Winston Churchill ignored farmers’ pleas for emergency food aid, leaving millions to starve as their rice paddy fields were turned over to jute production. Mukerjee cites ministry records that reveal ships carrying cereals from Australia bypassed India on their way to the Mediterranean Sea where supplies were already abundant, the Telegraph reported.

According to Crimes of Britain, during the Bihar famine of 1873, the so-called “relief efforts” were deemed “excessive.” The British didn’t intend to end the misery caused by the famine but instead devised a strategy to prolong the starvation. The people suffering the famine, in what the empire called the “distance test” were made to walk over 10 miles to and from the relief works, according to the Crimes of Britain. The food provided at these slave labor camps where the annual death rate in 1877 was 94 percent was less than that provided at the Nazi concentration camp Buchenwald.

3. Stole from the language of the oppressed

Imparting the English language was a colonial instrument designed to help the British empire oppress the Indian masses. The strategic decision by the East India Company was made to create a class of Indians, the “Babus,” who could act as a bridge between the millions of Indians who didn’t speak the language. Secretary to the Board of Control Lord Macaulay, in a nasty 1835 “Minute on Education,” urged the Governor-General to teach English to a minority of Indians, reasoning, “We must do our best to form a class who may be interpreters between us and the millions whom we govern; a class of persons, Indians in blood and color, but English in taste, in opinions, in morals and in intellect.”

In their 200 years of rule, the British couldn’t help but steal words from local Indian languages that are now part of the English vocabulary. Ironically, one of the first words that they took was “loot” equivalent to “plunder.” According to the Oxford English Dictionary, the word was rarely heard outside the plains of north India until the late 18th century, after which it became a commonly used term across the U.K. Some other common words stolen from the subcontinent include bungalow, cheetah, chutney, juggernaut, maharaja, mantra, nirvana, pundit, thug, veranda, pyjama, shampoo and bangle, among others.

In 1843, Governor-General Charles Hardinge said the construction of railways would benefit the empire and help with “the commerce, government and military control of the country.” The railroad was paid for by Indian taxpayers. The British shareholders claimed the investments guaranteed massive returns.

The colonizers were only interested in exploiting India’s natural resources as they transported items such as coal, iron ore, cotton and other natural resources to ports for the British to ship home to use in their factories. Indians were prohibited from riding in first class compartments in the trains that they helped build even if they could afford it as the first compartments were labeled as “Dogs and Indians are not allowed.” Thousands of Indian workers died during the construction of the railroads.

The British Empire adopted the age-old political strategy of divide and conquer throughout their colonization of India. The occupiers used the strategy to turn locals against each other to help them rule the region. Whenever the British felt threatened by Indian nationalism and saw it growing, they divided the Indian people along religious lines.

In 1905, Viceroy of India Lord Curzon partitioned Bengal dividing the largely Muslim-dominated eastern section from the Hindu dominated western part. But the strategy didn’t last long as Bengal was reunited in 1911. After oppressing India for 200 years, draining its wealth and filling their own coffers, the U.K. ripped the Indian subcontinent into pieces just before they finally left. The partition of 1947 that came along with India’s independence left nearly one million dead and 13 million displaced. Billions of dollars were lost in property left behind.