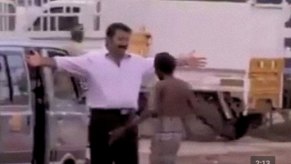 In some societies such as in India certain “classes” of people are considered worthless and “untouchable” (Dalits).

Here is a beautiful story of one man who grew up in a “higher class” (Brahmin) but started caring for the “untouchables” and treating them with equal respect, love and dignity.
Background :

is a member of the highest caste or varna in Hinduism. The Brahmins are the caste from which Hindu priests are drawn, and are responsible for teaching and maintaining sacred knowledge.
Dalit :

The word “Dalit” means “broken, ground-down, downtrodden, or oppressed.” Those previously known as Untouchables, Depressed Classes, and Harijans are today increasingly adopting the term “Dalit” as a name for themselves. “Dalit” refers to one’s caste rather than class; it applies to members of those menial castes which have born the stigma of “untouchability” because of the extreme impurity and pollution connected with their traditional occupations. Dalits are ‘outcastes’ falling outside the traditional four-fold caste system consisting of the hereditary Brahmin, Kshatriya, Vaishya, and Shudra classes; they are considered impure and polluting and are therefore physically and socially excluded and isolated from the rest of society.

Dalits represent a community of 170 million in India, constituting 17% of the population. One out of every six Indians is Dalit, yet due to their caste identity Dalits regularly face discrimination and violence which prevent them from enjoying the basic human rights and dignity promised to all citizens of India.