Farah completes a magnificent double – and is hailed the best ever 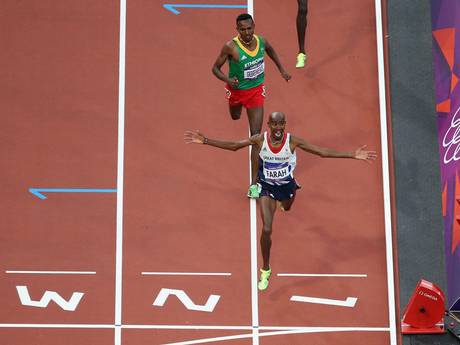 Mo Farah was last night acclaimed by Lord Coe as Britain’s greatest ever runner after he joined the elite company of athletes who have won both the 5,000 metres and the 10,000 metres at an Olympic Games.

In a performance that was the crowning glory of this utterly memorable Olympics for Britain, he triumphed in a race that was agonisingly tactical. Its wonderful conclusion built like the climax of a complex drama. At times in the 12½ lap race, Farah was deep in the pack; at others, he seemed to tease his supporters and rivals by threatening to make a break for home.

He finally – and conclusively – did so with nearly two laps to go, and, showing formidable and sustained speed, held off the Ethiopian and Kenyan challenge to earn a victory that outdid in its magnificence even that of the previous Saturday.

The best pair of legs in Britain carried him home, but they must have been given added power by the growing roar of the 80,000-strong capacity crowd that built to a climax as he crossed the line. If he had been able to hear the yells of the millions watching and screaming encouragement at their televisions at home, he might have won by a street. Mo Farah, the man who warmed to Britain from the time he arrived here as a child from Somalia, has now in turn been embraced by the whole country.

He celebrated with his trademark forming of the letter M with both hands bowed on to the top of his head. It was a gesture which was then mimicked in tribute by Usain Bolt, the other great track star of these Games, after he had swept Jamaica to a world-record-breaking victory in the 4×100 metres relay.

Farah’s stunning win makes him one of only six men to claim the 5,000 metres and 10,000 metres titles at the same Olympics. He joins athletics superstars such as Czech Emil Zatopek, Soviet Vladimir Kuts, and Finland’s Lasse Viren, who did the double at both the 1972 and 1976 Games. Our greatest athlete said after his victory: “Two gold medals? Who would have thought that? It’s a dream, and everything worked out well. The crowd were amazing. They made an unbelievable noise.”

Mo’s gold was the 27th for Britain, Ed McKeever having won our 26th medal in the kayak sprint earlier in the day. Bantamweight boxer Luke Campbell from Hull then added a 28th, and Plymouth diver Tom Daley got a bronze to make this yet another Super Saturday.

And so, Britain’s sportsmen and women have in these Games had the time of their – and our – lives. They have given us, the flag-waving, face-painted, joyful crowds (and the rest of us, ticketless, bouncing up and down on the sofa at home), an experience outranking even 1966’s World Cup. You no longer have to be 50 or more to have witnessed at first hand British sporting immortality.

This will be Britain’s most successful Olympics ever. We may have won more medals at London 1908, but in those days there were only 22 countries competing and 2,008 athletes, a third of whom were British. This time there were 204 countries and around 10,500 competitors – an event of genuinely global involvement, as opposed to an Edwardian festival in which some events had only British entrants. Our third place in the medal table, with 62 so far, including the 28 golds, is far in excess of the 47 medals predicted by the British Olympic Association’s bravest optimists before the Games started.

Britain’s transformation has impressed beyond these shores. USA Today called London “The happiest place on Earth”, saying the “normally dour city, a place of weepy grey skies and chilly demeanour” had been “transformed into an enclave of smiling Olympic volunteers, efficient transit systems and joyful crowds.”

Almost eight million people have been to see the Games in person, making this likely to be the most watched Olympics of all time.

Jill Duncan, 88, from Banbury, Oxfordshire, was one of millions who cheered on Team GB at a big screen at the heart of the Olympic Park. She was at the 1948 Olympics too, and says the biggest change has been in the spectators. “People were more restrained and didn’t make much noise in 1948,” she said, barely able to hear over the cacophony of excitement around her. “I think it’s lovely that people shout now. It must make such a difference to the athletes.”

Lest anyone think we spectators have been so blasé about success that we can only get animated for a gold, consider the reception for Niger’s game rower, “the Sculling Sloth” Hamadou Djibo Issaka, and, yesterday, Britain’s Dominic King, who glad-handed the crowds in the Mall as he smilingly finished last in the 50km walk, 39 minutes behind the winner – an exhibition of how taking part at this level is a victory in itself. Jacques Rogge, president of the International Olympic Committee, hailed the Games for showing the “true spirit of Britain”, where “huge crowds have cheered not just their athletes but those of the world”.

But something else has stirred beyond a patriotic lump in the throat as yet another Union flag is run up the pole. These were our Games, and, a year on from last August’s riots, we have united rather than fractured, and all those involved, from Lord Coe to the officials, Army, police, and the man on the cycle track’s motorbike – have given us all reason to be, pardon the old-fashioned word, proud. And none deserve more credit than the 70,000-strong army of purple-and-red clad volunteers.

In two weeks, they have done more to progress the idea of the Big Society than David Cameron in years of speeches. The efforts of the Games Makers have been so good-humoured that the British Olympic Association’s Chairman, Colin Moynihan, has even called for them to be nominated as a team for Sports Personality of the Year. Tomorrow, a guard of honour made up of volunteers will applaud overseas athletes as they pass through a specially constructed Games terminal at Heathrow.

And, even as they depart, efforts are under way to ensure that, as far as capitalising on the nation’s new enthusiasm for sport goes, it will not be like Wimbledon, when, as Lord Coe pointed out, the rackets come out for a fortnight and are back in the cupboard under the stairs come August. Today, a nationwide campaign to capitalise on the enthusiasm for sport and volunteering is launched. A government-funded charity called Join In Local Sport will arrange for more than 5,000 sports clubs to open their doors next weekend and encourage new members to take part.

David Moorcroft, director of sport at Join In, said: “No host country has ever done what we are trying to do with the Join In weekend… to capture this magic moment for all time.”

There will be a time, later, for measuring how long the warmth generated by these Games will last. The Paralympics will prolong it – more tickets have been sold for this than any other previous such Games – but some of the glow is bound to fade. The harder realities of eurozone crises, Afghanistan, and bankers’ greed will soon return to our front pages. But, when we reflect on this summer, something will remain. Come what may, we’ll always have London 2012.

Hardly impartial – but the BBC’s been brilliant

As Mo Farah won gold in the 10,000m last weekend, BBC pundit Denise Lewis nearly broke her chair with excitement. She, along with fellow presenter Colin Jackson, got carried away in the moment as they cheered Farah on to victory – screaming, leaping and writhing with their backs to the TV cameras.

It’s likely that they were at least in part what the BBC director-general, Mark Thompson, had in mind when Helen Boaden, the BBC’s director of news, told staff in a memo that the DG was worried about impartiality, despite pretty much universal acclaim for what has been superlative coverage.

So how did the very same commentators react to Mo’s race last night? In exactly the same way, leaping around and yelling their heads off just as much as before, if not more. In truth, they could be forgiven: euphoric scenes in the BBC studio last night were replicated in living rooms and pubs throughout Britain. 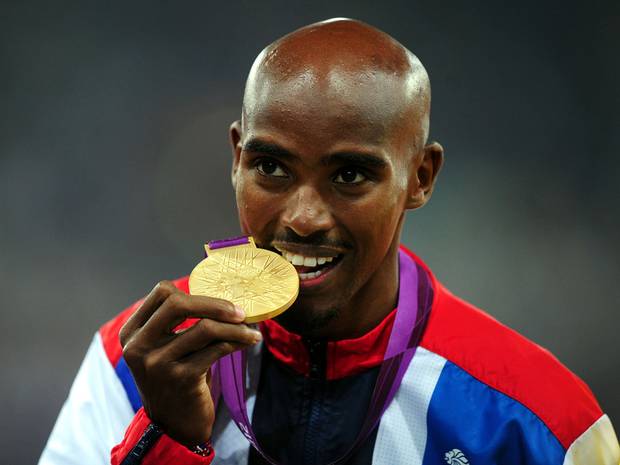 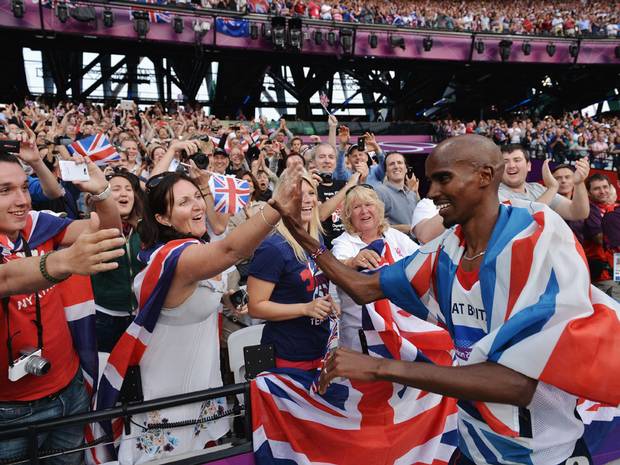 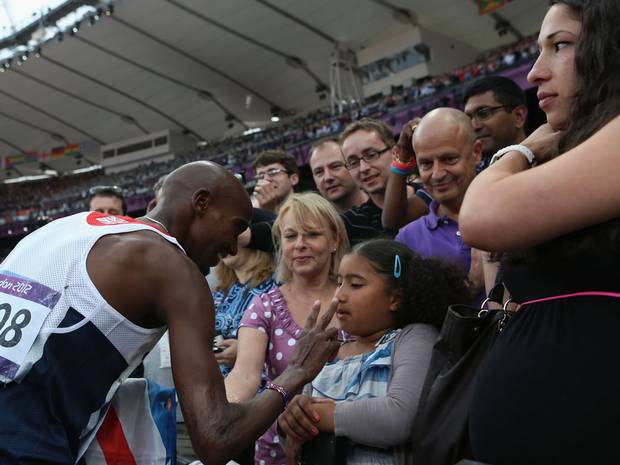