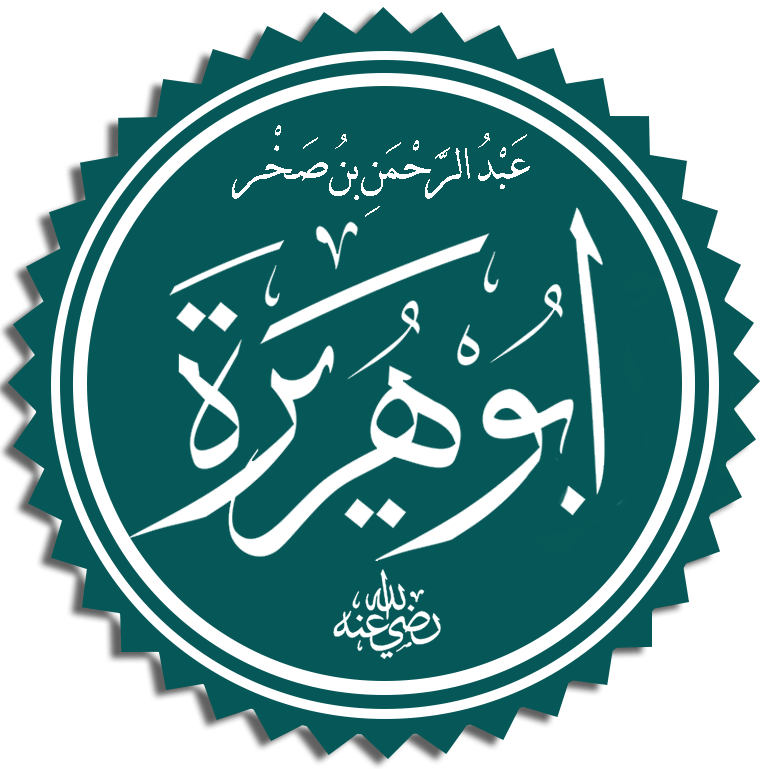 A Brief Biography of Abu Hurairah

Abd al-Rahman ibn Sakhr Ad-Dausi Al-Zahrani ( عبد الرحمن بن صخر الدوسي‎‎), better known as Abu Hurairah accepted Islam during the year of Khaibar (7H / 628AD). He then established and maintained a close relationship with the Prophet peace be upon him. He accompanied him wherever he went, seeking knowledge from him. Abu Hurairah was one of the most retainful companions of Prophetic traditions.

The Prophet, himself, attested to Abu Hurairah’s care and passion for the acquirement of knowledge and Prophetic traditions. Abu Hurairah is authentically reported to have said:

“Oh Messenger of Allah, I have heard many hadiths from you, and I fear that I may forget them. “

The Prophet peace be upon him said: “Spread your cloak [before me.”

[Abu Hurairah said:] So I did. He then placed his hands inside it, and he then told me: “Embrace it.” So I did. Since then, I have not forgotten a single hadith.” [Bukhari & Muslim]

Al-Bukhari said: “More than eight hundred men from the companions and tabi’in narrated from him. Among the companions who narrated from him were: Ibn Abbas, Ibn ‘Umar, Jabir b. Abdullah, Anas b. Malik, and Wathilah b. al-Aska’. He became the governor of Bahrain during the reign of ‘Umar. He eventually settled in Medinah, and that is where he died.

Others said: he died in al-‘Aqiq.

His burial prayer (janazah) was led by ‘Utbah b. Abi-Sufyan who was the governor of Medinah during the discharge of Marwān b. al-Ḥakam.

The Status of Abu Hurairah

In this brief section, we shall list some of the praise Abu Hurairah  has received from his contemporaries in order to dispel any doubts regarding his character. We have primarily relied upon authentic reprots, and we will point out any weakness or defects in them (if there are any.)

General Merits:
Al-Bukhari said that Abu Hurairah had 800 students from the Sahabah and Tabi’in who transmitted from him hadith. This alone is a major merit since the companions of the Prophet would not allow such an individual to prolifically disseminate Prophetic traditions if he was not suitable for such an important role. That number is a solid indicator that the man was evidently trustworthy in the eyes of the Sahabah and Tabi’in.

Al-Hakim in Al-Mustadrak 6/2224 listed twenty eight companions of the Prophet – peace be upon him – who transmitted hadiths from Abu Hurairah as evidence of his reliability.

Abu Hurairah was also a jurist who people used to consult for religious rulings, which is why Ibn Sa’ad mentioned him in his chapter as one of the fourteen companions who used to issue religious verdicts after the the Prophet – peace be upon him – (Al-Tabaqat Al-Kubra 2/312).

He also said: O’ Abu Hurairah, from amongst us, you used to attach yourself to the Messenger of Allah – peace be upon him – the most, and you were the best retainer of his hadith. (Al-Tirmidhi #3771)

Zaid bin Thabit narrated that the Prophet – peace be upon him – affirmed a supplication by Abu Hurairah in which he asks for knowledge that cannot be forgotten. (Tareekh Dimashq: Abu Hurairah #187.)

Abu Ayoob said: I prefer to narrate from Abu Hurairah [as an intermediary] than directly from the Prophet – peace be upon him.  (He meant that he trusts Abu Hurairah more than he trusts himself when it comes to the transmission of prophetic traditions

(Al-Mustadrak #6175. There is some anonymity with Ibrahim bin Bistam, but this narration has been narrated in Tareekh Dimashq through many alternative chains. See Tareekh Dimashq: Abu Hurairah #260-263.)

Abdullah b. ‘Abbas narrated the story of how `Ali was sent behind Abu Bakr to announce the verses of Surat-Bara’ah, since the Prophet – peace be upon him – said that only a man from his relatives may do so. So he reported that when Ali’s throat became soar from announcing it, he would let Abu Hurairah take his place and announce it to the people. (Al-Sunan al-Kubra, Bayhaqi 9/222.)

Abu Salih: “Abu Hurairah was one of the best companions at memorizing the hadiths of the Messenger – peace be upon him.” (Mustadrak Al-Hakim #6161.)

Abu Uthman Al-Nahdi said: “Abu Huraira, his wife, and his servant, used to have three shifts for each period of the night (for qiyam prayers).” (Al-Tabaqat Al-Kubra 5/248.)

Tawus: “Abu Hurairah did not let his daughter wear gold because he feared for her the heat of the hellfire. (Al-Tabaqaat Al-Kubra 5/245).

Maymun b. Mihran got into an argument with a sheikh who boasted about having heard hadiths from Abu Huraira, implying that he himself is knowledgeable. Maymun argued that not everyone who sat with Abu Hurairah had his heart with him at the time. In other words, according to Maymoon, only those that attentively listened to Abu Hurairah would become people of knowledge. (Al-Tabaqat Al-Kabeer 2/326).

This small list of merits we mentioned here is sufficient Insha-Allah to show the high status Abu Hurairah possessed in early Islamic society where he was revered for his knowledge and piety.

Abu Huraira: the Yemeni, the Dawsi (from the tribe of Daws), the companion, the jurist, and the ascetic.

Abu Huraira’s name will be often tied to one of the above adjectives, but what rings most commonly in the ear of the student of knowledge is the adjective: Hadithist, or hadith narrator.

Even though Abu Hurairah  converted to Islam at a late stage, around four years before the Prophet’s – peace be upon him – death, Abu Hurairah was able to narrate the largest amount of narrations out of all the companions.

It was due to this, that enemies of Islam sought to discredit him, in order to ultimately destroy the high status of the hadith system and library that Sunni Islam has amassed in its early years.

A common misconception that is brought forth by those that criticize Abu Hurairah is that he was able to narrate over five thousand hadiths, while only being with the Prophet – peace be upon him – for a relatively short time. The number often quoted is 5374. However, most readers aren’t aware that the number mentioned in this statistic is based upon Ibn Hazm’s book on the “Names of the Narrating Companions” and their numbers of hadiths. His statistics, as he admits himself, are based on the Musnad of Baqi bin Makhlad, which is one of the largest, if not the largest, hadith collection ever collected.

Firstly, all Muslims should be aware that most, if not all hadith collections include repetitions. These repetitions come in different forms. At times they include a shortening of a narration in order to focus on a specific part. At times, a hadith is repeated in order to provide another chain. In many cases, a hadith is repeating for the simple reason that the hadith is relevant in more than one chapter. An example is the famous hadith: “Actions are (accounted for) by their intentions.” This hadith is repeated several times in Saheeh Al-Bukhari, simply because it fits into many different chapters.

So, one may ask, how many narrations does one find from the path of Abu Hurairah in authentic collections?

Al-Hafith Al-Ala’ee counted the narrations in Saheeh Al-Bukhari and ended up a total of four hundred and eighteen narrations. See his Kashf Al-Niqab (p. 187).

Other points to add :

Abu Hurairah’s narrations without repetition are not 5,000+ rather they’re around 1,400 (according to the research of Dr. `Abduh Yamani and Diya’-ul-Deen al-A`zami).

Not all of these narrations were actually uttered by abu Hurairah, some are fabricated lies and are not authentic, which reduces the above number even more.

The vast majority of these narrations that remain were not exclusively narrated by abu Hurairah, rather you’ll find the same narration by abu Hurairah being related to us by other companions, this rules out the possibility of him “making it up”.

Some of Abu Hurairah’s narrations are not words or sayings from the Prophet (saw) so they’re not prophetic-Hadiths in the traditional sense, but he narrates some events he witnessed or describes certain things he saw such as battles, or the way the Prophet (saw) walked or the color of his turban and other details.

It has become a common misconception amongst rationalist Muslims and Shias that Abu Hurairah was a simple and ignorant man. This view is a general view given to all who are considered to fall under the category of muhadith (those who specialize in narrating hadiths) as opposed to the faqeeh (jurists), who use their intellect in understanding hadiths.

Similar accusations have been put forward to other muhaditheen of later generations, like Imam Ahmad, Al-Bukhari, Muslim, and other authors of hadith compilations.

However, this is far from true, as we find in I’ilam Al-Muwaqi’een by Ibn Al-Qayyim, that according to Ibn Hazm, Abu Hurairah is considered to be in the second tier of companions that were people of futya (that gave out religious rulings). This tier includes famous companions like Abu Bakr, Uthman bin Affan, Sa’ad bin Abi Waqqas, Abdulrahman bin Awf, Salman Al-Farsi, Jabir bin Abdullah, Mu’ath bin Jabal, Um Salama, and other famous companions.

Furthermore, Abu Hurairah was a multilingual companion, who lived in a setting (Al-Madinah) in which most people only spoke in Arabic. Not only does being multilingual have a major positive affect on brain activity and prevents dementia according to modern science, but also allows the people to have a greater access to his knowledge.

Other than the primary language of Arabic that Abu Hurairah grew up with, since he was a Yemeni from the Daws tribe, Abu Hurairah also spoke Abyssinian and Persian. Below, we have quoted two narrations that prove this little known fact.

Harith b. Abu Dhubab (and he was the first cousin of Abu Hurairah) said:

Abu Hurairah, I used to hear from you that you narrated to us along with this hadith and the other one also (there is no transitive disease), but now you observe silence about it. You used to say that Allah’s Messenger (ﷺ) said: There is no transitive disease. Abu Hurairah denied having any knowledge of that, but he said that the sick camel should not be taken to the healthy one. Harith, however, did not agree with him, which irritated Abu Hurairah and he said to him some words in the Abyssinian language.

While I was sitting with Abu Hurairah, a Persian woman came to him along with a son of hers. She had been divorced by her husband and they both claimed him. She said: Abu Hurairah, speaking to him in Persian, my husband wishes to take my son away. Abu Hurairah  said: Cast lots for him, saying it to her in a foreign language.

Even though it may seem extremely strange for Abu Hurairah to have learned and known these two languages, it should seem less of a surprise for those that are aware that Yemen was ruled by the Sassanid Persians and the Aksumite Abyssinians in the pre-Islamic era.