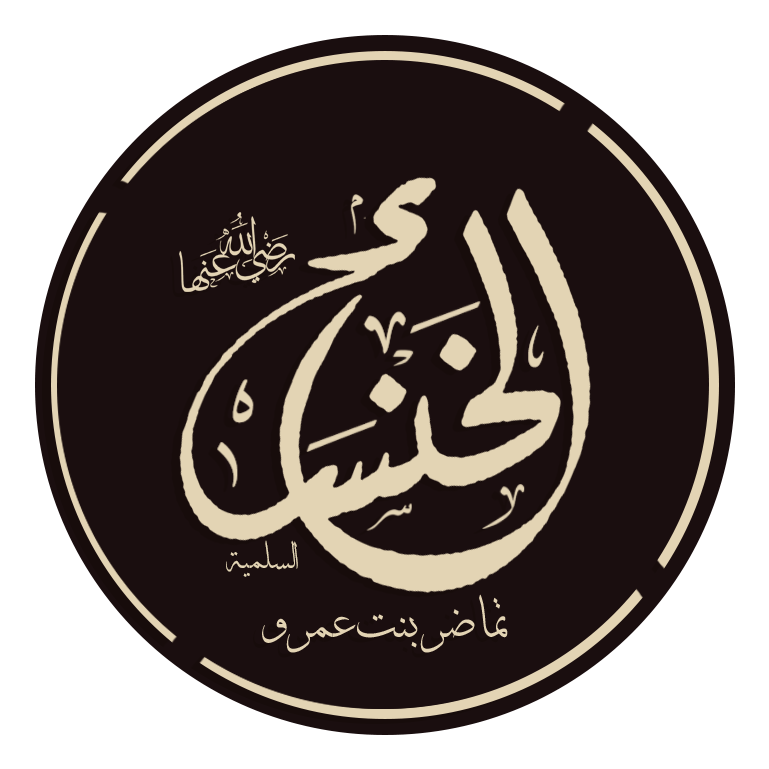 ‘‘Hey! Khanas!’’ -That was how the Prophet ﷺ hailed Khansa and encouraged her to recite more poems! It is normal for Arabs to shorten names in this manner, just as the Prophet ﷺ used to address ‘Aa’ishah رضي الله عنها as ‘Aa’ish.

Although the Prophet ﷺ was not a poet, and never composed poetry like poets, as an Arab he was able to appreciate good and well composed poetry. Indeed, he had Companions who were distinguished poets and he wouldn’t discourage them from reciting their poetry, especially since they had now adopted a new method in which there was no foolishness or straying which used to be characterised in the poetry of the time of ignorance.

One such distinguished poet among the Companions was Hassaan ibn Thaabit (may Allah be pleased with him) who devoted his poetry for the defence of Islam, the Prophet ﷺ and in support of the truth. He was so popular in this regard that he was conferred with the highest and noblest title of being, ‘The Messenger’s Poet’.

It was reported that he once wanted to refute the Quraysh’s poets’ and their false accusations against the Muslims after the Battle of Badr. The Messenger of Allah ﷺ asked him: “How can you ridicule them while I am one of them?” Hassan said,

“I will thread my way through them (with my satire) as a hair is carefully removed from the dough!!!”

The Prophet ﷺ then said, “Say (what you have to say of poetry), may the Holy Spirit (i.e. Gabriel) support you!”

In this way we can come to see how the Messenger of Allah ﷺ knew and appreciated the positive impacts of poetry and its impressive nature upon the minds of men. Therefore, he allowed Hassaan, Ka’b ibn Maalik and Abdullah ibn Rawaahah to make excellent use of their accurate and unfailing weapons of poetry in the battle between truth and falsehood.

It was also reported that ‘Abdullah ibn Rawahah recited a poem in the presence of Allah’s Messenger ﷺ during ‘Umrah al-Qada’ when he was about to enter Makkah. He was reported to have recited among other things, the following:

“O children of disbelievers! Keep off his (meaning the Prophet) way;

Today we are going to strike so hard that a head will be removed from its base and a man will be frightened away from his friend!

Allah has revealed in His Book that the best way to die is to be killed in His cause!

O Allah! I Believe in the Prince (with whom You sent the Book), and I believe that the only true way is to accept him!”

When ‘Umar heard this, he flew into a rage and wanted to stop ‘Abdullah from reciting more poems. He rebuked him saying,

“O son of Rawahah, are you reciting poems in the presence of Allah’s Messenger and in the sanctuary of Allah?!”

‘Umar (may Allah be pleased with him) was worried that this maybe disliked by Allah and his Messenger ﷺ .

But the Prophet ﷺ replied to him and took away his worry with his fine words: “Leave him alone ‘Umar. For, his poems hurt the disbelievers more than the throwing of arrows.”

Now that we have come to see how Islamic poetry was liked by the Prophet ﷺ , let’s now explore the life of the poetess: al-Khana’ رضي الله عنها.

Who was al-Khansa and what was her stance around the Messenger of Allah ﷺ ?

Al-Khansa belonged to the tribe of Banoo Sulaym. She was extremely beautiful, well mannered and very eloquent. She started reciting poems at a young age. Initially, she wouldn’t say more than two or three lines of poetry but it was her sorrow over the death of her brother Sakhr that refined and brought out her innate talent to recite long verses of poetry. After his death, she began reciting long, emotional and extremely stylish poems to eulogize Sakhr, as well as her brother Mu‘aawiyah.

The scholars of poetry and language unanimously agree that no other woman other than al-Khansa ever attained the level of poetry al-Khansa’ recited, neither before nor after her.

In her eulogy for her brother she said (what means):

“O’ my eyes, shed tears generously! Will you not weep for Sakhr, the generous?!

Will you not shed tears for the audacious, tall and handsome young man

who possessed qualities of leadership and who lead his people?!”

Al-Khansa came to Madeenah along with a delegation from Banoo Sulaym. She then embraced Islaam and became a good Muslimah. She pledged her allegiance to the Prophet ﷺ and remained truthful to it. The Messenger of Allah ﷺ heard her recite poetry and asked her to recite more, as has been mentioned earlier. He liked her poemsand addressed her warmly. This was the first manifestation of her being around the Messenger ﷺ .

Al-Khansa was of the noblest plants in terms of origin, growth and fruits. But her nobility in these aspects reached its peak in the Battle of Qaadisiyah. For, it was on the day of this great Islamic conquest that al-Khansa attained prominence for being one of the leading Muslim women of all times.

This prominence revolved around two things:

1) Her admonition to her four Mujaahid sons and

2) The statement she made after their martyrdom.

O mothers of today! O Muslim women! In al-Khansa’ there is am exemplary role-model for all of you. Perhaps, after reading her biography you will realise the reality of your role in this transient life and your weighty responsibility of building the true Muslim family, which in turn will bring about a strong Ummah.

“Al-Khansa’ bint ‘Amr witnessed the battle of Qaadisiyah with her four sons. She addressed them right at the eve of the battle saying,

‘My sons! You embraced Islaam and migrated willingly. By Allah, besides whom there is no other diety worthy of being worshiped, you are all sons of one man as you are sons of one woman. I have never cheated on your father. Never have I brought disgrace upon your uncle, disparaged your esteem or altered your lineage. You know the great and abundant reward that Allah has set aside for the Muslims who fight against the disbelievers. Know that the everlasting abode is better than this transient one. Allah (ta’aala) says: {O you have believe! Endure and be more patient [than your enemy], and guard your territory by stationing army units permanently at the places from where the enemy can attack you, and fear Allah, so that you may be successful.}

When you wake up tomorrow morning, Allah willing sound and healthy, go and fight against your enemy with conviction and seek Allah’s help over His enemies. When you see that the war has become tense, engage yourselves in the fight gallantly and resiliently that you may attain treasures and honour in the Abode of Eternity.’”

After this statement made by al-Khansa’ I have nothing better to say neither can I add anything. This is because her statement is beyond comment as it is comprehensive in the whole sense of the word.

“Her sons then left having accepted her admonition and were determined to implement her words. When the morning came, they set out early towards the battlefield and they all fought both gallantly and courageously until they were martyred, one after another.”

The news of their martyrdom was swiftly approaching al-Khansa’! What was her reaction? What was she going to say?

Here is where the greatness of al-Khansa truly manifested. When she heard of this great news she forgot her poetry, her beauty, her place among her people and all other things. She remembered nothing but Allah’s promise and the transient nature of this world. She رضي الله عنها said,

“All praise is due to Allah who honoured me with their martyrdom. And I hope that my Lord will make me join them in the Abode of His Mercy!”

It is noteworthy to add that the commander of the faithful, namely ‘Umar Ibn al-Khattab, used to give al-Khansa’ the entitlement of her four martyred sons annually which was two hundred dirhams until she died.

May Allah have mercy on al-Kahnsa’, the poetess! May Allah be pleased with this believing and patient lady! May Allah raise her ranks, just as she raised such pious, god-fearing and courageous sons. Aameen!