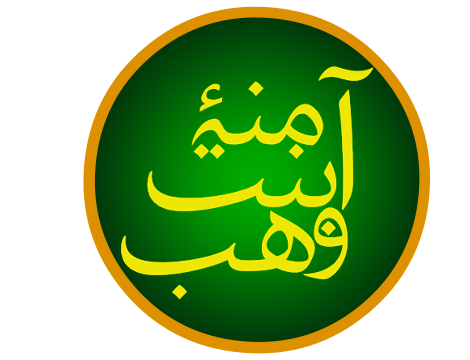 The womb of Aaminah bint Wahb was certainly the noblest and the most honorable of all wombs because it was the womb that carried the seal of all the Prophets and the leader of the Messengers ﷺ . It was in this womb that the noble fetus (Allah’s Messenger) settled. This seed had been passed down from the loins of men, generation after generation until Allah in His Divine wisdom decreed that it moved into ‘Abdullah ibn ‘Abdul Muttalib, the youthful Qurayshi who excelled his contemporaries in greatness. ‘Abdullah ibn ‘Abdul Muttalib was ransomed from slaughtering after his father had vowed to sacrifice him and had sought to fulfill his vow. He was the most precious person the Arabs had ever known.

He was not slaughtered by Allah’s will, so that the Divine choice might be actualized and firmly rooted in the history of mankind, all bearing witness to Allah’s absolute Will. There is no change in His Words and there is no preventer against what He has decreed.

“Allah chose Adam, Nooh [Noah], the family of Ibraheem [Abraham] and the family of ‘Imraan above the ‘Aalameen [mankind and jinn]. Offspring, one of the other, and Allah is the All-Hearer, All-Knower.” (Qur’an 3: 33-34)

‘Abdullah went out with his father ‘Abdul-Muttalib after he had been saved from being sacrificed. A woman from Bani Asad ibn ‘Abdul ‘Uzza then saw him beside the Ka’bah and said to him, after having looked into his face,

“You will be given the like of the camels that were sacrificed for your ransom if you cohabit with me now.”

This is because she saw something special in him. ‘Abdullah replied that it was better for him to die rather than to commit an unlawful thing and that for a nobleman to preserve his honor and religion was more worthy. ‘Abdul-Muttalib chose Aaminah bint Wahb of the Zuhr clan as a wife for his son ‘Abdullah. Aaminah was then the best Qurayshi woman in lineage and status.

A fortune-teller from Tibalah who was known as Fatimah bint Murr al-Khath’amiyah had also seen ‘Abdullah. This woman was one of the most beautiful and chast of Arab women. She saw the light of prophethood in the face of ‘Abdullah, she then offered herself in marriage to him but he rejected her offer.

The news of a Prophet that would come from the children of Ismaa’eel عَلَيْهِ ٱلسَّلَامُ‎, was spreading among the Arabs all over the peninsula. This news was based on what the people of the scripture had narrated and what they were informed from what was recorded in their Torah, both implicitly and explicitly. People were also finding this out from fortune-tellers and astrologers.

Even though ‘Abdullah ibn ‘Abdul Muttalib was a handsome youth, possessing an amazing and lofty upbringing and even though he possessed chastity and high morals and young women had sought him and asked for his hands in marriage, Allah had decreed that Aaminah would be ‘Abdullah’s wife.

Aminah’s womb soon bore the noble fetus of the Prophet. A few months after the pregnancy had taken place, ‘Abdullah undertook a journey to Syria (Syria according to Arab geographical terminology is a region consisting of Palestine, Jordan, present-day Syria and Lebanon. The city of Gaza, which is on the Palestinian coast was one of the major cities that Qurayshi merchants frequented). But on his way back, he fell ill and stayed with his maternal uncles from the tribe of Bani Najjaar in Yathrib, where they nursed and took care of him. Sadly, he died because of his fatal illness and his young wife was left as a widow

Aminah was traumatized by the death of her beloved husband, who had only lived with her for a few months after their marriage. She wept bitterly and wailed severely as her fetus had already become an orphan before it had even been born. But she pushed herself to stay strong and persevere. She found consolation in ‘Abdul-Muttalib who took good care of her and showed her much compassion. Her pregnancy was surprisingly very comfortable and easy.

In her dream one night someone came to her as she was sleeping and said to her,

“You are pregnant with the Leader and the Prophet of this Nation (Ummah).”

He came to her again, just before she was to give birth and said,

“Say after you deliver him, ‘I seek protection for him with the One (Allah) from the evil of every jealous person.’ Then name him ‘Muhammad’.”

In this way Aaminah continued to see dreams. More than once her dreams give her glad tidings, strengthened her, encouraged her to be patient, consoled her and indicated the greatness of the child to be born to her.

“When I delivered him, a light came out with him that illuminated all that was between the East and the West. The light illuminated palaces and markets of Syria until I saw the necks of the camels in Basra. I saw three erected flags: one at the East, one at the West and the third over the Ka’bah.”

‘Abdul-Muttalib, the Prophet’s ﷺ grandfather came and took the boy named Muhammad to the Ka’bah. While circumambulating the Ka’bah he said,

“Praise be to Allah Who gave me this important boy. I seek Allah’s protection for him.”

Some of the above was narrated by Aminah to Haleemah, the Prophet’s ﷺ wet nurse.

It is here that Haleemah bint Abi Dhu’ayb entered the life of Muhammad ﷺ as his second mother. But the first taste of milk that entered the Prophet’s noble stomach was by a woman named Thuwaybah, the freed maid of his uncle Abu Lahab (‘Abdul-‘Uzza ibn ‘Abdul-Muttalib) who dearly loved his brother ‘Abdullah. Abu Lahab was gravely saddened by the death of his brother and when his freed maid Thuwaybah came to him and broke the good news of the birth of Muhammad ﷺ to him, he was so happy that he set her free. That was the habit of the Arab noblemen, as a source of pride, happiness, and glory by them.

It appeared that Thuwaybah stayed with Aaminah for a few days after she delivered. Thuwaybah had also just given birth, hence she breastfed the Prophet ﷺ until Haleemah came and took him to the desert.

The role that Haleemah was to play in the Prophet’s early childhood was fundamental and important. His stay with her was full of important events.

Muhammad ﷺ was now back in Makkah and was enjoying the warmth of his mother Aminah’s love and the compassionate care of his grandfather, ‘Abdul-Muttalib. He was growing fast and his face was different from others as it shone forth illuminated light. His appearance brought splendor, his heart was filled with signs of guidance and transparence and his tongue was characterized with tenderness and sweetness. This was not surprising as he was being nurtured by Allah, the Exalted.

Aminah would often hug and embrace her beloved son. She would feel a unique warmth that she used to feel when she was pregnant with him. His grandfather was also dearly attached to him; ‘Abdul-Muttalib – the chief of Quraysh -could not bear Muhammad’s absence, and he would never tire from looking towards him. Every morning he would come to visit him at Aminah’s apartment and at different times of the day. He would ask her,

“How is my son Muhammad?”

And he would hold him and hug him with the utmost love a grandfather could have for his grandchild. He would see in Muhammad the image of his son ‘Abdullah who had died while still a bridegroom and whose death left in him unparalleled sorrow. What made him feel better was when he saw his grandson’s amazing characteristics which increased in him compassion and love for him.

When Muhammad ﷺ reached the age of six, his mother sought permission from ‘Abdul-Muttalib to go to Yathrib with her son in order to visit the grave of her beloved husband ‘Abdullah and to spend some time with his maternal uncles, the Banu Najjaar. He gave her permission to go and advised her to take good care of herself and her son. Aaminah set out with her son Muhammad ﷺ and Barakah, who was Aaminah’s maidservant, she used to serve Aaminah and take care of her son Muhammad ﷺ . This is why we see in Seerah the Prophet’s great love for Barakah (may Allah be pleased with her) and why he regarded her as a member of his household and family.

Aaminah felt great pain and sorrow when she stood beside the grave of her beloved husband. She cried profusely as she clung to her orphan child. It appeared that the fever of Yathrib had affected Aaminah before she left the city. She did not realise this until she was on her way back to Makkah. Her condition became worse and while at a village called Abwa’, she succumbed to her illness and breathed her last.

Muhammad ﷺ wept bitterly for his mother as she was never to return. He wasn’t left alone, as he had Barakah, the freed slave of his parents. Like a mother would carry her son, Barakah (may Allah be pleased with her) carried Muhammad ﷺ back to Makkah.