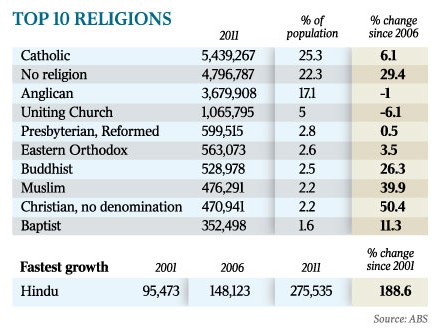 AUSTRALIANS are losing their faith with religion, census figures reveal, with close to 4.8 million people saying they have no affiliation.

For those who do believe, the greatest growth is among followers of Islam, with the number of Muslims up 40 per cent since the 2006 census.

The figures confirm the long-term trend in declining religious affiliation and the fall in Christian faiths.

The number of non-believers continues to rise, with 22 per cent of Australians saying they have “no religion”. The term includes people who filled in atheism, agnosticism, humanism or rationalism on the census form. The figure is a 29 per cent increase on 2006 figures. At that time 3.7 million Australians — 18 per cent of the population — reported having no religious affiliation.

The census data also reveals that 1.8 million people didn’t even answer the question on religion.

In relation to gender, women tend to be more religious than men.

Catholicism remains the most widely practised religion, with 5.4 million, or a quarter of all Australians, identifying themselves as Catholic. This was an increase of 6.1 per cent since the last census.

The Auxiliary Bishop of Sydney, Julian Porteous, told The Australian the increasing number of Catholics in Australia reflected worldwide trends. He said the success of World Youth Day, held in Sydney in 2008, had had “quite an impact”.

There are now 3.7 million Anglicans — less than the number of non-believers.

The Uniting Church suffered a 6.1 per cent fall in its ranks, with just over a million Australians identifying with it — down from 1.1 million in 2006.

The census reveals the breadth of Christian denominations being practised, from Baptist to Brethren, Eastern Orthodox, Pentecostal and Salvation Army.

The number of Australians who identified with “Australian Aboriginal traditional religions” was 7363.

People who said they were “new age” or believed in “theism” were included in the category “other religious groups”, which comprised 160,830 people.