Austria has had a checkered history when it comes to relations with Muslims, but its 100-year-old Law on Islam is seen as a symbol of tolerance.

The law gives Muslims the same rights as other officially recognised religions in Austria, such as Catholicism, Lutheranism, Judaism and Buddhism.

At the weekend senior members of the Austrian government and the country’s Islamic Community attended ceremonies to mark the centenary.

So Islam has been an officially recognised religion in Austria for 100 years.

Yet another historical event is probably more familiar to most people – the 1683 Siege of Vienna, when the Muslim Ottoman army’s advance on Christian-controlled Europe was halted.

And in recent years, the anti-Islamic rhetoric of some Austrian far-right politicians has made the headlines. 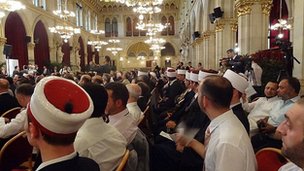 The Law on Islam, described as unique in Europe by members of the Austrian Islamic Community, guarantees Muslims in the country wide-ranging rights including religious education in state schools, administration of internal affairs and public worship.

In a speech at Vienna’s neo-Gothic town hall, the head of Austria’s Islamic Community, Fuat Sanac, described the law as an example for the rest of Europe. Islam in Austria, he said, was seen by most people as an enrichment, not as a danger.

Austria’s President Heinz Fischer, speaking at the same ceremony, called for peaceful and respectful relations. He stressed that Austria’s official religions, because of their legal status, were obliged to “respect and accept the laws of the state”.

A Vienna City councillor, Omar Al-Rawi, says the law does much to integrate Muslims into Austria, giving them a sense of being accepted.

“Austria is a model in Europe in dealing with Islam, but the Austrian Muslims are also a European model,” he said.

“The Muslims know that with rights there are also obligations and duties. And if you have a lot of rights and benefits, you also have something to lose,” he said.

“Austrian Muslims go all over the world saying we are Austrians, we belong to this country that gave us respect and recognition and gave us a lot of benefits that even some Muslim countries don’t enjoy. And that is why they are very proud saying that they are Austrians.”

The Law on Islam was brought into force in 1912, under the Habsburg Emperor Franz Joseph, as a result of Austria’s annexation of Bosnia-Hercegovina.

It began as an attempt to integrate Muslim Bosnian soldiers into the Habsburg Army, and referred at first just to adherents of the “Hanafi rite of Islam”. It was later expanded to include other forms of Sunni and Shia Islam, who are now all represented by the Austrian Islamic Community.

After the empire collapsed at the end of World War I, Austria’s Muslim population was reduced to a few hundred people.

But it started growing after World War II with the arrival of Turkish and Yugoslav workers in the 1960s and Bosnian refugees in the 1990s.

Now about half a million Muslims live in Austria, about 6% of the population. In Vienna, Islam is the second-largest religious grouping, after Roman Catholicism.

About 60,000 children take part in Muslim religious education classes in Austrian state schools, according to the Islamic Community. The classes are held in German.