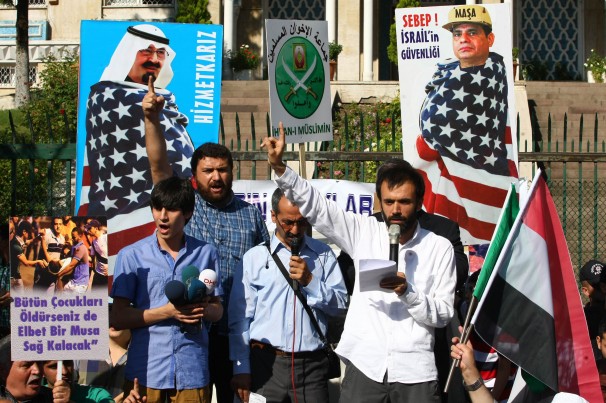 CAIRO — Saudi Arabia is emerging at the forefront of a forceful effort by Persian Gulf monarchies to back Egypt’s new military leaders, exacerbating a fierce struggle for influence in the chaotic and increasingly leaderless Arab world and putting the Saudis at odds with the United States, a long-standing ally.

On Monday, Saudi Arabia promised to compensate Egypt for any aid that Western countries might withdraw in response to the harsh tactics employed by Egypt’s leaders to quell protests by supporters of the country’s deposed president, in which nearly 1,000 peopleand more than 100 police officers are reported to have been killed.

Saudi Arabia is the largest contributor to a $12 billion aid package pledged by gulf countries since the July 3 coup that ousted President Mohamed Morsi, dwarfing the $1.5 billion in annual U.S. aid that congressional leaders are pressuring the Obama administration to suspend.

But the unusually bold foray into foreign policy represents a big risk for the traditionally staid and cautious kingdom, jeopardizing its reputation as the leader of the Muslim world, reigniting a simmering power struggle with rivals Qatar and Turkey, and potentially harming its relationship with Washington.

Saudi Arabia’s foreign minister, Prince Saud al-Faisal, portrayed the struggle in Egypt in almost existential terms Monday, referring to the country as “our second homeland” and emphasizing that Saudi Arabia will never allow it to be destabilized.

“Concerning those who announced stopping their assistance to Egypt or threatening to stop them, the Arab and Islamic nation is rich with its people and capabilities and will provide a helping hand to Egypt,” Faisal told the official Saudi news agency while on a visit to France.

Faisal’s pledge followed a rare foreign policy address on Friday, in which Saudi Arabia’s aging King Abdullah praised the actions of the Egyptian military and accused demonstrators of “terrorism, extremism and sedition.”

In Washington, State Department spokeswoman Jen Psaki said the Obama administration has made no decision to hold up economic or military aid to Egypt, although both programs are under review. “That review is ongoing,” she said. “But we have not made a decision to put a blanket hold.”

That Saudi Arabia is prepared to confront Washington over the crisis is an indicator of how deeply Saudi leaders were unsettled by the prospect of the Muslim Brotherhood consolidating its hold over the Arab world’s most populous nation, analysts say.

“It’s not about expansionism,” said Gamal Soltan, a professor of political science at the American University of Cairo. “The Saudis are doing these things out of fear rather than greed.”

But at a time when many Arabs are growing queasy at the high human cost of the crackdown, “this is an enormous gamble for the king,” said Christopher Davidson, professor of Middle East history at Durham University in England. “Saudi Arabia is putting itself in direct confrontation with the Muslim Brotherhood, which has broad regional sympathy across the region.”

It is also opening a new front in Riyadh’s ongoing rivalry with Qatar and Turkey, both of which have their own regional aspirations and were enthusiastic backers of Morsi’s Muslim Brotherhood-affiliated government.

Tiny Qatar’s outsize ambitions appeared to be tamped down in the weeks since the replacement in June of former ruler Hamad Bin Khalifa al-Thani by his son Tamim Bin Hamad al-Thani, 33. But Qatar has broken with Saudi Arabia, the United Arab Emirates and other monarchies to condemn the “excessive force” used by the Egyptian military against the protesters and to urge negotiations with the Brotherhood.

Turkey, whose own aspirations to serve as a model for the Arab world have been set back by the failure of its Syria policy and the toppling of Morsi, has emerged as the region’s most vocal critic of the crackdown, prompting some Egyptian television stations to cancel airings of popular Turkish soap operas.

The competition risks turning Egypt into an arena for regional power struggles, amplifying the divide that has polarized Egyptians, said Michael W. Hanna of the Century Foundation, much in the way that Syria’s conflict has been deepened and prolonged by global and regional rivalries.

Events in Syria have demonstrated how toxic the competition can be.

Attempts to form a unified opposition movement that could fill the vacuum should Assad fall were paralyzed almost from the outset by bickering between Saudi Arabia and Qatar over who would lead the organization. Last month, Saudi Arabia outmaneuvered Qatar to secure the leadership of the opposition coalition for one of its candidates, Ahmad al-Jarba, displacing leaders who had been backed by Doha.

The delay may have cost the opposition a chance to win wider international support for its efforts to present a viable alternative to Assad, said Amr al-Azm, an assistant professor of history at Shawnee State University in Ohio. Meanwhile, Qatar, Syria and Turkey have raced to arm rival factions of the rebel fighters battling Assad, contributing to the chaos prevailing on the battlefield and deterring repeated efforts to unite the hundreds of armed groups that have emerged.

It is unlikely that any regional power would go to the extent of backing armed factions in Egypt the way that they have in Syria, Hanna said. But with the violence in Egypt continuing to escalate at an alarming rate, the prospects that diplomatic intervention will help bring the two sides together will be dimmed.

“For any kind of multiple push to have a chance of success, you need Turkish and Saudi involvement,” he said. “You need all these players to agree on de-escalation to halt the spiral into cyclical violence.”

Who is supporting whom in the Arab world