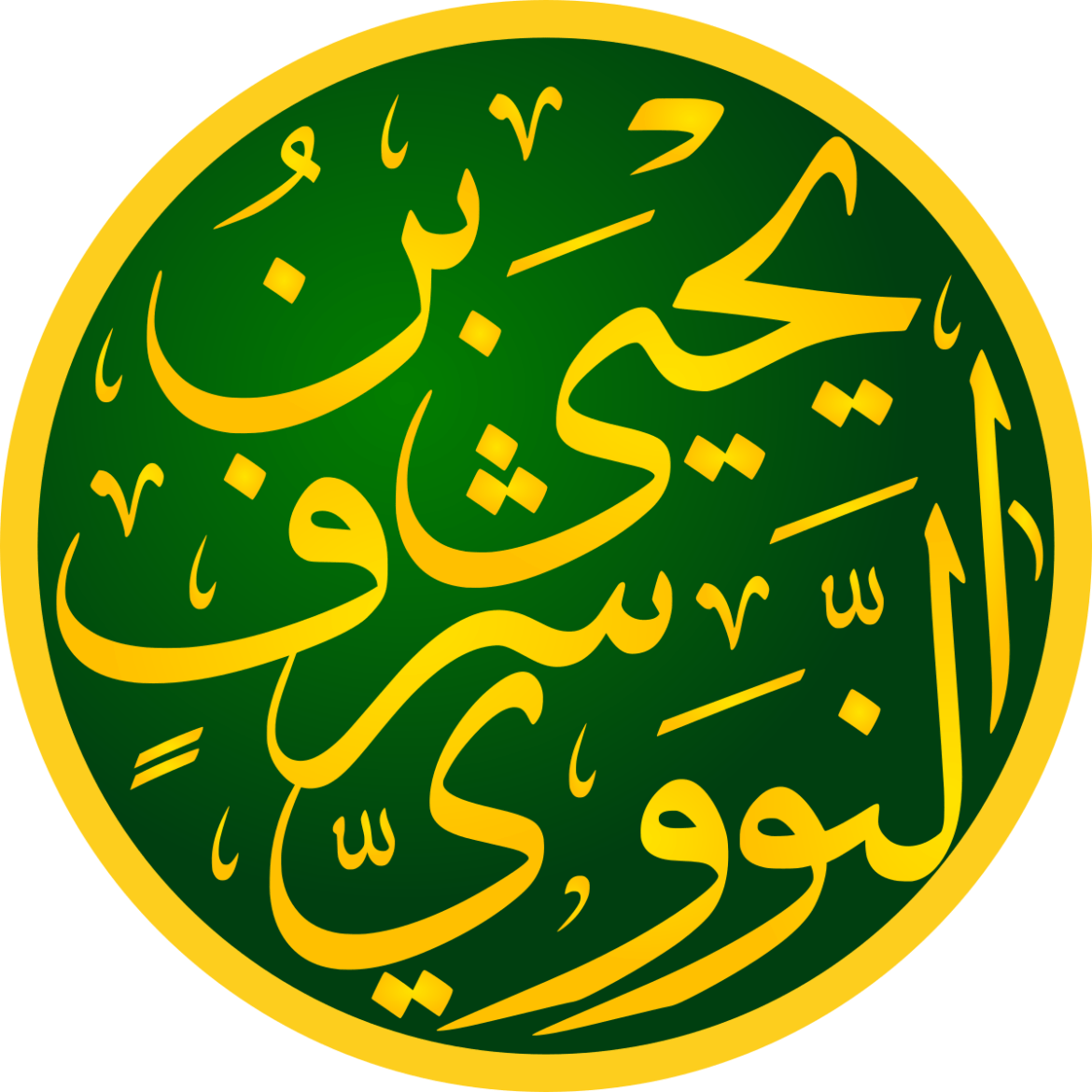 Yahya ibn Sharaf, Mubyi al-Din Abu Zakariyya al-Nawawi 1  ( 63 r-676 AH) the pious, ascetic, most learned, scrupulously Godwary, accomplished jurisprudent and hadith master, the impeccable Shaykh al-Islam by the unanimity of the people of the Sunna of the Prophet (Allah bless him and give him peace), fearless before kings, lordly and chaste, who died young yet, in a short life of 45 years, produced works of learning that made him the principal authority in the later Shafi’i school. He is the “the standard-bearer of the Friends of God” (al-Dhahabi); and he himself said, ” God has blessed me in the right use of my time,” in reference to Imam al-Nawawi’s remarkable scholarly output and achievements. Imam al-Nawawi is named after his hometown of Nawa near Damascus. He is “the Spiritual Pole of the noble Friends of God, the Legist of Humankind, the Reviver of the Sunna, and the Slayer of Innovation” (al-Sakhawi). May God bestow great and endless mercy on him, bless him, and reward him on behalf of every Muslim!

Imam al-Nawawi came to Damscus in 649 and lived in the Madrasa al-Rawwabiyya. In four and a half months, he memorized Abu Ishaq al-Shirazi’s manual of Shafi’i fiqh entitled al-Tanbih and a quarter of Abu Ishaq ibn Ahmad al-Muhadhdhab fi’l-Madhhab with his shaykh Ishaq ibn Ahmad al-Maghribi, after which he went on the Pilgrimage with his father-ailing during most of the trip–and took up residence in Madinah for a month and a half and then returned to Damascus.

In his early studies, the Imam said, ” It occurred to me to study medicine, so I bought the Qanun of Ibn Sina, when upon darkness filled my heart and I remained unable to work for several days. Then I came to my senses and sold the Qanun, after which light filled my heart.” Shaykh ‘Abd al-Fattah Abu Ghudda commented:

“In this way does God Most High create in souls attraction for one type of knowledge and aversion to another, proficiency in one, and deficiency in another; and in this, there are great examples of wisdom, both hidden and manifest.” 2

Al-Nawawi’s student ‘Ala al-Din Abu al-Hasan Ibn al-‘Attar said that the Imam every day read before his shaykhs the following: two sessions in Imam al-Ghazali’s al-Wasit; one in Abu Ishaq’s al-Muhadhdhab (both in Shafi’i jurisprudence); one in Ibn al-Ginni’s al-Luma’ in grammar; one in al-Jami bayn al-Sahihayn in hadith;3 one in Sahih Muslim; one in Abu Ishaq’s al-Luma’ and al-Fakhr al-Razi’s al-Muntakhab in the principles of jurisprudence; one in Ibn al-Sikkit’s Islah al-Mantiq in philology; one in morphology; one in the principles of jurisprudence; one in hadith narrator-criticism; and one in Islamic doctrine.

Imam al-Nawawi’s students include the orator Sadr al-Din Sulayman al-Ja’fari; Shihab al-Din al-Irbidi; Ibn Abl al-Fath; and the hadith master Imam al-Mizzi.
During his period of study, the Imam said that he spent six years during which he wasted absolutely no time, whether day or night. He was completely devoted to his studies, even when walking in the street. Only after this did he begin writing and teaching.

His Asceticism and Extremely Simple Living

Imam al-Nawawi was a strict ascetic in the manner of the early Muslims, neither eating nor sleeping except out of necessity. He fasted continually throughout the year, eating a simple dish at nightfall and drinking some water before dawn. This he did once every twenty-four hours. He avoided moist foods, such as fruits and cucumber, in order not to induce drowsiness. He dressed austerely, owning only one long shirt and a small turban. He divided his time between worship and learning.

Asked why he never allowed himself to eat food grown in Damascus, he said:

” Damascus abounds in endowments [awqaf] and properties restricted to those under legal guardianship, and to make use of them is impermissible except in the most appropriate and beneficial manner. In addition, the normal procedure in Damascus is to use one-crop sharecropping contracts, and there is disagreement [among the legists] about it [being lawful]: how then can I rest happy eating from this?”

His Superlative Mastership in Hadith and Jurisprudence

” In addition to his perseverance in the struggle against the ego, his application in scrupulous Godfearingness, watchfulness over his soul, the purification of the soul from its defects, and its discipline, he was also an accomplished master in hadith and its sciences, its narrators, the authentic and the defective, and a foremost authority in the [Shafi’i] school.” A recent study shows that Imam al-Nawawi’s verdict on narrator-commendation is generally identical to those of Imam Ibn al-Hajar al-‘Asqalani, a remarkable assessment in view of Ibn al-Hajar’s position as the greatest of all the hadith masters after the luminaries of the early centuries.4

His Fearless Admonishing of Princes

Imam al-Nawawi used to address those in power and admonish them for the sake of God, in accordance with the obligation of “admonishing [nasiha] princes” which he himself defined:

“Admonishing the leaders of the Muslims consists in … appraising them of any remiss of which they are unaware concerning the rights of Muslims.”

He did this several times in the palace of al-Malik al-Zahir who once exclaimed: “I am frightened of him!”

He took up the headmastership of Dar al-Hadith al-Ashrafiyya in Damascus after the death of his Shaykh Abu Shama in 665 AH and held it until his own death eleven years later, never accepting any compensation for his needs.

In the time of Imam al-Nawawi, Dar al-Hadith had the Noble Sandal of the Prophet (God bless him and give him peace) in its possession. The Sandal was kept in a wooden box above the Mihrab in its mosque. The mosque, however, was burnt by the Tatars and the relic disappeared, but the Mihrab remains to this day in the mosque of Dar al-Hadith’s preparatory school (headed by Shaykh Abu al-Khayr al-Midani), near the Umawi Mosque in Damascus.

In his brief but blessed life, Imam al-Nawawi authored nearly fifty books. These volumes are like their author-among the treasures of Islam and contain an immense blessing (baraka) bestowed by God. They are characterized by great diligence and scholarship. They are among the most relied-upon works of Islamic law and hadith in Islam. Some of them are listed below:

Al-Arba’una Hadith (The Forty Hadiths) is the most widely read collection of its kind, in which the Imam chose forty of the most important hadith that pertain to the spiritual and social life of the Muslims. It is a mark of divine approval of Imam al-Nawawi that God Most High has made him famous through this small booklet, as the Arba’un has been blessed for seven hundred years with unreserved approval and acceptance among Muslims worldwide.

Riyad al-Salihin ( Garden of the Righteous), one of the most widely read anthologies of the prophetic traditions focusing on personal ethics. It is comprised of 372 chapters spread over nineteen books, each chapter citing the verses of the Quran and authentic hadiths that pertain to the subject at hand. The Imam finished compiling the work in mid-Ramadan of 670 AH.

Al-Adhkar al-Muntakhaba min Kalam Sayyid al-Abrar (Supplications Chosen from the Discourse of the Master of the Pious) is a model in the genre unequaled by any similar work. It contains 349 chapters treating every situation Muslims face in their private and public life and adducing the supplication appropriate to each as related from the Prophet (God bless him and give him peace), with sound, fair, or weak chains of transmission. Imam Ibn Hajar al-‘Asqalani held six hundred and sixty classes devoted to the documentation of the Adhkar, some of which was recently published in three volumes. Imam Ibn ‘Allan al-Siddiqi wrote a nine-volume commentary on the Adhkar, titled al-Futuhat al-Rabbaniyya ‘ala’l-Adhkar al-Nawawiyya.

Wird al-Imam al-Nawawi is the Imam’s daily devotional supplications and invocations. Bustan al-‘Arifin fi’l-Zuhr wa’l-Tasawwuf (The Garden of the Knowers in Asceticism and Self-Purification) is a slim compendium of narrations that Imam al-Nawawi did not complete.

Irshad Tullab al-Haqa’iq ila Ma’rifat Sunan Khayr al-Khala’iq (Guiding Seekers of Truths to Knowing the Ways of the Best of All Creation), known simply as al-Irshad, is Imam al-Nawawi’s concise abridgment of Ibn al-Salah’s Muqaddima fi ‘Ulum al-Hadith, which he then condensed in the shorter al-Taqrib wa’l-Taysir Ii Ma’rifat Sunan al-Bashir al-Nadhir (Access and Facility to Knowing the Ways of the Bearer of Glad Tidings and Warner) . Taqrib received an illustrious commentary by Imam al-Suyuti in two volumes, Tadrib al-Rawi.

“I do not know in all the books of fiqh any that excels it.”6

(The Imam died-God have mercy on him and grant him Paradise! )-when he reached the chapters on usury, the Shaykh al-Islam al-Subki continued the work, which grew to about eighteen volumes.)

Al-Manthurat fi’l-Fiqh, better known as his Fatawa, is a single volume collected and published by his student Ibn al-‘Attar.

Tahdhib al-Asma’ wa’l-Lughat (Precise Rendition of Names and Dialects) is a four-volume reference manual containing a biography of the Prophet (God bless him and give him peace) and brief biographies of some of the figures of the first three Islamic Centuries and the four principal Imams of the schools of Sacred Law. It also includes geographical and lexical information. It is more extensive than what is included in the last chapter of the Tibyan.7

Returning to Nawa from a trip to Jerusalem and Hebron, the Imam and Friend of God died in his father’s house after a short illness. Al-Dhahabi said, ” His grave in Nawa is a place of visitation,” and the late Mufti of Lebanon, Shaykh Hasan Khalid, said, ” God Most High responds to supplication at the grave of Imam al-NawawL” Al-Dhahabi’s shaykh, Ibn Farah, said,

“Shaykh Muhyi al-Din reached three high stations, each of which would suffice to make its possessor someone people would travel to see: knowledge, asceticism, and command good and forbidding evil.”

In truth, for these three reasons and more, Imam al-Nawawi is most deserving of the title of Great Master (al-Shaykh al-Akbar) and Authority of Islam (Shaykh al-Islam).