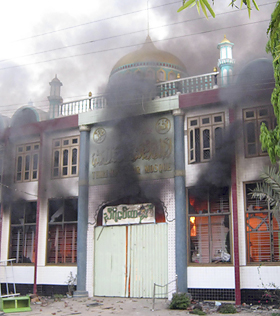 Recent violence in Myanmar between Buddhists and Muslims in the central town of Meikhtila (also spelt Meiktila) and areas beyond, which has left a reported 43 people dead, as many as 12,000 displaced, and more than 1,000 homes and building destroyed, has raised concerns over the stability of the country’s current democratic transition and the imposition of martial law in the troubled area has raised the specter of a return to direct military rule.

Muslim framing that has spread dangerously across the country.

Buddhist campaigns against Muslims, such as the increasingly visible Buddhist nationalist ”969” movement, seem to have inflamed tensions in Meikhtila and prompted outside observers to worry about the role of monks in encouraging discrimination and even violence against Myanmar’s minority Muslim population. [1] While Buddhist nationalism has long had the potential to be turned against non-Buddhist groups, Buddhism’s influence on politics and public opinion requires careful analysis in Myanmar’s contemporary context.

The Buddhist-Muslim conflict embodies a broader threat to democratic consolidation in Myanmar that reflects a common theme in Theravada Buddhist history, yet also represents only one potential interpretation of Buddhist principles. Violence and discrimination against Muslims is currently framed by some Buddhist groups as a necessary response to the imminent threat of Islam’s expansion into the Buddhist community; in a situation like this, some Buddhists have argued that any actions can be justified in order to protect the religion.

A compelling counter-argument, however, is rooted in Buddhist values and doctrine that prioritizes the democratic values of inclusion and tolerance as a better strategy for the long-term protection of Myanmar’s Buddhist community. The Pali wordsavanna refers not just to the Buddhist community of monks, nuns, and lay people, but to the very existence of the Buddha’s teachings. For Theravada Buddhists, this includes the texts of the Pali canon as well as the vast commentarial literature. The lived knowledge of those teachings among Buddhists is critically important, for without all of this enlightenment would be impossible.

Religious and political figures throughout Buddhist history have justified many violent, exclusionary acts by claiming to be acting “in defense of the savanna”. One of the earliest accounts is of the Sinhalese king Dutthagamani who defeated a Tamil king in approximately the first century BCE, declaring that his purpose was not to win territory but to protect the sasana. Monks even allegedly disrobed in order to join his army and fight.

When Dutthagamani experienced remorse at the bloodshed he had caused, his monastic advisers assured him that there was no need to worry. Only one and a half “people” had died at the hands of his army, one who had taken the Five Precepts (and who could be considered Buddhist, and therefore, human) and one who had taken a lesser vow. The rest were all non-Buddhists, less than human and not even deserving of consideration, let alone pity, according to the advisers.

Religious and political leaders have also employed “defense of the sasana” arguments in contemporary democratic contexts in order to justify bloody, anti-democratic policies, particularly violence against non-Buddhist religious groups perceived as a threat to Buddhism. In contemporary Sri Lanka, some nationalist monks exhorted the Buddhist-led government to press the prosecution of the war against the Tamil resistance (won in brutal fashion by the government in 2009) using imagery that invoked the legacy of Dutthagamani.

They were following in the footsteps of the controversial Sinhalese monk Walpola Rahula, who, in legitimizing monastic participation in politics in the 1970s, also commented approvingly of the belief of Dutthagamani’s monastic advisors that “the destruction of human beings [for the purpose of protecting the religion] was not a very grave crime”.

Some modern conflicts between Buddhists and non-Buddhists have not been explicitly framed by the rhetoric of defending the sasana, but the connection is still apparent. For example, national political leaders in Thailand have stressed that the ongoing conflict between Buddhists and Muslims in several southern provinces is simply evidence of lawlessness and banditry, or foreign influence. Yet the state has encouraged the formation of Buddhist citizen protection groups in response to the crisis (something that is also rumored to be happening now in Myanmar).

More importantly, the “protection of the sasana” argument no longer needs to be explicit in cases like Sri Lanka, Thailand, and Myanmar, where the identity of the Buddhist majority has effectively merged with the national identity. Calls to “defend the motherland” in these countries might appear to be simply nationalistic, yet the long-standing connection in Buddhist political thought between the integrity and strength of the state and the health of the religion suggests that many people view these conflicts through a religious lens.

The recent march of thousands of Buddhist monks in anti-Muslim protests across Myanmar makes it clear that they see the purification of the state and the protection of the sasana as coterminous processes. The 969 movement has launched a sort of “Buy Buddhist” campaign, urging Myanmar’s Buddhists to strengthen the sasana against the imagined threat of expansionist Islam by patronizing only Buddhist businesses; its logic suggests that the only way to protect Buddhism is to drive Islam completely out of the country by economically punishing local Muslim populations until they are forced to leave.

The Myanmar monk U Wirathu allegedly recently billed himself as the “Burmese Bin Laden”, saying he would use any means necessary to defend his religion and nation. He is a complex figure, having helped to organize recent citizen protests against police violence but also traveling the country giving sermons in which he demonizes Muslims and urges Buddhists to join the 969 boycott campaign.

While supporters of the 969 movement have billed it as a peaceful campaign to promote Buddhism, there are reports that “969” has been spray-painted on the walls of recently destroyed mosques in other cities in Myanmar, suggesting that at least some in the movement have adopted a more vindictive and retaliatory “defense” of Buddhism.

It is critical for scholars and policymakers analyzing recent events to recognize the persuasive force of religious reasons given in defense of discriminatory or exclusionary policies. This is a particular threat to continued reform in countries where democratic practices and values have not yet been consolidated, as is currently the case in Myanmar. At the moment in which the Buddhist sasana is threatened, democracy reverts to theocracy.

The argument for the defense of the sasana is so compelling and difficult to refute (what Buddhist wants to be accused of not defending the religion?) that it remains a powerful political tool. The recent conflicts in Myanmar likely have more localized and personalized causes, as people struggle to maintain stability in a transitional context of economic, political, and social uncertainty. However, the broader religious context allows Buddhists to portray Islam and the Muslim community as a threat to the sasana, despite the absence of evidence to support this claim.

The sasana is central to Buddhist belief and practice, and it would be unreasonable to expect any Buddhist to prioritize a set of worldly political institutions and practices over the Buddha’s teachings. A different response, however, would be to argue that a commitment to democratic principles need not be in opposition to defense of the sasana.

This type of argument has not yet been developed or advanced by Buddhist groups, although an increasing number of Buddhists and non-Buddhists alike have criticized the violent and exclusionary actions allegedly in defense of the sasana as antithetical to core Buddhist values.

One of the more compelling criticisms against the violence is that Buddhist discrimination against Muslim Rohingya or any other Muslim group is antithetical to the core Buddhist values of metta(loving-kindness) and karuna (compassion). These are two of the four qualities that are among the most noble and sublime attributes that a Buddhist can cultivate.

A key aspect of both metta and karuna is the non-discriminating quality of these characteristics. That is, the ideal of Buddhist practice is to cultivate the same feelings of loving-kindness and compassion toward every living being, including one’s enemies. Some explanations of metta and karuna mark these end cases, where the practice of compassion and loving-kindness is the most difficult, as the key moments of personal moral development where one overcomes prejudice and partiality.

The Myanmar Buddhist monks who marched against the previous military regime in 2007 chanted the metta sutta, a prayer of protection that texts relate the Buddha taught to some monks who wanted to meditate in a forest but were fearful of being attacked by wild animals. This prayer invokes a wish that all beings might be free from suffering, a far cry from current reports in the country that suggest Buddhist monks are encouraging their followers to shun and even attack those (Buddhist and non-Buddhist) who do something as simple as patronize a Muslim-owned business.

The argument for protection of the sasana has always relied on an “end justifies the means” logic, in which the preservation of the Buddhist community as a whole allows Buddhists to act in ways, including the promotion of hatred, discrimination and exclusion, that contravene the basic moral teachings of the religion. The counter-argument, however, is that the best way to preserve the sasana in the present and future and strengthen the moral practice of the community is to act in accordance with the basic values of the Buddha’s teachings in political, social and economic realms.

The dominant framing driving Buddhist anti-Muslim actions in Myanmar is one in which Muslims are posited as a threat to Buddhism, which appears to justify any number of anti-democratic, extra-legal, and violent actions. Not only does this “defense of the sasana” argument pose a threat to democratic consolidation in the country, it also fundamentally misreads the nature of threats to Buddhism in Myanmar.

Actions by Buddhists that contravene the basic values of the religion pose a much greater threat to the health of the sasana than the mere presence of other religions. In Myanmar’s current case, Buddhism and Buddhists are not inherently xenophobic, racist, fascistic, or anything else that they been labeled, but they have in recent paroxysms acquiesced to an intolerant and ultimately self-destructive interpretation of their religious values.

It is the responsibility of Buddhists, and especially monks, whose exalted position in Myanmar society allows them to influence public opinion, to develop alternate interpretations of Buddhist doctrine that denounce violence and insist that adherence to democratic values is indeed the best way to strengthen and defend the Buddhist community in a time of transition.

Matthew J Walton is an adjunct professor in political science at The George Washington University. This autumn, he will become the Aung San Suu Kyi Senior Research Fellow in Modern Burmese Studies at St Antony’s College, Oxford. He can be reached at mjwalton@gwu.edu.