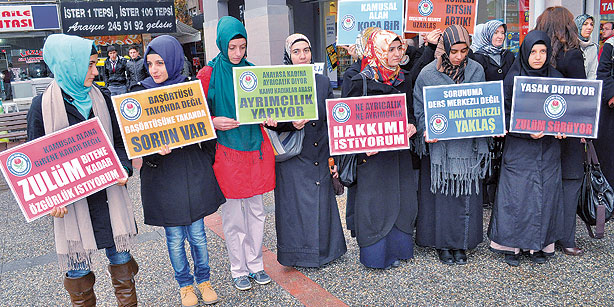 A group of headscarved women in Balıkesir are seen holding a demonstration to demand complete freedom to wear headscarves in the public sector in this 2012 file photo.

Members of Turkish civil society have welcomed partial freedom granted to covered women who want to work in the public sector in a newly announced democratization package, but called the measure insufficient because it excludes members of the judiciary and the security forces.
On Monday, Prime Minister Recep Tayyip Erdoğan announced the content of a long-awaited democratization package aimed at expanding freedoms for various social groups. Among other things, the package removes restrictions on the wearing of Islamic headscarves in public-sector workplaces. The ban, however, will remain in effect for judges, prosecutors and military personnel.

Turkey’s ban on headscarves dates to the 1980s. After the 1980 coup d’état, a regulation that defined the permissible clothing and appearance of public-sector employees included the stipulation that the hair of civil servants must be uncovered. Women who wear a headscarf were effectively denied the right to be employed by the state.

Havva Yılmaz, who has faced various obstacles in her academic career because of her choice to wear a headscarf, found the headscarf reform positive given the fact that covered university students faced obstacles in access to higher education only a few years ago; however, she said that depriving some professions of the freedom to wear a headscarf shows that prejudice against these women remains entrenched.

A ban on headscarves imposed for many years on university campuses was only removed in 2010 thanks to a circular sent to university administrations by the Higher Education Board (YÖK).

According to Yılmaz, preventing covered women from becoming judges, prosecutors or members of the military because of their attire shows a lack of faith in the ability of covered women to perform these jobs impartially.

“When a woman does not cover her head, she is thought to perform her duties with impartiality; but when she is covered, the opposite. Judging one’s impartiality by their attire is nonsense and saddening,” Yılmaz told Today’s Zaman.

She said that if the government was going to take such steps at all, it should have gone all the way and abolished the ban in one stroke.

“Such a move would serve better for normalization, but we will still continue our struggle for complete freedom,” Yılmaz added.

President of the Association of Human Rights and Solidarity for Oppressed Peoples (MAZLUM-DER) Ahmet Faruk Ünsal said the headscarf reform is a good start but criticized the exclusion of judiciary and military personnel.

When asked why the government left some professions outside the scope of the headscarf reform, he said Turkey still has some issues and that problems persist at some state institutions. This, he said, could be the reason that covered women were denied complete freedom.

For a long time, the Turkish military saw the headscarf as a threat to secularism. The military even meddled in politics during presidential elections with its April 27, 2007 memorandum because it was uneasy about then-presidential candidate Abdullah Gül’s wife’s wearing of the headscarf.

Sociologist Neslihan Akbulut Arıkan, also a member of the Women’s Rights Association Against Discrimination (AK-DER), is not completely satisfied with the headscarf reform as she believes there should be no restrictions for women if the ban is to be truly abolished.

“The scope of headscarf freedom has been expanded but there is no full freedom in question,” she told Today’s Zaman.

Arıkan said the headscarf ban began an arbitrary implementation in Turkey after the Feb. 28, 1997 coup as people discussed whether covered women should be allowed to enter this or that place. Retaining the ban for some professions, she continued, will encourage such behavior.

The ban was significantly tightened after the ’97 coup, when the military ousted a government it deemed too religious. Currently, state offices do not hire women who wear a headscarf. Though no law prohibits the headscarf in the private sector, covered women are also denied employment in most private companies. Nor are they elected to Parliament.

Addressing the argument that covered women cannot be impartial when working in certain professions, Arıkan said impartiality cannot be judged by attire.

“Today, no judge in Turkey wears a headscarf, they all leave their hair exposed. But there are many cases at the Supreme Court of Appeals and the European Court of Human Rights [ECtHR] filed by people with complaints that they did not receive impartial treatment at court. This shows that leaving one’s hair exposed does not automatically make one impartial,” she said.

Fatma Benli, a headscarf-wearing lawyer and the Turkish representative of the Union of International Jurists, told Today’s Zaman that it is good for Turkey to change regulations on the attire of public servants that included many provisions that were widely disregarded, yet she said it is very important to completely end discrimination.

“When there was a headscarf-wearing policewoman in the UK years ago, it is not right to exclude judges, prosecutors and military personnel from the scope of headscarf freedom in Turkey,” she said.