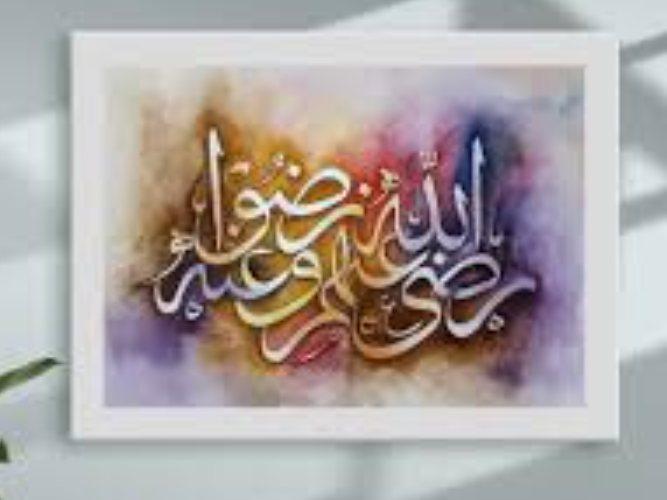 It was the fourth year after the Hijrah. The city of the Prophet ﷺ was still under threat from within and without. From within. the influential Jewish tribe. the Banu anNadir. broke their agreement with the Prophet ﷺ and made plans to kill him. For this, they were banished from the city. This was in the month of Safar.

Two months of uneasy quiet passed. Then the Prophet ﷺ received news that tribes from distant Najd were planning an attack. To pre-empt them. the Prophet ﷺ gathered a force of over four hundred men. and leaving one of his companions Uthman ibn Affan. in charge of the city, set out eastwards. Among this force was the young Madinan, Abbad ibn Bishr رضي الله عنه.

Arriving at Najd, the Prophet ﷺ found the habitations of the hostile tribes strangely deserted of men. Only women were about. The men had taken to the hills. Some of them regrouped and prepared to fight. The time of Salat al-Asr (the afternoon prayer) came. The Prophet ﷺ feared that the hostile tribesmen would attack them during prayer. He arranged the Muslims in ranks and divided them into two groups and performed the prayer as the Salat al-Khawf (the Prayer of Fear). With one group he performed one rakah while the other group stood on guard. For the second rakah the groups changed places. Each group completed its prayer with one rakah after the Prophet ﷺ had finished. On beholding the disciplined ranks of the Muslims the hostile tribesmen became uneasy and afraid. The Prophet ﷺ had made his presence felt and something of his mission was now known at first hand in the central highlands of Arabia whence he departed peacefully.

On the way back, the Prophet ﷺ pitched camp in a valley for a night. As soon as the Muslims had settled their camel mounts, the Prophet ﷺ , asked: “Who will be our guard tonight?” “We, O Messenger of God,” said Abbad ibn Bishr رضي الله عنه and Ammar ibn Yasir رضي الله عنه both of whom had been paired off as ‘brothers’ by the Prophet ﷺ when he arrived in Madinah after the Hijrah.

Abbad رضي الله عنه and Ammar رضي الله عنه left for the mouth of the valley to take up duty. Abbad saw that his “brother” was tired and asked him: “What part of the night do you wish to sleep, the first or the second?” “I shall sleep during the first part,” said Ammar who was soon fast asleep quite close to Abbad.

The night was clear, calm and peaceful. The stars, the trees, and the rocks all appeared to celebrate in silence the praises of their Lord. Abbad رضي الله عنه felt serene. There was no movement, no threatening sign. Why not spend the time in ibadah (worship) and reciting the Quran? How delightful it would be to combine the performance of Salat with the measured recitation of the Quran which he so much enjoyed.

In fact Abbad رضي الله عنهwas enthralled by the Quran from the moment he first heard it being recited by the mellow and beautiful voice of Musab ibn Umayr. That was before the Hijrah when Abbad رضي الله عنه was just about fifteen years old. The Quran had found a special place in his heart and day and night thereafter he would be heard repeating the glorious words of God so much so that he became known among the Prophet’s ﷺ companions as the “friend of the Quran”.

Late at night, the Prophet ﷺ  once stood up to perform the Tahajjud Prayer in Aishah’s house which adjoined the masjid. He heard a voice reciting the Quran, pure and sweet and as fresh as when the angel Jibril revealed the words to him. He asked: “Aishah, is that the voice of Abbad ibn Bishr رضي الله عنه?” “Yes, O Messenger of God,” replied Aishah. “O Lord, forgive him,” prayed the Prophet ﷺ  out of love for him.

And so in the stillness of the night, at the mouth of the valley in Najd, Abbad  رضي الله عنه stood up and faced the Qiblah. Raising his hand in surrender to God, he entered into the state of Prayer. Finishing the compulsory opening chapter of the Quran, he began reciting Surah al-Kahf in his sweet, captivating voice. Surah al-Kahf is a long Surah of one hundred and ten verses which deals in part with the virtues of faith, truth and patience and with the relativity of time.

While he was thus absorbed in reciting and reflecting upon the divine words, eternal words of illumination and wisdom, a stranger stalked the outskirts of the valley in search of Muhammad ﷺ and his followers. He was one of those who had planned to attack the Prophet ﷺ  but who had fled into the mountains on the approach of the MusIims. His wife whom he had left in the village had been taken as a hostage by one of the Muslims. When he eventually found that his wife was gone, he swore by al-Lat and al-Uzzah that he would pursue Muhammad and his companions and that he would not return unless he had drawn blood.

From a distance, the man saw the figure of Abbad رضي الله عنه silhouetted at the mouth of the valley and he knew that the Prophet ﷺ  and his followers must be inside the valley. Silently he drew his bow and let fly an arrow. Unerringly it embedded itself in Abbad’s رضي الله عنه flesh.

“Ya Subhanallah (Glory be to God)! Why didn’t you wake me when you were hit by the first arrow?” “I was in the midst of reciting verses of the Quran which filled my soul with awe and I did not want to cut short the recitation. The Prophet ﷺ had commanded me to commit this surah to memory. Death would have been dearer to me than that the recitation of this surah should be interrupted.”

Abbad’s رضي الله عنه devotion to the Quran was a sign of his intense devotion to and love for God, His Prophet ﷺ and His religion. The qualities he was known for were his constant immersion in ibadah, his heroic courage and his generosity in the path of God. At times of sacrifice and death, he would always be in the front line. When it was time for receiving his share of rewards, he would only be found after much effort and difficulty. He was always trustworthy in his dealings with the wealth of Muslims. All this was recognized. Aishah رضي الله عنها, the wife of the Prophet ﷺ , once said: “There are three persons among the Ansar whom no one could excel in virtue: Sad ibn Muadh رضي الله عنه, Usayd ibn Khudayr رضي الله عنه and Abbad ibn Bishr رضي الله عنه.”

Abbad رضي الله عنه died the death of a shahid (martyr) at the battle of Yamamah. Just before the battle he had a strong presentiment of death and martyrdom. He noticed that there was a lack of mutual confidence among the Muhajirin and Ansar. He was grieved and upset. He realized that there would be no success for the Muslims in these terrible battles unless the Muhajirin and Ansar were grouped in separate regiments so that it could be clearly seen who really bore their responsibility and who were truly steadfast in combat.

At the break of day when the battle commenced, Abbad ibn Bishr رضي الله عنه stood on a mound and shouted:

“O Ansar, distinguish yourselves among men. Destroy your scabbards. And do not forsake Islam.”

Abbad رضي الله عنه harangued the Ansar until about four hundred men gathered around him at the head of whom were Thabit ibn Qays رضي الله عنه, al-Baraa ibn Malik رضي الله عنه and Abu Dujanah رضي الله عنه, the keeper of the Prophet’s ﷺ sword. With this force, Abbad رضي الله عنه unleashed an offensive into the enemy’s rank s which blunted their thrust and drove them back to the “garden of death”.

At the walls of this garden, Abbad ibn Bishr  رضي الله عنه fell. So numerous were his wounds, he was hardly recognizable. He had lived, fought and died as a believer.