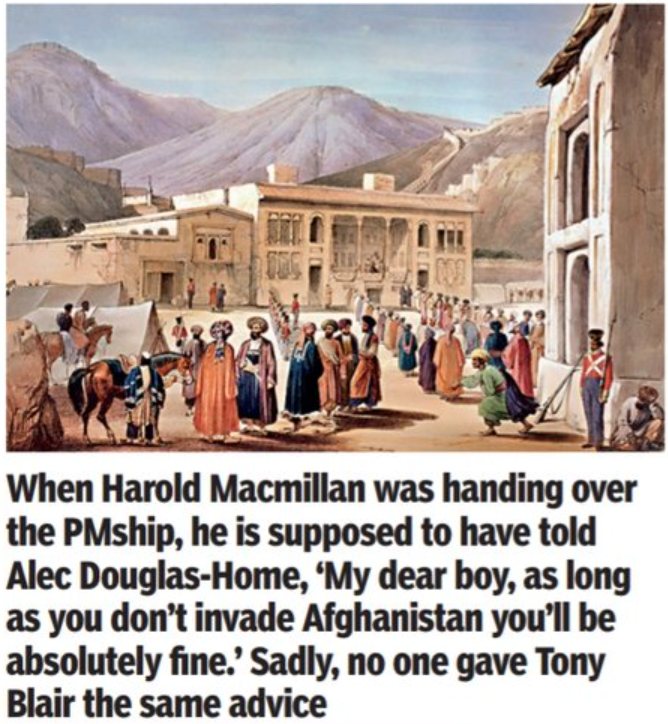 The First Anglo-Afghan War was arguably the greatest military humiliation ever suffered by a western power in South or Central Asia. On the retreat from Kabul, which began on Jan 6, 1842, of the 18,500 who left the East Indian Company cantonments, only one British citizen, the surgeon Dr Brydon, made it through to Jalalabad six days later. Almost all the sepoys who made up 90% of the force — most of them Brahmins and Rajputs from Bihar and UP — were either massacred or enslaved. An entire army affiliated to what was then the most powerful nation in the world was utterly destroyed by poorly equipped Afghan tribesmen.

A year later, the Rev G R Gleig wrote a history of this first disastrous, expensive and entirely avoidable entanglement of the West with Afghanistan. It was, he wrote,

“a war begun for no wise purpose, carried on with a strange mixture of rashness and timidity, brought to a close after suffering and disaster, without much glory attached either to the government which directed, or the great body of troops which waged it. Not one benefit, political or military, has been acquired with this war. Our eventual evacuation of the country resembled the retreat of an army defeated.”

As late as October 1963, when the British Prime Minister Harold Macmillan was handing over the prime ministership to Alec Douglas-Home, he is supposed to have called the younger man to his office and passed on some reassuring advice,

“My dear boy,” he said, looking down from his paper, “as long as you don’t invade Afghanistan you’ll be absolutely fine.”

Sadly, no one seems to have given the same advice to Tony Blair. In 2001, soon after the catastrophe of 9/11, Blair signed up with George Bush to invade Afghanistan yet again.
What followed was in many ways a replay of the first imperial invasion over 150 years earlier. The same tribal rivalries and the same battles were fought out in the same places 170 years later under the guise of new flags, new ideologies and new political puppeteers. The same cities were garrisoned by troops speaking the same languages, and they were attacked again from the same high passes. In both cases, the invaders thought they could walk in, perform regime change, and be out in a couple of years. In both cases, they were sucked into a much wider conflict.
Not only was the puppet ruler the British tried to install in 1839, Shah Shuja ul-Mulk, from the same Popalzai sub-tribe as Hamid Karzai, his principal opponents were Ghilzais, who today make up the bulk of the Taliban’s foot soldiers. Mullah Omar was a Ghilzai, just like Mohammad Shah Khan, the resistance fighter who supervised the slaughter of the British army in 1841. These parallels are frequently pointed out by the Taliban themselves:

“Everyone knows how Karzai was brought to Kabul and how he was seated on the defenseless throne of Shah Shuja,”

they announced in a press release.
For the Afghans, their eventual defeat of the British in 1842 has become a symbol of liberation from foreign invasion, and of the determination of Afghans to refuse to be ruled ever again by any foreign power. The diplomatic quarter of Kabul is after all still named after Wazir Akbar Khan, who is now remembered as the leading Afghan freedom fighter of 1841-2.
Then as now, the poverty of Afghanistan has meant that it has been impossible to tax the Afghans into financing their own occupation. Instead, the cost of policing such inaccessible territory has exhausted the occupier’s resources. For the last twenty years, the US spent more than $100 billion a year in Afghanistan. In both wars the decision to withdraw troops has turned on factors with little relevance to Afghanistan, namely the state of the economy and the vagaries of politics back home.
No one was more aware of these strange parallels than Hamid Karzai himself. When I first published my book on the First Anglo-Afghan war, Return of a King, he called me to Kabul, quizzed me on the details over several dinners at his palace, and substantially altered his policies to make sure he never repeated his forebear Shah Shuja’s mistakes. In a leaked email published in The New York Times after Wikileaks, Hillary Clinton blamed his reading of the book for a chilling of relations between Kabul and the White House during the Obama years.
Sadly his successor, Ashraf Ghani, learned nothing from the lessons of history. He had none of Karzai’s charm or diplomatic skills and must bear a large share of the responsibility for the collapse of his own regime: Ghani’s impatience, rudeness and arrogance alienated many tribal leaders and he entirely lacked the polite bonhomie that made Karzai a much more popular and acceptable figure. As we have seen, very few were willing to die to keep Ghani in power.
Meanwhile, the longer-term strategic picture is grim. Few will now trust American or NATO promises and the Americans have handed a major propaganda victory to their enemies everywhere. India has probably at least partially lost a leading regional ally and Pakistan’s ISI believes it has won a major victory. In 2009, I met some tribal elders from the village of Gandamak, where the British troops made their last stand in 1842. Already then, a decade before last weekend’s debacle, they could see the way the winds were blowing.

“All the Americans here know their game is over,” said one elder.
“It is just their politicians who deny this.” “These are the last days of the Americans,” said his friend.
“Next it will be China.”