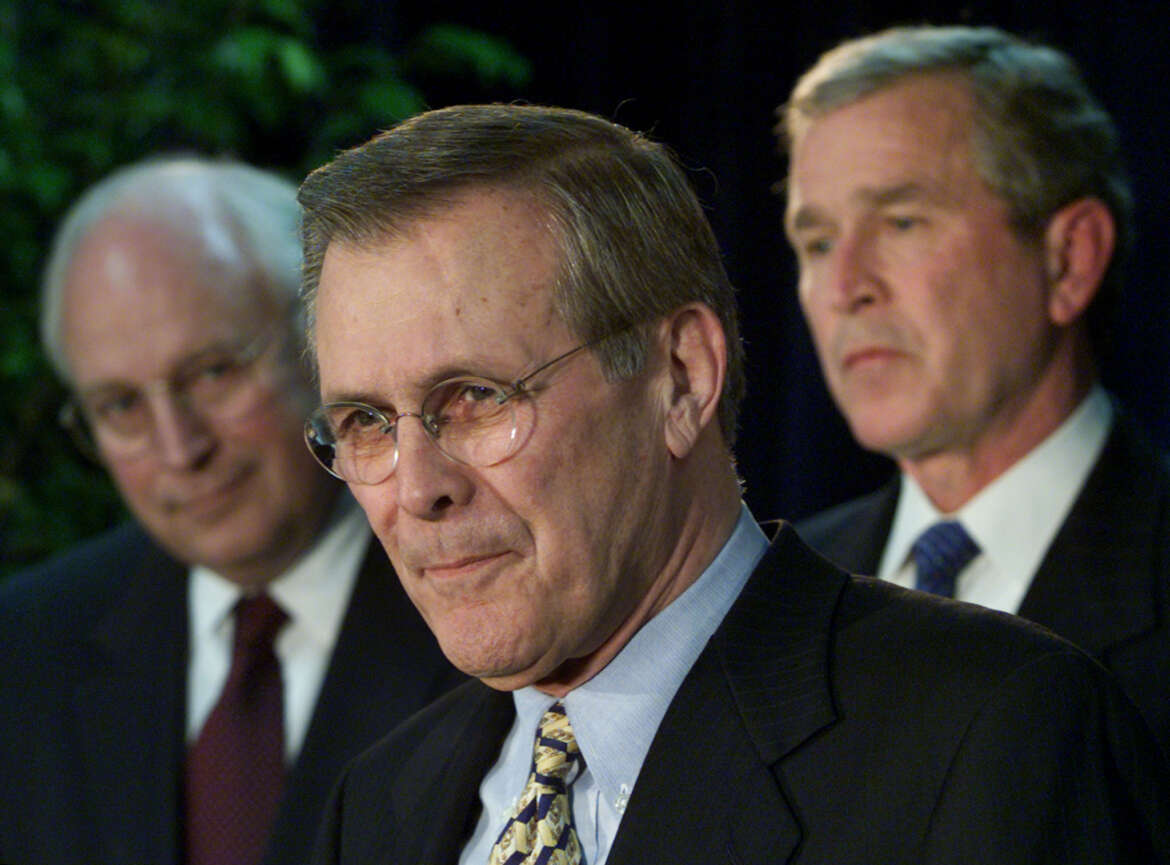 Do not mourn the defense secretary. Mourn his victims. There were nearly too many to tally, but his Pentagon refused to count anyway.

By Spencer Ackerman via  thedailybeast.com

The only thing tragic about the death of Donald Rumsfeld is that it didn’t occur in an Iraqi prison. Yet that was foreordained, considering how throughout his life inside the precincts of American national security, Rumsfeld escaped the consequences of decisions he made that ensured a violent, frightening end for hundreds of thousands of people.

An actuarial table of the deaths for which Donald Rumsfeld is responsible is difficult to assemble. In part, that’s a consequence of his policy, as defense secretary from 2001 to 2006, not to compile or release body counts, a PR strategy learned after disclosing the tolls eroded support for the Vietnam War. As a final obliteration, we cannot know, let alone name, all the dead.

But in 2018, Brown University’s Costs of War Project put together something that serves as the basis for an estimate. According to Neda C. Crawford, Brown’s political-science department chair, the Afghanistan war to that point claimed about 147,000 lives, to include 38,480 civilians; 58,596 Afghan soldiers and police (about as many American troops as died in Vietnam); and 2,401 U.S. servicemembers.

Rumsfeld was hardly the only person in the Bush administration responsible for the Afghanistan war. But in December 2001, under attack in Kandahar, where it had retreated from the advance of U.S. and Northern Alliance forces, the Taliban sought to broker a surrender—one acceptable to the U.S.-installed Afghan leader Hamid Karzai. At the Pentagon, Donald Rumsfeld refused. “I do not think there will be a negotiated end to the situation, that’s unacceptable to the United States,” he said. That statement reaped a 20-year war, making it fair to say that the subsequent deaths are on his head, even while acknowledging that Rumsfeld was hardly the only architect of the conflict.

Crawford in 2018 also tallied between 267,792 and 295,170 deaths to that point in Iraq. That is almost certainly a severe undercount, and it includes between a very conservatively estimated 182,000 to 204,000 civilians; over 41,000 Iraqi soldiers and police; and 4,550 U.S. servicemembers. As one of the driving forces behind the invasion and the driving force behind the occupation, Rumsfeld is in an elite category of responsibility for these deaths, alongside his protege Dick Cheney and the president they served, George W. Bush.

Rumsfeld’s depredations short of the wars of choice he oversaw—and yes, responding to 9/11 with war in Afghanistan was no less a choice than the unprovoked war of aggression in Iraq – were no less severe. His indifference to the suffering of others was hardly unique among American policymakers after 9/11, but his blitheness about it underscored the cruel essence of the enterprise. When passed a sheet of paper that, in bureaucratic language, pitched a torture technique of forcing men held captive at Guantanamo Bay to stand for hours on end, Rumsfeld scribbled a shrug on it: “I stand for 8-10 hours a day.” Months earlier, when Rumsfeld was banking on using the U.S. military to invade Iraq, a reporter asked about using U.S. forces to provide security for rebuilding Afghanistan at a moment before Taliban resistance coalesced. “Ah, peacekeeping,” he sneered in return, explaining that such tasks were beneath U.S. forces.

But to those forces, for whom he was responsible, he was no less indifferent. In Kuwait in December 2004, National Guardsmen preparing for deployment confronted Rumsfeld in the hope of enlisting his help with a dire circumstance. They were scrounging through scrap heaps for metal to weld onto their insufficiently armored vehicles so the RPGs they were sure to encounter wouldn’t kill them. Rumsfeld let it be known that the war mattered, not the warfighter. “You go to war with the Army you’ve got, not the Army you might want or wish to have at a later time,” he replied.

If Rumsfeld was indignant at the Guardsmen’s questions, it reflected the unreality he inhabited and the lies he told as easily as he breathed. He wrapped himself in a superficial understanding of epistemology (“there are known knowns; there are things we know we know. We also know there are known unknowns…”) that a compliant press treated as sagacity. He wore a mask of assuredness, a con man’s trick, as he said things that bore no resemblance to the truth, such as his September 2002 insistence that he possessed “bulletproof” evidence of a nonexistent alliance between Saddam Hussein and al-Qaeda. As resistance in Iraq coalesced in summer 2003, Rumsfeld said it couldn’t be “anything like a guerrilla war or an organized resistance,” even as a reporter quoted U.S. military doctrine explaining why it was. He insisted, “I don’t do quagmires” when quagmires were all he did.

He had reason to suspect he would get away with it. Manipulating the media was, to Rumsfeld, a known known, since reporters loved Rumsfeld before they hated him. U.S. News & World Report put a grinning Rumsfeld on the cover above the headline “Rum Punch.” (“A Secretary of War Unlike Any Other… You Got A Problem With That?”) Vanity Fair dispatched Annie Liebovitz to photograph him amongst Bush’s war cabinet. People magazine called him the “sexiest cabinet member” in 2002. A typical thumbsucker piece, this one in the Los Angeles Times of August 17, 2003, began with the falsity that “Donald H. Rumsfeld has won two wars and won them his way…” The conservative press reflected the subtext. “The Stud” was what National Review called the septuagenarian Rumsfeld as it depicted him in a come-hither pose.

The scale of death Rumsfeld—and Bush, and Cheney, and so on—is responsible for does not even make him the bloodiest American of his era. That would be Henry Kissinger, whom the historian Greg Grandin estimates is responsible for between three and four million dead. But American elites embrace Kissinger – and more recently Bush – in a way they never would embrace the post-Iraq Rumsfeld. Kissinger, after all, never raised sufficient ire amongst general officers to make his continued tenure impossible, as Rumsfeld experienced in the spring 2006 “Generals’ Revolt” that presaged his November 2006 downfall.

But getting rid of Rumsfeld only compounded the tragedy of his works, rather than alleviating them. For the generals who came for Rumsfeld did not come for his wars. They came to save the wars from Rumsfeld, prolonging their agony and futility with the convenient alibi that they could be won, if only a change atop the Pentagon came. With U.S. troops still in Iraq and President Biden adding caveat after caveat to his Afghanistan withdrawal, removing Donald Rumsfeld from the wars only permitted them to continue to this day. Rumsfeld never faced any accountability for what he did, only political eclipse, and wrote an inevitable memoir about why he was right and what he did was good.

Starting around two years after Bush accepted Rumsfeld’s resignation, I would walk up Connecticut Avenue, NW each morning to my newsroom near the so-called Hinckley Hilton. Frequently, I would see a wizened figure walking south from his Kalorama mansion down Connecticut as I headed north. He carried a metal cane, but he didn’t lean on it: he held it in each hand, parallel to the ground, as if he were walking a tightrope. His teeth would be bared as he drew back his lips in the facsimile of a grin so familiar from his post-9/11 press conferences. It was all weird, but I never approached him, as he was accompanied by a bodyguard who would flash me the keep-walking-pal expression.

For the potency and vigor Rumsfeld wanted to project, he moved delicately. An elderly man, he walked starting with his hips, swaying one foot outward before sweeping the other one forward, slow half-moons of motion as he carefully descended the hill north of Dupont Circle. How frail was this man who can lay claim to the deaths of at least 415,000 people, and how bitter it is that unlike them, his name will be remembered, even in infamy.