So, Egypt finally got a president after a year and a half of being ruled by the Supreme Council of Armed Forces, ever since Mubarak was toppled. Dr. Mohamed Morsi has hit a number of records. He is not only the first president of the post-revolution Egypt, but also the country first freely elected president since ancient Egypt! Also, he’s the first civilian to rule Egypt since it became a republic after the 1952 coup d’état, the first Islamist –Member of the Muslim Brotherhood (MB) – to rule Egypt, and he’s the first Qur’an-memorizer to rule after the fall of the Ottoman Empire.

This unique president has a unique wife. 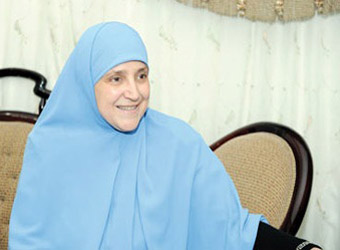 Mrs. Naglaa is the first hijab-wearing Egyptian First Lady. She wears the type of head covering the mainstream middle-class Egyptian women do.

Mrs. Naglaa Ali Mahmoud is the first hijab-wearing Egyptian First Lady. She wears the type of head covering the mainstream middle-class Egyptian women do; the one that goes down to the knees. She never took her husband’s last name, as it’s a Western convention that the Egyptian first ladies were used follow.

Mrs. Naglaa is Dr. Morsi’s cousin. She travelled with her husband to the US a year and a half after their marriage, and worked there as a translator. She joined university but did not continue until graduation because she was busy with marriage and kids. Like her husband, Mrs. Naglaa is a Qur’an-memorizing member of the MB. She works in community-service activities in the MB, especially in helping the newly married young women.

Some people are strongly against her appearance and see it as inappropriately backward. This group argues that Mrs. Naglaa is now Egypt’s first lady, whether  she  likes it or not, and that she has become a symbol of the country, so she has to look more sophisticated and elegant and she has to shake hands with male diplomats according to  protocol  .

Mahmoud Salem, one of the youth revolutionists who  failed in his bid to win a parliamentary seat in the  elections last year, wrote on twitter that her dressing code is scandalous, and she – as a symbol-  is not free to wear whatever she wants, just like Morsi is not free to hold meetings wearing pajamas [!]

On the other side of the spectrum, people – including some political opponents of Morsi’s – are very happy with his wife’s middle-class simple appearance that makes them feel related to her. She looks very familiar, dressing like millions of Egyptian women you can meet in the street, market, or bus stop.

Before the elections, Morsi was once asked in a talk show about his best achievement, he replied “marrying my wife”. The latter group agrees with this answer.

The Beauty and the Beastess

The New York Times wrote about her, “For some, she represents the democratic change that the revolution promised. She is a woman in the presidential palace that looks and lives like their sisters and mothers.”

Attending Morsi’s speech in Cairo University right after his swearing-in ceremony, Mrs. Naglaa sat at the end of the hall, not in a VIP front seat like a first lady should do. They both refused to move from their house to the presidential palace. She prefers being called Um Ahmed the traditional title that recognizes her as the mother of Ahmed; her oldest son. She refuses being dubbed “the first lady”, and declared, ”I’d rather be called the first servant”

Morsi and his wife were obviously emphasizing on their asceticism in any of the presidential prestige or luxuries.

All of the Egyptians are shocked by these facts, as they could not help but compare her to their last first lady, Suzanne Mubarak who is believed to be the root of all evil in Mubarak’s regime.

Under the title of “Egypt’s Mean Queen”, Newsweek published a lengthy story about Suzanne Mubarak last January. The story said that she “controlled Egypt behind the scenes, profiting from its misery.”

Newsweek described the 70-year-old half-British former first lady as “arrogant, deluded and out of touch [with the Egyptian people]”. It also quoted a former US official saying, “As Mubarak got older, indeed her influence and control became greater-and not in a good way. It was clear that the person who most opposed [the move to democracy] was not Mubarak himself, but Suzanne”

In her attempt to make gains through cultural activities, Suzanne introduced a program called “Reading for Everybody”, which published thousands of cheap, popular books for the poor (with her photo on each and every copy). She supported the children’s TV series “Sesame’s World”; the Egyptian version of the American series, Sesame Street. She put herself at the helm of countless NGOs; the Child Museum of Cairo in collaboration with the British Museum, the Egyptian Red Crescent society, and so on. Though she tried to focus on women issues,  but many feminists said, according to the Newsweek story, that she was never a feminist nor a human-rights defender, but rather largely self-serving and destructive. Mubarak’s regime even banned feminist NGOs!

Suzanne continued in building her own personal glory by moving internationally. Her activities in projects relating to human trafficking and family affairs became prominent in Egypt (while human trafficking was never one of Egypt’s problems). She led Egyptian’s U.N. delegation in conferences relating to women and children.

In 2008, Egyptian journalist Ibrahim Eissa was arrested for reporting on Hosni Mubarak’s health problems in August 2007. Suzanne then gave a rare television address to allege that her husband was healthy, and those who say otherwise deserve punishment. [!]

Mrs. Naglaa is strikingly the opposite of her predecessor.

The First Ladies of Egypt

After the 1952 coup d’état that initially aimed at overthrowing King Farouk and establishing “the Arab Republic of Egypt”, the first president was Mohammed Naguib  who stayed in the presidency for a year and a half and then followed by Gamal Abdul Nasser who stayed for 16 other years until he died.

The wives of both former presidents were away from the media and public life. They were just normal housewives. None of them was even once called “The First Lady” of Egypt.

Back then, the one who took this title was “Um Kolthom”, Egypt’s most prominent female singer of all times. She took this title due to her charitable community service activities she carried out.

Jihan Sadat, the half-British wife of the third president Anwar Sadat, then snatched this title, hence becoming the first president’s wife person to take the title, an action that angered Um Kolthoum and her fans.

Jihan worked in feminist and community service activities. She established women’s emancipation, education, and training society that trains women in various handicrafts. She also founded a city where handicapped war veterans can live with their families, and many more activities and initiatives.

Suzanne Mubarak came after her to add a political dimension to the activities and interventions of the First Lady.

Though all the above wives were Muslims, none of them wore Hijab.

At the end of the day, the main judging criterion of either Dr. Morsi or Mrs. Naglaa is their achievements, not their beard or hijab. So we have to wait and give them a try before judging them.