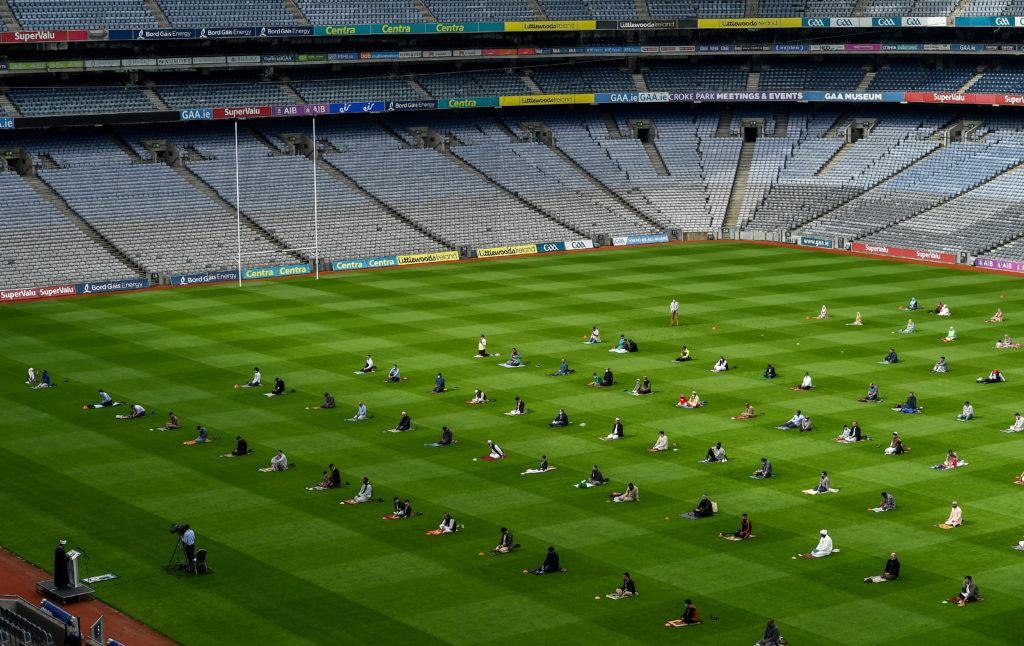 Hundreds of thousands of worshippers have gathered across the world to perform the first day of prayers for the Eid al Adha festival.

Muslims in many countries around the world have started celebrating Eid al Adha, the annual festival of sacrifice.

It marks the 12th and last month of the Muslim lunar calendar.

The event also marks the end of Hajj, a five-day pilgrimage to Saudi Arabia’s holy city of Mecca.

The Eid prayer, performed by Muslim worshippers across the world, kicks off the first day of the annual festival.

In Istanbul, thousands gathered in Hagia Sophia mosque in the early hours of Friday morning to attend Eid prayers for the first time since the iconic building’s reconversion into a mosque.

In Indonesia, home to the world’s largest population of Muslims, people were allowed to attend Eid prayers in mosques under strict health guidelines, including bringing their own prayer mats and praying several feet apart from one another. Worshippers were told to wear masks and are to refrain from shaking hands or hugging.

Authorities in Indonesia also ordered that meat be delivered door-to-door to the poor to avoid long lines.

An important part of the four-day Eid al Adha, or “Feast of Sacrifice,” is when Muslims slaughter livestock and distribute the meat to the poor.

The Saudi Health Ministry said there have been no cases of the Covid-19 illness among this year’s pilgrims after a scaled-down hajj.

This year as few as 1,000 pilgrims already residing in Saudi Arabia were allowed to perform the hajj.

The pandemic has pushed millions of people around the world closer to the brink of poverty, making it harder for many to fulfill the religious tradition of purchasing livestock.

Muslim leaders in Albania and Kosovo called on people “to be careful” in their festivities to avoid transmission of the virus, including limiting family visits.

Britain enforced new lockdown rules in Manchester and nearby parts of northern England in an ill-timed announcement on the eve of the festival.

In the Iraqi capital Baghdad, streets were largely empty due to a 10-day lockdown imposed by authorities to prevent further spread of the virus. Eid prayers in mosques were cancelled.

“We had hoped that the curfew would be lifted during the Eid period … we were surprised that the lockdown period included the Eid holiday and more,” said Marwan Madhat, a Baghdad cafe owner. “This will cause losses.”

Kosovo and the United Arab Emirates have also closed mosques to limit the spread of the virus.

Irish Muslims made history in Croke Park today after the sporting grounds hosted the Islamic celebration of Eid al Adha.

Around 200 worshippers sent a message to the world as they gathered in prayer on the iconic pitch to celebrate their religious holiday – the holiest of Islamic celebrations.

Leader of the Muslim community in Ireland, Shaykh Umar Al-Qadri told those watching that the celebration showed that Ireland is a country that accepts its diversity.

He said: “We are here in this historic iconic venue, Croke Park, to perform our Eid (celebration).

“Thank you to the management of Croke Park, to the GAA. Thank you to Ireland, because today this Eid prayer is sending a very strong message out to the whole world that Ireland is indeed a country of Ceid Mile Failte.