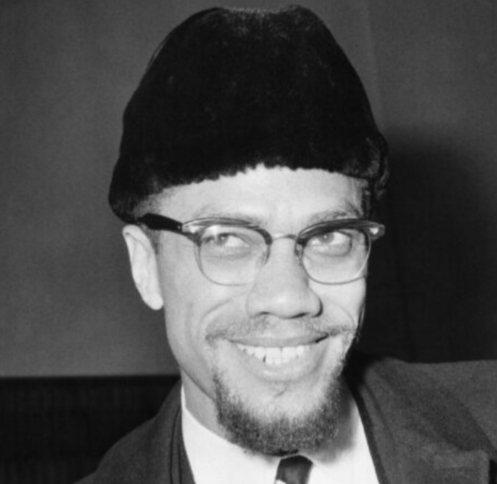 By Roy Ahmad Jackson – Roy Ahmad Jackson has been a lecturer and writer on religion and philosophy for over fifteen years. He has lectured in Islamic Studies at various universities, including the University of Durham and King’s College London. He has previously written books on Nietzsche, Plato, Islam and the philosophy of religion.

El-Shabazz (1925–1965), El-Shabazz, better known as ‘Malcolm X’, was a powerful and influential African-American activist of the twentieth century and defender of black liberation in the United States. His speeches and activities had a significant influence on the black nationalist and black separatist movements during the 1950s and 1960s. He has been many things to many people, from Pan-Africanist, to the father of Black Power, and a socialist. He associated with the Nation of Islam, but later in life he rejected their views in favour of orthodox Sunni Islam, taking the name of El-Hajj Malik El-Shabazz, although he did not reject the name Malcolm X. He was murdered just three months before his fortieth birthday.

Malcolm X was born Malcolm Little in Omaha, Nebraska on 19 May 1925. His mother, Louise Norton Little, had the full-time occupation of rearing eight children. His father, Earl Little, was a Baptist preacher and an outspoken promoter of social and economic independence for blacks and a supporter of Marcus Garvey’s ‘Back to Africa’ movement. As a result of his father’s outspokenness, the family experienced a number of confrontations with racism. Earl received death threats from the white supremacist Black Legion, forcing the family to relocate twice before Malcolm’s fourth birthday. However, in 1929, their house in Lansing, Michigan, was burned down and, two years later, Earl’s mutilated body was found across trolley tracks. The police declared this to be the result of an accident. Malcolm’s mother suffered an emotional breakdown several years later and was committed to a mental institution. The children were consequently split up among various foster homes and orphanages.

Malcolm was placed in a foster home and then in a reform school. Malcolm was an intelligent student at junior high school, graduating as top of his class but, according to his autobiography, Malcolm became disillusioned with education when his favourite teacher told him that his dream of becoming a lawyer was ‘no realistic goal for a nigger’. Malcolm, as a result, dropped out from school and, at the age of 17, moved to the Harlem neighbourhood of New York City where he committed petty crimes. Known as ‘Detroit Red’ he was soon coordinating various narcotic, prostitution and gambling rings. At the age of 20 he was arrested and convicted on burglary charges, given a ten-year sentence. However, prison proved to be a place to further his education as he immersed himself in the teachings of the Nation of Islam (NOI), the black Muslim group founded by Wallace D. Fard and led by Elijah Muhammad (Elijah Poole). Elijah Muhammad taught that white society actively worked to keep African-Americans from empowering themselves and from achieving political, economic and social success. Among other goals, the Nation of Islam fought for a state of their own, separate from one inhabited by white people. Unlike traditional Islam, however, the NOI had a racist tendency in that it declared that whites were the ‘devil by nature’ and that God was black. The NOI predicted that in the near future there would be a great war in which the white people would be destroyed and black people would rule the world under Allah. In preparation for this new order, Black Muslims were required to practise self restraint, opposing the use of drugs or alcohol.

Malcolm submitted to the strict discipline of the NOI and immersed himself in the Qur’an and the Bible. During his prison spell he became a powerful and persuasive orator and won a debate on capital punishment when he led the prison debating team against the Massachusetts Institute of Technology. When he was paroled in 1952, Malcolm went to Detroit, Michigan and joined the NOI temple in that city. He considered ‘Little’ a slave name and adopted ‘X’ to signify his lost tribal name. In 1958, he married Betty Sanders (later known as Betty Shabazz) and they had six daughters. He quickly rose in the ranks of the NOI and, in 1954, Elijah Muhammad appointed him as chief minister of Harlem’s main temple. Through national speaking engagements, television appearances, and by establishing the movement’s main information and propaganda newspaper, Muhammad Speaks, Malcolm X helped put the NOI on the map.

Malcolm X’s charisma, drive and conviction attracted many new members and made him a more prominent spokesperson for the NOI than his mentor Elijah Muhammad. In 1952, membership of the NOI was 500, but by 1963 it had increased to 30,000. He was a sharp critic of civil rights leaders, notably Martin Luther King, for advocating integration into white society instead of building black institutions and defending themselves from racist violence. He argued that Western culture, and the Judaeo-Christian religious traditions on which it was based, were inherently racist and declared that nonviolence was the ‘philosophy of the fool’. As Malcolm X’s reputation soared, this caused tension with Elijah Muhammad and other NOI leaders, which was not helped when during the 1950s Malcolm X was critical of the view that white people were literally ‘devils’ and he also pushed for a stronger political response to racism, whereas the line of the NOI was to act as a religious self-help movement rather than participate in politics.

Tensions between Malcolm X and Elijah Muhammad increased when Malcolm X learned that his mentor was secretly having affairs with as many as six women in the Nation of Islam, some of which had resulted in children. Malcolm X had strictly adhered to the code of celibacy of the NOI until his marriage and he was deeply hurt by the deception of Elijah Muhammad, who asked Malcolm X to keep the matter quiet. Worse was to come when, in 1963, Malcolm X remarked after the death of President John F. Kennedy that it represented ‘the chickens coming home to roost’. This comment was, and still is, often taken out of context and was not intended to be disrespectful to the President, but rather that the violent treatment of blacks had now come back to the ‘roost’ with violence against a white President. However, the remark was seen, at best, as highly insensitive and led Muhammad to silence Malcolm X. Effectively, this was the same as denying Malcolm X as a member of the NOI and, rather than accepting the silence, he left the movement in 1964 and formed the Muslim Mosque, Inc., an Islamic movement devoted to working in the political sphere.

In the same year as his break with Elijah Muhammad, Malcolm X made his first pilgrimage to Mecca. This trip proved to be a transformative stage in his life, as Malcolm met ‘blonde-haired, blue-eyed men I could call my brothers’. On his return to the US he renamed himself El-Hajj Malik El-Shabazz (meaning ‘Malcolm – Malik – who is from the tribe of Shabazz and has made the Hajj’), converted to Sunni Islam, and announced that he had found the ‘true brotherhood’ of man, announcing that whites were no longer devils. Although he remained a strong believer in black self-determination, he no longer held racist tendencies towards whites. He formed the Organisation of Afro-American Unity (OAAU), an organisation inspired by the Organisation of African Unity (OAU) which consisted of independent African states. This group advocated racial solidarity and Malcolm X planned to submit to the United Nations a petition that documented human rights violations and acts of genocide against African Americans. He encouraged blacks to vote, to participate in the political system, and to work with whites and other racial groups for an end to racial discrimination. 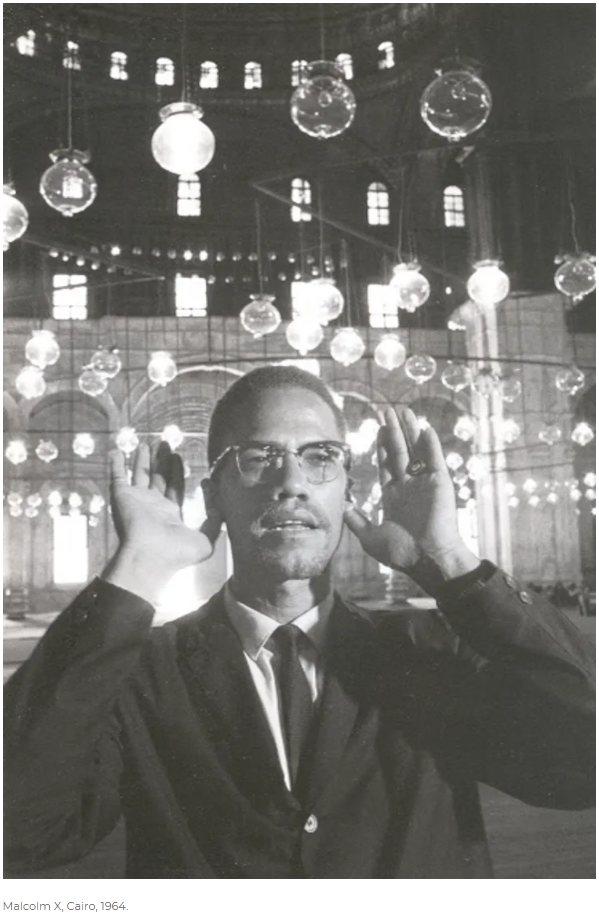 Malcolm X began a collaboration with the writer Alex Haley on an account of his life, and in this manuscript – which was later published as The Autobiography of Malcolm X (1965) – he predicted that he might not live to see the book published. This prediction proved to be true. Relations between Malcolm and the NOI were volatile and he had reason to believe he was targeted for assassination. On 15 February 1965, his house in East Elmhurst, New York, was firebombed, although the family escaped without physical injury, and Malcolm X rarely travelled without bodyguards. However, six days after the firebombing, three gunmen rushed onto the stage where Malcolm X was speaking and shot him fifteen times at close range. He was pronounced dead on arrival at New York’s Columbia Presbyterian Hospital. Fifteen hundred people attended his funeral in Harlem. Later that year, his wife Betty gave birth to their twin daughters. Malcolm’s assassins, Talmadge Hayer, Norman 3X Butler and Thomas 15X Johnson, were convicted of first-degree murder in March 1966. The three men were all members of the Nation of Islam.

Malcolm X exerted a significant impact on the Civil Rights Movement in the final year of his life. Black activists began to support his ideas on such things as racial pride and black-run institutions. He also gained a small following of radical Marxists, mostly Trotskyists in the Socialist Workers Party (SWP). His autobiography became a standard text for black movements and the legacy of Malcolm X has moved through generations as the subject of numerous documentaries, books and movies. A tremendous resurgence of interest occurred in 1992 when director Spike Lee released the acclaimed Malcolm X movie. The film received Oscar nominations for Best Actor (Denzel Washington) and Best Costume Design. The influence that orthodox Islam had on Malcolm X, as he developed a more universalistic outlook, was never allowed to bear fruit due to his untimely death, although it is an indication of the transformative power that the experience of the Hajj can have on an individual. It should be noted that the Nation of Islam, despite bearing the title ‘Islam’, deviates considerably from the teaching of orthodox Islam and, in fact, many of their principles are in flagrant contrast to orthodox Islamic ideals.

Malcolm X, aside from his autobiography, wrote a number of letters and articles on political alliances, women’s rights, inter-marriage, capitalism, socialism etc., and these are now readily available as collections. The first two of the following are collections of writings and speeches.

Here is only a short selection of what is now a vast corpus on not only Malcolm X, but related issues such as the Nation of Islam, and black activism.