You Are Here » Home » Quran » Expansion of the Universe In The Quran : Fact or Fiction ?

So far the verse in question would translate to as the following:

And the heaven We constructed/built it with strength/power and indeed, We lamūsi’ūna

لموسعون (lamūsi’ūna) contains the emphatic prefix lām. The prefixed particle lām is usually translated as “surely” or “indeed” and is used to add emphasis. So the word in question really is موسعون (mūsi’ūna).

Now the “ūna” or “oona” in the Arabic language represents a plural. The plural aspect is to denote the majesty and power of god. So the plurality is not in question. What is in question is the word موسع (mūsi) 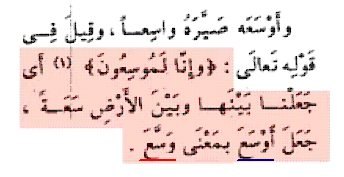 In the explanation of the word it is interesting to note that the author actually quotes the verse in question in his explanation. In the section highlighted the author states that the form 2 verb (Red Line) has the same meaning as the verb used in the verse (Blue Line)- to expand something.

In short the author states that the verb وسع (to expand something) has the same meaning as the verb أوسع.

This can be simply verified by using Google translator: 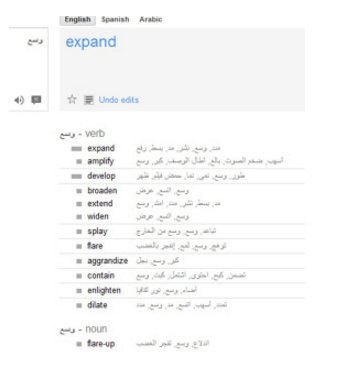 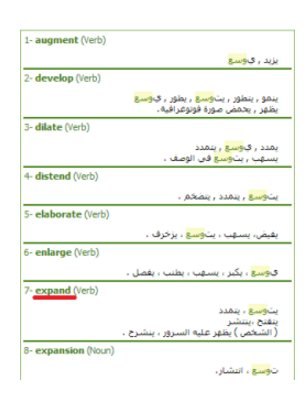 So from Lisan Al-Arab we have come to learn that the verb أوسع (Awsa’) means to expand. And موسع (mūsi) is the one who is engaged in أوسع (Awsa’) – The Expander. The one who engages in expanding.

So it is clear from classical Arabic that موسع (mūsi) can be translated two ways:

Does Tafsir and Opinions of Classical Scholars support this understanding?

In the commentary of this verse the Scholar gives the following three meanings for the wordموسعون (mūsi’ūna):

means: we are able to expand it as we want.

means :we expand the heaven in every direction.

means: we are able to expand it as we will.

means : we are able to make the heaven expanding more that it is already expanded.

The translation of the part highlighted in blue reads,

“{lamūsi’ūna } means (expanding) the heavens or what is between it and the earth or the (expanding of) sustenance.”

means : we are expanding it as we will.

Part of the miraculous nature of the Quran is that uses word(s) that have more than one meaning and all these meanings are intended. So in conclusion after looking at classical commentaries three meanings are given for the word موسعون (mūsi’ūna):

1. To encompass the heavens (Physically, Knowledge, Authority). This means that god encompasses it with his power and that he knows everything through his knowledge and has authority over it.
2. To provide for his creation. One who provides for his creation from the heavens. So physically, like the rain that comes down from the heavens. Or spiritually.
3. To physically expand. Meaning to continuously expand something or to make something vaster.

One who engages in act continually.

After looking at classical commentaries and classical Arabic dictionaries the word موسعون(mūsi’ūna) can be translated into English two ways:

This would translate the verse as following:

And the heaven We built it with strength and indeed, We are [its] expander.

This means that god is the one who is expanding the universe continually. This is the clear and literal meaning of the Arabic and is highly supported by classical Tafsirs. It is how Quranic Arabic Corpus have translated the word لموسعون (lamūsi’ūna):

It is further supported by the following translations of the Qur’an:

And the heaven We constructed with strength, and indeed, We are [its] expander. [Saheeh International]

And the sky was built by Us with might; and indeed We are the expanders. [Muhammad Taqi Usmani]

We have built the sky with might, and indeed it is We who are its expanders. [Ali Quli Qara’i]

And the heaven, We raised it high with power, and it is We that expand the vastness of space (or We are the expanders of it). [Hamid S. Aziz]

This would translate the verse as following:

And the heaven We built it with strength and indeed, We are expanding it.

Abu Ameenah Bilal Philips – who studied at the Islamic University of  Madeenah University and King Saud University and studied B.A. Islamic Studies ,M.A. Aqeedah, & PhD Islamic Theology – in his book Usool At-Tafseer, page 71, talks about  موسعون (mūsi’ūna) and how it means expanding and is an active participle.

“The heaven I created by might, and, verily, I am expanding it.

The Arabic word moos’ioon is an active participle. It indicates an ongoing action that is occurring at the present time and will continue into the future. It was not until the invention of the spectrograph and the development of a huge (100 in. diameter) reflecting telecope that Edward Hubble was able to discover other galaxies in 1926 and to document in 1927 the red shift of their spectra that indicates they are moving away from ours…”

Abul Ala Maududi in Tafhim al-Qur’an (The Meaning of the Quran) writes the following in the footnotes of Surah 51:47:

“The word must’ (pl. musi’un) may mean the one who possesses power and means, and also the one who can extend and expand something. According to the first meaning, the verse would mean: “We have built this heaven by Our own might and not with somebody else’s help, and its erection was in no way beyond Us. Then how can you ever conceive that We shall not be able to recreate it ?” According to the second meaning, it would mean: “This huge universe that We have created, is not a finished work, but We are expanding it continuously, and new and ever new manifestations of Our creation are appearing in it every moment. How do you then think that such a marvelous Creator would not be able to repeat His creation.”

It is further supported by the following translations of the Qur’an:

AND IT IS We who have built the universe with [Our creative] power; and, verily, it is We who are steadily expanding it. [Muhammad Asad]

And the heaven with its regions, spheres and realms of space did We skillfully, powerfully and authoritatively construct and We are expanding the universe. [Al-Muntakhab]

And We constructed the universe using matter, and We will expand it. [Progressive Muslims]

And the heaven, We have constructed it mightily, and it is surely We Who have vast power, and keep expanding it. [Ali Ünal]

And it is We Who have built the Universe, and behold, We are steadily expanding it. [Shabbir Ahmed]

With Our power and prowess, We brought into being the universe. And indeed, We expand it (steadily)! [Dr. Munir Munshey]

And We built the heavenly universe with great might. And surely, We are expanding (this universe) more and more. [Dr. Mohammad Tahir-ul-Qadri]

And the heaven: We constructed it with (Our Own) hands; and surely We are indeed those Who make expansion and create vastness. [Dr. Kamal Omar]

We constructed the universe with power, and We are expanding it. [Talal A. Itani]

I (God) have created the universe myself and will continue to expand it [confirmation of the expansion theory of the universe after the Big Bang.] [Bijan Moeinian]

We constructed the sky with our hands, and we will continue to expand it. [Rashad Khalifa]

f you are still unsure about the meaning of موسعون  (mūsi’ūna) and would like further information I recommend watching the following video which provides a summary of all the points I have mentioned :

In summary the Arabic word   موسعون (mūsi’ūna)  after exploring Classical Dictionaries and Classical Commentary’s means “The Expander” or “Expanding”. It is an active participle which means that the action is continuous meaning the expansion is continuous.

And the heaven We constructed/built it with strength/power and indeed, We are surely expanding it. [Quran 51:47]