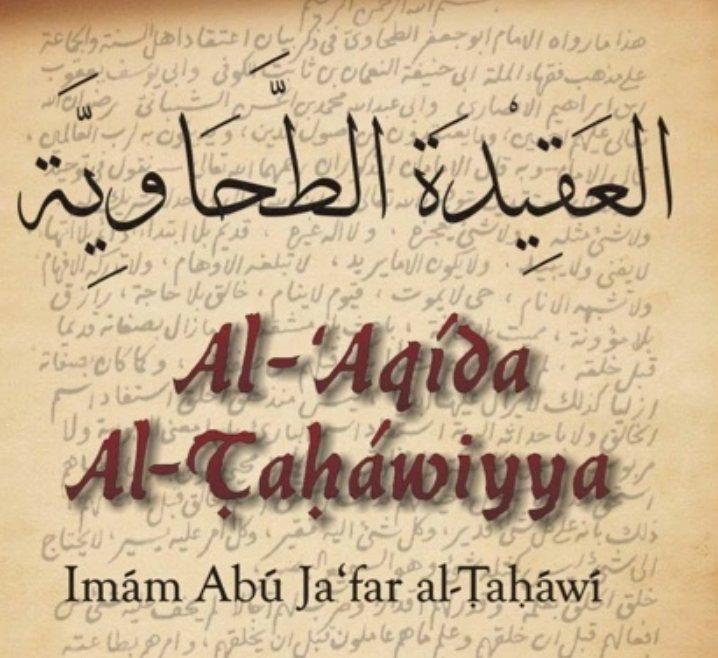 This is a presentation of the beliefs of Ahl al-Sunnah wa al-Jamā`a, according to the school of the jurists of this religion, Abū Hanīfa al-Nu`mān ibn Thābit al-Kūfī, Abū Yūsuf Ya`qūb ibn Ibrahīm al-Ansārī and Abū `Abdullāh Muhammad ibn al-Hasan al-Shaybānī, may Allāh be pleased with them all, and what they believe regarding the fundamentals of the religion and their faith in the Lord of the worlds.

1. The word used here is “hādha”, which is a demostrative pronoun. The intent of Imām alTahāwī is to mention what is in his heart at the time of writting his creed. The verifiying scholars (muhaqqiqūn) say that “this” refers to either something that is present outwardly, or something that is present inwardly in the person’s mind and heart-and that is the intention of Imām alTahāwī. Having said that, it is possible that he wrote the text of his creed before writting his introduction, in which case, the word “this” refers to what is outwardly present.

2. The word bayān means that which is in detail. Detailed speech is not general. General speech (mujmal) is that which is not complete without other details elsewhere to qualify it. So according to this, all that Imām al-Tahāwī has written in his creed is more than sufficient for acting upon in the realm of belief. So what is negated in his creed, is negated without exception, and what is affirmed in his creed, is affirmed without exception. Therefore, it is not possible for a person to object by saying: “Perhaps some of what he negated unrestrictedly is affirmed from one or several angles.” Meaning: what Imām al-Tahāwī negated unrestrictedly cannot in actuality be negated unrestrictedly, rather, one looks into the matter, and what is accepted is affirmed and what is not accepted is negated. This method of discourse does not hold water with the work of Imām al-Tahāwī, for if employed, it negates the fact that this creed is “bayān”. Examples of such objections will be shown in the explanation further on.

3. `Aqīdah comes from the word `aqd, which means that which binds or knots. In this sense, `aqīdah is sought in and of itself and sticks with the person completely. `Aqīdah is sought after for itself, not only because it is a condition for the validity of actions. Even if an action is not obligatory, `aqīdah is still neccesary-for it is the foundation of everything.

5. The word madhhab is a noun denoting place, taken from the verb dhahaba-yadhhabu-dhahab: literaly a place of going. A madhhab is a school of thought, having specific methods in establishing the grades of evidence and expressing certain understandings. As for the issues discussed in usūl al-dīn, Imām Abū Hanīfah had a particular method in explaining them. This does not imply that his actual beliefs were at odds with the other Sunni madhhabs. So, Imām Abū Hanīfa’s method in `aqīdah was somewhat different than that of Imām Abūl Hasan al-Ash`arī, although the differences between them were in styles of expressing the same truth, not differences in the actual creedal matters – save certain subsidiary issues.

It is possible to say that the expression usūl al-dīn covers those matters that are clear cut (qati`), both in issues of beliefs and actions.

It is also possible to say that the expression usūl al-dīn covers the fundamentals of both creed and fiqh – since the dīn itself encompasses both beliefs and actions; he then says:

We say about Allāh’s unity, believing by Allāh’s help that:

1. Allāh is One, without any partners.

3. There is nothing that can overwhelm Him.

4. There is no god other than Him.

1. Allāh is One without any partners. Something can only have a partner if it shares with it in some qualities. As for the one without any resembalence to anything, then He has no partners. Partnership neccesitates that the dominion is divided up and that one partner cannot take a hold of or manage the dominion of the other without permission – and that is false and invalid with respect to Allāh . He is al-Mālik (the King and Owner) alone. It is impossible for there to be a parter in His dominion for if there were, then He could not be called al-Mālik – the one who possesses everything.

2. There is nothing like Allāh. This is the universal principle of the tawhīd of Allāh. We shall delve into this point in more detail when we reach the sections where he addresses the corrupt beliefs of the anthropormorphists.

3. The meaning of the word used here, al-`ajz, means being incapable and unable to obtain what is sought after. Based upon this meaning, Imām al-Tahāwī is saying that nothing prevents Allāh from actualizing what He wants. Take notice of the fact that something or someone that prevents another must possess and will and power that is indpendant of the will and power of the one prevented. Without that, it is impossible for it to occur.

4. There is no deity besides Him. We shall delve into the details of the point further into the text Allāh willing.

5. The word al-Qadīm is derived from the word al-qidam. The technical meaning of al-qidam according to the scholar of this science is; without beggining. It does not mean existance within time that has no beginning because time itself is a creation of Allāh and Allāh does not have anything of His creation eternally coexisting along with Him. This description of Allāh as alQadīm- both directly and indirectly is found in some of the primary texts such as the narration in the Sunan of Abū Dawūd in which it states that the Messenger of Allāh, ﷺ would say upon entering the Masjid:

“I seek refuge with Allāh the Almighty, and with His Noble Wajh, and with his beginingless Authority from the accursed Satan.”

There is also a narration found in the mustadrak of al-Hākim as well as the sunan of Ibn Mājah in which the name, al-Qadīm is listed as one of Allāh’s names. These two narrations are not rigorously authenticated, but they nevertheless establish for us that the description al-Qadīm can be ascribed to Allāh the Most High.

We mention this because, some individuals have made a large fuss over this wording. Shaykh `Abdul `Azīz ibn Bāz  رَحِمَهُ ٱللَّٰهُ‎ said in his footnotes on the creed of Imām al-Tahāwī:

“The phrase Qadīm bilā ibtidā’ (‘eternal with no beginning’) did not occur among the Best Names of Allāh as pointed out by a number of scholars. It was first mentioned by the scholars of Kalām in an effort to prove Allāh’s existence before anything else. Let it be known that the Names of Allāh are of a divine origin. Only those names for which there is evidence in the Qur’ān and the authentic Sunnah can be used for Allāh. They cannot be introduced into the Islamic vocAbūlary simply at one’s whim, and this has been clearly understood by the Imāms of the pious predecessors. In fact, the word Qadīm does not even denote the meaning which the people of Kalām wished to express. In Arabic, it means something preceding another, though it is itself preceded by nothing, such as in the saying of Allāh: ‘Till she (the moon) returns like the old lower part of a date-stalk.’ (Ya Sin 36:39) Although the addition of bilā ibtidda’ makes the meaning crystal clear, it is not valid to be counted among the best Names of Allāh because there is no proof for it in the Book or the Sunnah. Instead, Allāh’s name al-Awwal (the First) expresses this idea better, as shown in His saying: : ‘He is the First and the Last.’ (Hadīd 57:3)”

However, upon closer examination, we find numerous errors in the above quoted words of Shaykh Ibn Bāz  رَحِمَهُ ٱللَّٰهُ‎.

2. His claims that this word was coined by the scholars of Kalām. This is incorrect. Many of the scholars of Hadīth used the term al-Qadīm, not to mention the primary source of salafīs-Shaykh Ahmad ibn Taymīyya  رَحِمَهُ ٱللَّٰهُ‎. In fact, Imām al-Bayhaqī narrated a consensus of the Ummah regarding the permisibility of using the word al-Qadīm.

3. His claim that those who use al-Qadīm, take it as a name for Allāh. This is a false claim. The scholars of creed have textually stated that al-Qadīm is used as a description and not a name-as mentioned by Imām al-Ghazālī  رَحِمَهُ ٱللَّٰهُ‎ in his explanation of Allāh’s beautiful names.

The sole intention of Shaykh Ibn Bāz  رَحِمَهُ ٱللَّٰهُ‎ in his footnote was to oppose the scholars of kalām – even if with falsehood. If that was not his intention, then why did he remain silent concerning Imām at-Tahawī’s passage when he used the word al-Dā’im (the everlasting eternal)?