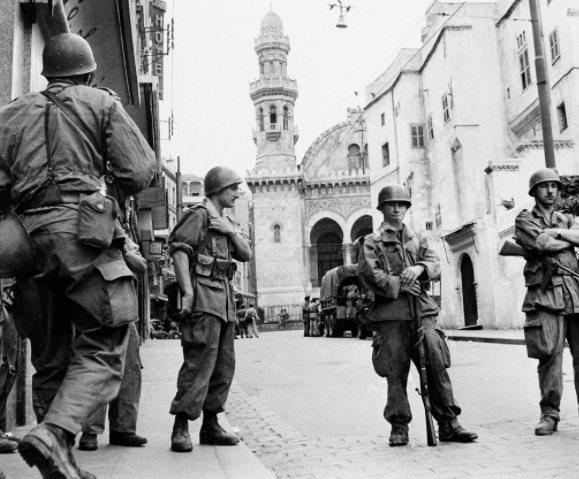 Above Picture: French troops in Algiers in 1956

Macron is not the first French ruler who wanted to ‘liberate Islam. This is an old French ‘secular’ tradition

France is in crisis.

Official and unofficial Christian French radical extremism, legitimising itself under the umbrella of what the French ostentatiously call laicité, continues to increase its attacks on French and non-French Muslims.

French Christian and so-called “secular” hatred of Muslims is part of everyday speech by the French government, the pundits, and the media.

In fact, the normalisation of hate speech against Muslims not only legitimises the institutionalised discrimination to which French Muslims are subjected, but also incites violence against them inside and outside France, including the shootings at the mosque of Brest and the targeting of its popular imam Rachid Eljay in June 2019 and the attack on the mosque of Bayonne in October 2019 that wounded four.

Outside France, the terrorist who committed the 2019 massacre at the Christchurch mosques in New Zealand, killing 51 Muslim worshippers and wounding 49, cited the murderous actions of the Islamophobic French thinker Renaud Camus as influencing his actions.

In October 2019, French President Emmanuel Macron (whose first name is the name which the angel Gabriel gave to Jesus in the Gospels, meaning “God is with us”) and his then Interior Minister Christophe Castaner (also named after Christ himself) connected terrorism in France to any signs of French Muslims’ faith and culture, including having a beard, praying five times a day, eating halal food, etc.

It is purely coincidental that the president and his interior minister are named after Jesus Christ, which should not implicate all those named after Jesus with having a crisis with “Islam”, but rather only some of them who express anti-Muslim “secular” hatred.

Last week, Macron declared that “Islam is a religion that is in crisis all over the world today, we are not just seeing this in our country”. He added that he is seeking to “liberate” Islam in France from foreign influences by improving oversight of mosque financing.

But Macron is not the first French ruler who wanted to “liberate” Islam.

This is an old French “secular” tradition. When Napoleon Bonaparte invaded Egypt and Palestine in 1798, his clever plan was to lie to the Egyptians by announcing that he and his army were “faithful Muslims” and that they came to liberate Muslims and Islam from the tyranny of the Mamluks.

His deception did not work and the Egyptians rose against him as did the Palestinians. He returned in defeat to France after his army committed untold atrocities in Egypt and Palestine. Napoleon and France’s crisis with Islam two centuries ago was that they were defeated in the Palestinian city of Acre. Three decades later, when France invaded Algeria, the French no longer needed to lie to Muslims to conquer them, rob them, and destroy their places of worship.

The official casus belli that King Charles X used to justify the invasion of Algeria in 1830 was France’s refusal to pay its debt for grain that Algerian merchants had supplied Napoleon’s French army during the Italian Campaign under the First Republic. In view of the fact that the Algerian merchants were from the Livorno Jewish banking families of Bacri and Busnac, the public debate at the time in France had an “antisemitic tenor”.

Ironically, this is the same King Charles who in 1825 forced the liberated slaves of Haiti, whose revolution overthrew French colonialism and slavery, to pay millions in indemnity for the property losses of their former white French masters who had enslaved them in exchange for France’s diplomatic recognition and lifting its punishing blockade of Haiti. 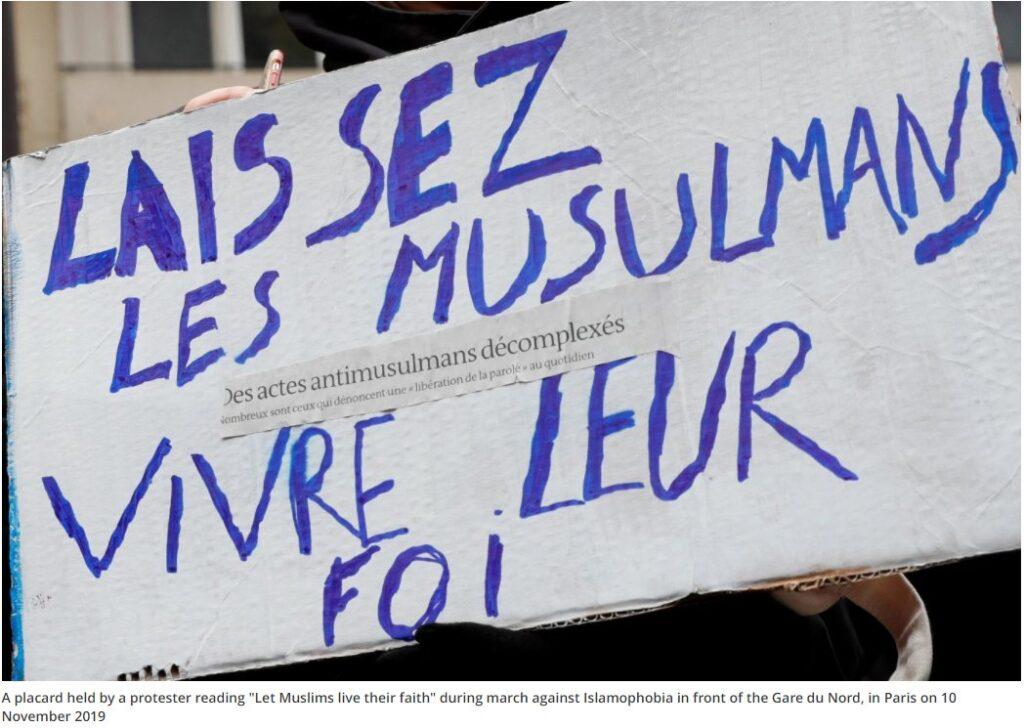 In 1827, Hussein Dey, ruler of Ottoman Algiers, demanded payment of the debt from the French consul, Pierre Deval, who insolently refused. Incensed by the consul’s affront, the Dey struck him with a fly-whisk (what the French refer to as the coup d’éventail incident) – and called him “a wicked, faithless, idol-worshipping rascal”.

The invasion was launched in mid-June 1830 and Algiers fell on 5 July. The financially struggling France robbed Algiers’ treasury clean, stealing upwards of 43 million Francs in gold and silver, aside from the sums that disappeared and those that were spent on the French occupation army. Perhaps poor West African countries that continue to be indebted to France today should prove how assimilated they are into Frenchness by invading France to rob its treasury.

The immediate goals of the invasion, as Charles enumerated them to the French national assembly on 2 March, were to avenge the French for the Algerian insult, “end piracy and reclaim Algeria for Christianity”.

In line with France’s Christian commitments, the conquering French army took over mosques and converted them into churches and cathedrals at gunpoint, including the largest Ottoman Ketchaoua mosque in Algiers, built in 1612, which was converted into the Cathedral of St Philippe in December 1832.

That same year the French wiped out the entire tribe of the Ouffias, sparing no woman or child, and seizing all their possessions.

Not unlike contemporary white French Christian supremacist intellectuals’ utter hatred and racism towards Muslims, in the early 1840s, France’s celebrated thinker Alexis de Toqueville declared in this regard that “it is possible and necessary that there be two sets of laws in Africa, because we are faced with two clearly separate societies. When one is dealing with Europeans [colonial-settlers in Africa], absolutely nothing prevents us from treating them as if they were alone; the laws enacted for them must be applied exclusively to them.”

He objected to the faint of heart who opposed French barbarism and their use of blitzkriegs (which they called “razzias”) against the Algerian population. “I have often heard men whom I respect, but with whom I do not agree, find it wrong that we burn harvests, that we empty silos, and finally that we seize unarmed men, women, and children. These, in my view, are regrettable necessities, but ones to which any people who want to wage war on the Arabs are obliged to submit. And, if I should speak my mind, these acts revolt me no more nor even as much as several others that the law of war obviously authorises and which take place in all the wars of Europe.”

In 1871, Algerian Muslims revolted again against French rule, with 150,000 people joining the forces of a local Kabyle leader, Al-Muqrani.

The French genocidal machine responded by killing hundreds of thousands, which, combined with the French-caused famine deaths in the late 1860s, resulted in the death of one million Algerians (about a third of the population). The French razed dozens of towns and villages to the ground while eliminating the entire elite of Algerian society. But even that did not resolve France’s “crisis” with Islam. 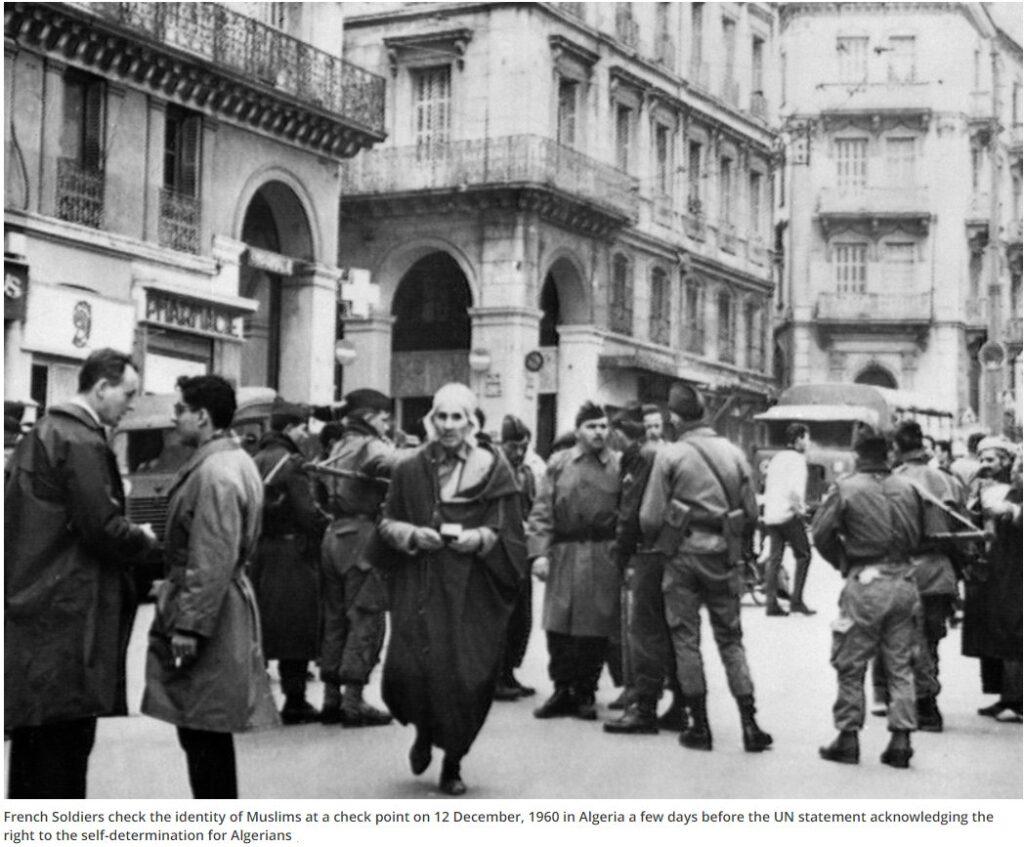 In 1901, the French concern about their “crisis” with Islam increased. This was especially so as France, which “is and will become increasingly and without a doubt a great Muslim power”, given its acquisition of new colonies with large Muslim populations, needed to know what Islam would be like in the 20th century.

This became such a grave concern that a colonial “quest” for knowledge was issued. The editor of the important French colonial journal Questions diplomatiques et coloniales, Edmond Fazy, set out to investigate the question of “the Future of Islam” by the year 2000.

Not unlike many Islamophobic French Christians today, Fazy worried about the increasing and underreported number of Muslims worldwide (he cited the figure of 300 million, constituting a fifth of the world’s population) and the propagation of their “simple” religion to Africa.

Many of the contributors to his journal saw fit to manipulate Islamic theology and transform Muslim ulamas to produce not only a modern Islam that European modernity would tolerate, but also one that, they hoped, would weaken the Ottoman Empire.

The most practical advice, however, came from the French school of Arabists, staffed by the French colonial settlers (pieds noirs) in North Africa. One of them, Edmond Doutte, of the ecole algerienne, a specialist in religion and Islam, spoke of his encounter with Muslim fanaticism and intolerance.

Traditionally educated Muslims seem to have “moved away from us” in contrast with the native workers, who fraternise with the colons and learn “our habits”. Rather than repress “the exaggerated religious manifestations” of extant Islam, the task before Europeans was more productive.

“We could, on the contrary, favour the birth of a new Islam more inclined towards compromise and tolerance of Europe; to encourage the young generation of ulama who are working in that direction, and to increase the number of mosques, madrasas, and Muslim universities, ensuring that we staff them with adherents of the new theories.” 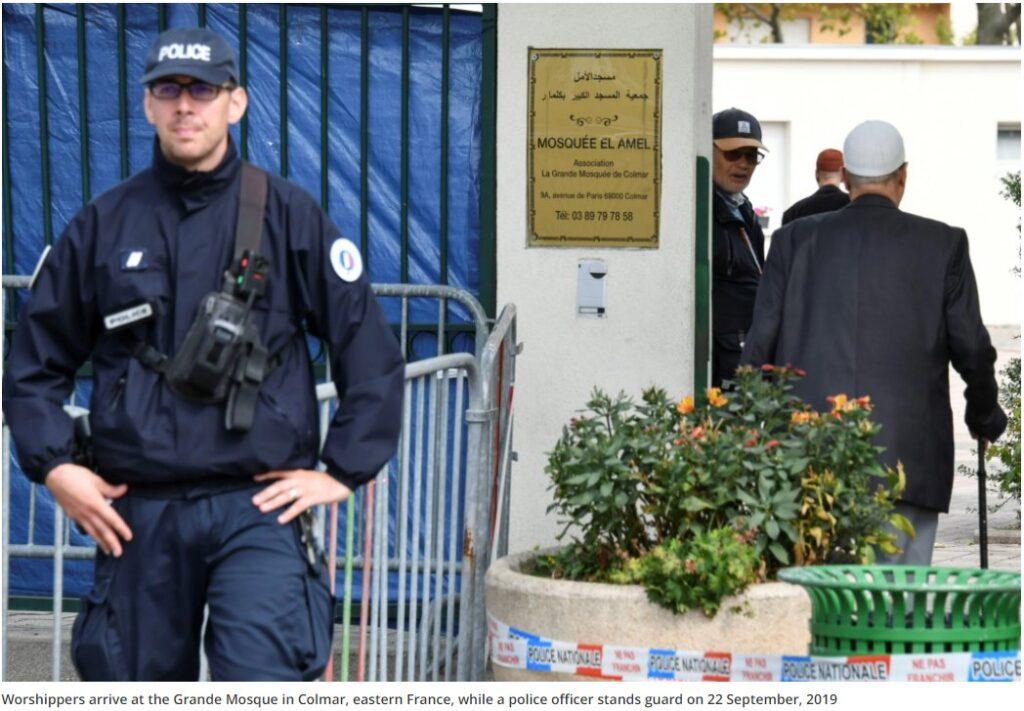 Doutte’s comments ring so familiar because they could easily be uttered by any contemporary French – or other western – politician or pundit today.

As for M William Marcais, the director of the Tlemcen madrasa founded by the French to train Algerian Muslim judges on “rationalist” grounds, he was partial towards the “new” and “modern” Islam that the French were fashioning and in which he was a participant, an Islam that “was closely tied to France’s destiny.”

The project of transforming Islam into something European Christianity and French laicite can tolerate continues afoot in 2020, but with unsatisfactory results as far as Macron is concerned, especially as France’s funding of jihadist groups in Syria has not so far brought about the French-sought after Islam.

The ongoing institutionalised discrimination by the French state against its Muslim citizens shows no signs of abatement under Macron. France continues to be submerged in a dominant discourse of chauvinism and hate today that is not dissimilar to the one that always dominated French culture even before the French Revolution.

It is true that the widespread white Christian supremacist and fascist culture of hate across Europe and the United States today, reminiscent of the European culture of hate in the 1930s, is not exclusive to France, but the French (not unlike the Israelis) excel at expressing it with minimal euphemisms.

The crisis that France continues to face with Muslims is the crisis of French chauvinism, and the refusal of the white supremacist Christian and laic French to recognise that their country is a third-rate neocolonial power with a dominant retrograde culture that insists on holding on to underserved past glories, when they need to repent their genocidal sins that extend from the Caribbean to South East Asia, to Africa, and that killed millions of people since the late 18th century.

What the French need to do is to pay back the debts they owe to all those whom they robbed and killed around the world since then. Only that will end France’s crisis with “Islam” and with itself.

Joseph Massad
Joseph Massad is Professor of Modern Arab Politics and Intellectual History at Columbia University in New York. He is the author of many books and academic and journalistic articles. His books include Colonial Effects: The Making of National Identity in Jordan, Desiring Arabs, The Persistence of the Palestinian Question: Essays on Zionism and the Palestinians, and most recently Islam in Liberalism. His books and articles have been translated to a dozen languages.
source : middleeasteye.net
Share
Facebook Twitter Pinterest Linkedin