No charge, but no release. Yesterday the anger of hunger-striking detainees boiled over in clashes with their jailers 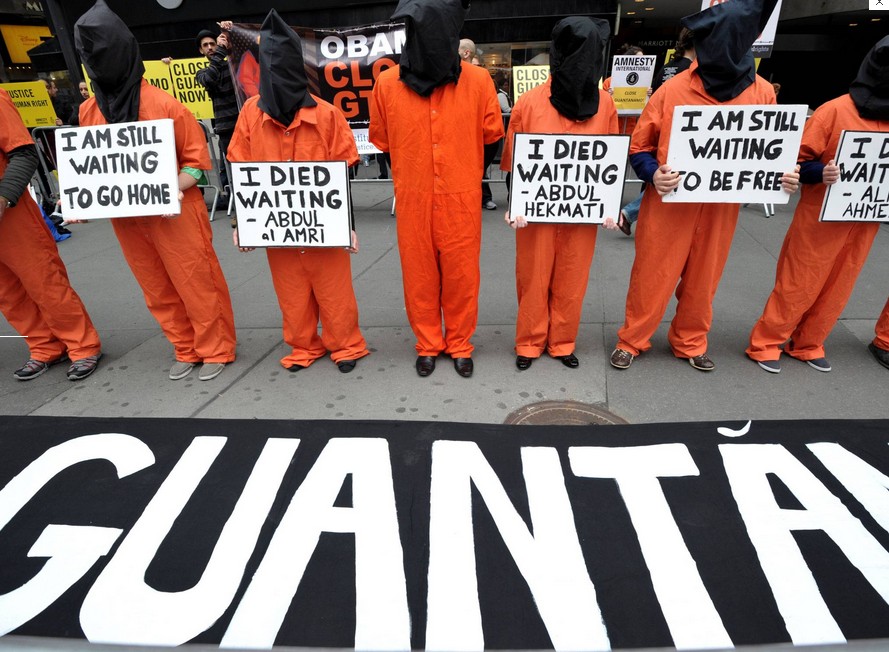 For long periods we forget it, even though it is a human rights disgrace surely unequalled in recent American history. But now, 11 years after it opened, the prison for suspected terrorists at Guantanamo Bay is demanding our attention once again, thanks to the largest hunger strike by detainees in its infamous history. Al-Qa’ida has been decimated; America’s war in Iraq is over and the one in Afghanistan soon will be. But the scandal of Guantanamo endures.

Today, 166 inmates remain. Three have been convicted, while a further 30 will face trial. Fifty or so are in a legal no-man’s-land, deemed by the authorities too dangerous to release but against whom there is not enough evidence to prosecute. And then there are 86 who have been cleared for release, but who instead rot in a hell from which there is no escape. No wonder yesterday more than 160 of them were involved in clashes with guards that led to what the US said were “less than lethal” rounds being fired.

In 2009, Barack Obama entered office vowing to close Guantanamo within a year. Perhaps he should have listened more closely to his predecessor. George W Bush, too, wanted to shut Guantanamo; even he came to understand it was perhaps the most powerful single recruiting agent for global terrorism. But, he warned presciently, the devil was in the detail – or, more exactly, in Congress.

Mr Obama’s planned to transfer most inmates to a high-security prison in Illinois, but that idea was blocked. Then Congress made things harder still, first scotching a plan to try Khalid Sheikh Mohammed, the organiser of 9/11 and Guantanamo’s best-known prisoner, in a civil court in the US, and effectively banning the use of public money to transfer Guantanamo detainees to the US or abroad.

Even so, Dan Fried, the special envoy in charge of closing the prison, managed to resettle 40 detainees during Obama’s first term. But at the end of January, Mr Fried was reassigned and not replaced, his duties incorporated into the State Department’s existing legal office. For the 86 inmates eligible for release it was the last straw. Within a week the hunger strikes started.

Detainees tell their lawyers that up to 130 now are taking part. The Pentagon claims they number no more than 40, of whom a dozen are being force-fed. Given the lack of independent access to Guantanamo, the exact number is impossible to establish.

Like others before it, the protest may have been sparked by complaints that guards were abusing detainees’ copies of the Koran. But even the Pentagon admits the real reason was despair. Inmates were “devastated” by the signal that the administration no longer believed that closing the prison was a realistic priority, Marine General John Kelly told Congress, so “they want to turn the heat up, get it back in the media”. And who can blame them?

By all accounts, the atmosphere within Guantanamo has never been as bleak. The Soviet Union had gulags, “but no Soviet gulag ever had 52 per cent of its prisoners cleared for release,” says Clive Stafford Smith, director of the legal charity Reprieve, who has been representing Guantanamo detainees almost since the place opened in January 2002.

One of his clients is the Saudi-born British resident Shaker Aamer, captured in Afghanistan in November 2001 and brought to Guantanamo in February 2002. He has been cleared not once but twice, in 2007 and then by the Obama administration in 2009. But the US won’t let him go, not even back to its trusty ally Britain, where Aamer’s family live. Fluent in English, Mr Aamer is regarded as a “leader” among the detainees. Many suspect that the Americans will never free him, because he knows so much, and would speak out.

Today, even George Orwell would have been pressed to conceive the plight of the 86: cleared for release, but denied freedom, using a hunger strike as their last weapon, only to be kept alive by the very people who will not let them go. On Thursday, Mr Aamer gave the most recent account of events at Guantanamo to Mr Stafford Smith in an hour-long phone conversation, described by his lawyer in a sworn affidavit.

Mr Aamer is participating in the hunger strike, although he is not yet being force-fed. But other harassments abound. He is in Guantanamo’s Camp Five, where “non-compliant” prisoners are held. His health is poor and deteriorating. There is noise throughout the night. It is getting harder to speak to lawyers. Then there are the FCEs, or “forcible cell extractions”, to use the euphemism for being picked up and shackled by a team of six guards who burst into your cell. “They FCE me just to give me water,” Mr Aamer recounted.

Each day, he says, there are 10 to 15 “code yellow” incidents, when a prisoner on hunger strike collapses or passes out. Even contact with lawyers is a mixed blessing. “Each phone call [from a lawyer] is a curse. They hear what I am saying to you and use that against me to make things worse,” he told Mr Stafford Smith. The situation, in short, is grimmer even than during what Mr Aamer calls “Miller time”. For ordinary residents of the US, the phrase advertises a well-known brand of beer. But in the extra-territorial Hades of Guantanamo, the reference is to General Geoffrey Miller, the prison’s second commandant before he was sent to Iraq in August 2003 to advise on “more productive” interrogations of prisoners, that is, to “Gitmo-ise” Iraq.

The hunger strike is succeeding in returning the spotlight to Guantanamo. On the day Mr Stafford Smith talked to Mr Aamer, Chuck Hagel, the Defence Secretary, told Congress he favoured closing the prison, while leading human rights groups wrote to Mr Obama demanding again that Guantanamo be shut and its inmates either released or tried in civilian court. But it seems optimism bordering on insanity to believe these entreaties will succeed where every other has failed.

Mr Aamer, by all accounts, is a proud man not given to self-pity. But by the end of the phone call, Mr Stafford Smith declared, his client seemed to be crying. “They are killing us, so it is hard to keep calm. It’s hard to understand what they are doing, or why. No matter how much I show you I am tough, in reality I am dying inside. If you want us to die, leave us alone. But they do not want us to die, and they do not want us to live like a human being. What is worse than that?” What indeed?

International medical groups have denounced the forced-feeding of Guantanamo Bay prisoners, which invariably involves strapping detainees into restraint chairs (marketed as a “padded cell on wheels” by their manufacturer), pushing a tube up their nose and down their throat, and pumping liquids into their stomach. Although it is considered a method of torture by the United Nations Human Rights Commission, the US military insists forced-feeding is a form of “medical intervention” and that the practice is less aggressive than it was.

Forced-feeding first received widespread public attention in the Edwardian era, when it was used against hunger-striking suffragettes who were held down as the instruments were painfully inserted into their bodies, an experience that has been likened to rape. This technique was also performed on hunger-striking Irish Republicans: in 1917, Thomas Ashe died as a result of complications from the procedure.

Forced-feeding in prisons has been outlawed since 1975 when the World Medical Association issued the Declaration of Tokyo, guidelines for physicians concerning torture and other cruel or degrading treatment in relation to detention. The declaration stipulates that: “Where a prisoner refuses nourishment and is considered by the physician as capable of forming an unimpaired and rational judgement concerning the consequences of such a voluntary refusal of nourishment, he or she shall not be fed artificially.”