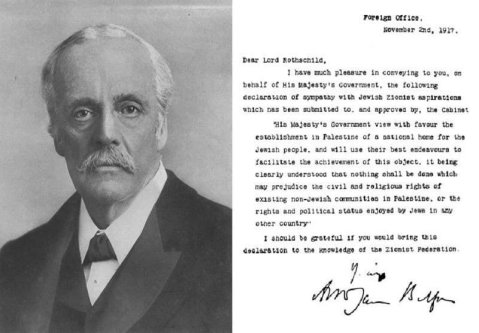 In a remarkable admission, the Guardian has ranked its support for the Balfour Declaration promising a “homeland” for the Jewish people as one of its “worst errors of judgment over 200 years.” The British newspaper made its startling announcement on Friday.

“Whatever else can be said, Israel today is not the country the Guardian foresaw or would have wanted,” it said. “When Arthur Balfour, then Britain’s foreign secretary, promised 104 years ago to help establish a national home for the Jewish people in Palestine, his words changed the world.” The controversial Balfour Declaration was made when Jews were no more than five per cent of the population in Palestine.

Noting that the most noticeable mistakes stemmed from the editorial pages, the Guardian appeared to take responsibility for what it appears to suggest is the failed project of creating a “Jewish homeland” in Palestine. “The Guardian of 1917 supported, celebrated and could even be said to have helped facilitate the Balfour declaration,” it noted. The editor at the time, CP Scott, was a supporter of Zionism which may have “blinded him to Palestinian rights”.

In 1917 Scott wrote a piece displaying the kind of racism that was typical of western writers and politicians at the time who supported the Zionist project. On the day that the Balfour Declaration was announced, Scott dismissed any other claim to the Holy Land with the racist statement that, “The existing Arab population of Palestine is small and at a low stage of civilisation.” Muslim and Christian Palestinians at the time made up more than 95 per cent of the population.

This admission by the Guardian comes as Israel’s status as a deeply racist country that practices a system of apartheid has become impossible to dispute. Last month, the pre-eminent human rights organisation Human Rights Watch (HRW), joined a host of other prominent groups to declare that Israel is committing the crimes of apartheid and persecution.

Prior to HRW’s report, Israeli human rights group B’Tselem branded Israel as an “apartheid” state that “promotes and perpetuates Jewish supremacy between the Mediterranean Sea and the Jordan River.” Echoing the UN’s 2017 report which concluded that Israel was practising apartheid, B’Tselem dismissed the popular misconception that it is a democracy within the Green (1949 Armistice) Line.

Prestigious Guardian apparently considers that one of its worst errors of judgement in the past two centuries was its support for the then Foreign Minister Arthur Balfour’s 1917 pledge to establish a “national home for the Jewish people” in Palestine. According to the Guardian, it “supported, celebrated and could even be said to have helped facilitate the Balfour declaration,” relying on misleading and biased information provided by its Zionist editor, C.P. Scott.

Zionism had tampered with the European conscience, which Orientalism had prepared to accept the “Jewish home” narrative since the beginning of the twentieth century and even before. The carefully studied propaganda of the Zionist movement blinded Scott to the rights of the Palestinian people.

The newspaper’s startling admission was made during the celebration of its bicentennial, and in the context of examining the worst professional mistakes, it committed during its coverage over 200 years.

Scott was responsible for “information” such as this: “The existing Arab population of Palestine is small and at a low stage of civilisation.” He reformulated the Zionist propaganda and broadcast it through one of the most influential newspapers in the world at the time. Looking back, he looks more like a trained spy than a journalist.

The Guardian was at the mercy of a fanatical Zionist without insight, accountability or any attempt to scrutinise or fact-check his “information”. This “error of judgement” was a betrayal of the profession and of the facts; it goes beyond the editor and his bias in favour of the Zionist movement and its brutal propaganda based on the idea that there was no nation in Palestine. Balfour’s promise to the Zionist movement was seen by Europeans as a humanitarian gesture by a “noble white Englishman” towards a group of hopeless natives.

This was all before the Holocaust, the concentration camps and the gas chambers which would garner public support for the narrative pushing the “need” for the “national home” which turned into a nation-state called Israel.

The painful truth is that the Guardian’s “error” contributed to the creation of a formal infrastructure to implement the seizure of Palestine and the displacement of its people.

Although in itself the newspaper’s admission is a sign of a shift in European and American public opinion regarding the Palestinian-Zionist issue, this has not always been reflected in its editorial policy. The Guardian still uses very guarded language which often overlooks the truth of the matter. This is despite the fact that details are now more accessible than ever before thanks to the latest technology; who needs a C. P. Scott to provide “information” these days?

While the admission is appreciated, it would be more effective if it had been accompanied by a detailed apology. It would also be useful to publish a timeline of articles from that period to the present day, illustrating how support for a “national home for the Jewish people” turned into brutal attacks on the indigenous people of Palestine by fanatical, neo-fascist settlers and the Israeli police and soldiers in Sheikh Jarrah and Al-Aqsa Mosque. The damage caused by such “errors of judgement” all those years ago is behind the ongoing tragedy of the Palestinian people and the violation of their legitimate rights.

The bottom line is that the Palestinians have never been a minority in their homeland, and have a long and thriving culture and civilisation which commands respect. The sooner that Israel and its supporters in the West accept that, newspapers like the Guardian included, the better it will be for everyone.