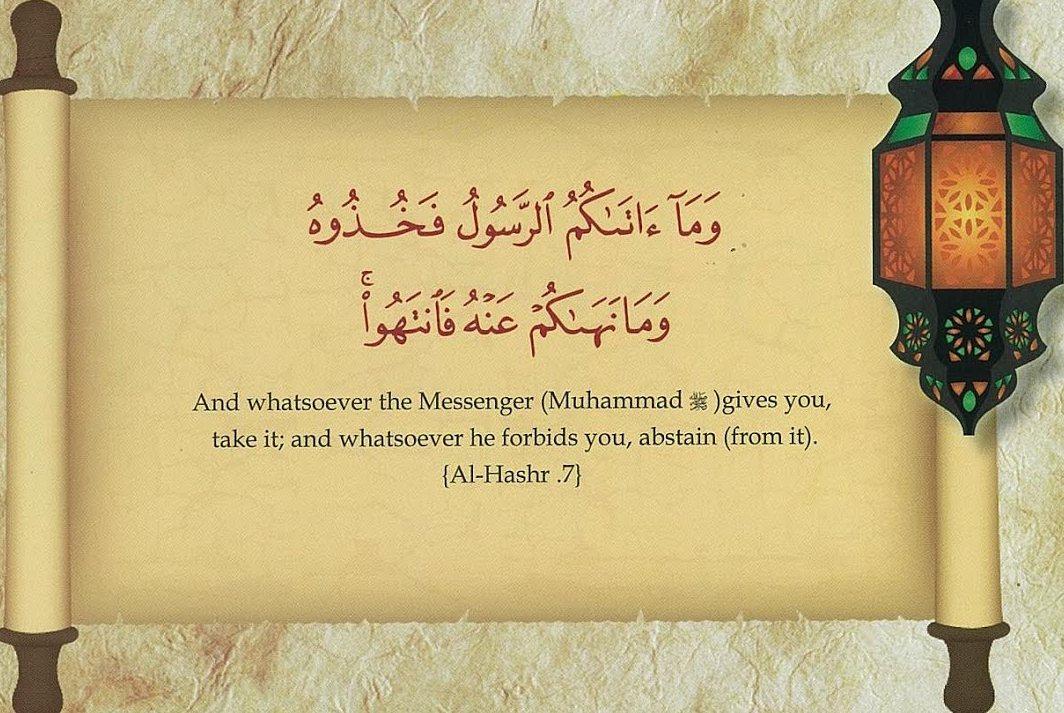 The Word ‘Hadith’ and its Meaning

Whenever used as an adjective it means new. It has been used in the Qur’an 23 times. Here are a few examples:

Usage of the Word hadith in the Qur’an for:

a) Religious communication, message or the Qur’an:

“Then leave Me alone with such as reject this hadith”  (meaning the Qur’an – Ibn Kathlr, Tafslr, vii, 91)

b) Story of a secular or general nature:

“And whenever you meet such as indulge in (blasphemous) talk about Our Message, turn thy back upon them until they begin hadith (conversation) of some other things”

“Has the hadith (story) of Musa reached thee?”

“When the Prophet confined a hadith (a secret) to one of his wives.”

We may conclude that this word has been used in the Qur’an in, the sense of story or communication or message, be it religious or secular, from a remote past or of the present time.

Usage of the Word ‘Hadith’ in the Sayings of the Prophet

The word was used in the same sense by the Prophet, as it has been used in the Qur’an. Here are a few examples,

“The best hadith is the book of Allah”

And the Prophet says:

Allah illumines a man who hears hadith from me, preserves it carefully and passes it on to others . .

b) Secular or general conversation or tale:

“One who tries to eavesdrop on the hadith (conversation) of the people when they dislike his doing so and want to keep away from him, in the Hereafter hot copper would be poured in his ear”

“You may transmit hadith from Banu Isra’il”

“If someone tells a hadith (secret) then goes his way, his words become a trust”

It is clear now, in the light of the above-mentioned examples that the word hadlth has in its meaning the sense of story or communication.

In the early days of Islam the stories and communications of the Prophet (hadlth) dominated all other kinds of communications, so this word began to be used almost exclusively for the narration about or from the Prophet (See Zafar Ansari, Islamic juristic terminology, p. 5).

The Term Hadtth and its Meaning According to Muhaddithin and Jurists

Thus hadith literature means the literature which consists of the narrations of the life of the Prophet and the things approved by him. However, the term was used sometimes in much broader meaning in the sense to cover the narrations about the Companions and Successors as well (Jurjani, Risdla, 1. for detailed reference see, Al-Azami, Studies, 302).

Sometimes some other words were also used in the same sense, such as khabar and athar. Most of the scholars used these three terms: hadith, khabar and athar as synonymous. However, some scholars mostly of Khurasan region used to differentiate between khabar and athar. They used the khabar in the sense of hadith, and the term athar restricted to the sayings and decisions of the Companions. However, there is another key word, though a little different from the term hadith in the meaning, yet used mostly as synonymous, that is the term sunna. Due to the importance of this term we shall discuss it in some detail.

The Word Sunna, its Meaning and Different Usage

Sunna, according to Arabic lexicographers means: ‘a way, course, rule, mode, or manner, of acting or conduct of life’ (Lane, iv 1438. ).

In the Qur’an, the word sunna and its plural sunan have been used six- teen times. In all of these cases it is used in sense of established course of rule, mode of life, and line of conduct (See Penrice, Dictionery of the Koran, p. 73.)

In Arabic literature, especially in the early Hadith-Fiqh books it has been used in different meanings, such as:

Established non-compulsory religious practice without its being fard or wajib (compulsory).

That which is proved by means of sunna, one of the four Sources of Law (Thanawi, Kashshaf, 703ff)

Model behaviour of the Prophet.

Sometimes the Arabic definite article (AL) was affixed to the word sunna to denote the sunna of the Prophet, while the general use of the word continued, though decreasing day by day. At the end of the second century it began to be used almost exclusively in the legal books for the norms set by the Prophet or norms deduced from the Prophet’s norm.

As sunna means the mode of life, and the sunna of the Prophet means the mode of the life of the Prophet, and hadith means the narration of the life of the Prophet, these two terms were used almost interchangeably, though there is a slight difference between them. For a hadith may not contain any sunna or a single hadith may contain more than one sunna. However, to avoid confusion, we shall U9e them as -interchangeable as they have been used by early scholars as well as by the present ones.

If hadith literature stands for the narration concerning the Prophet and sometimes his Companions, then what do the sciences of hadith stand for? To err is human. In reporting, narrating and recording the life and conduct of the Prophet some mistakes were committed even by the most sincere scholars, not to speak of some unscrupulous men who deliberately fabricated materials pretending to be concerned with the Prophet. Therefore, the science of hadith was developed, to evaluate every single statement ascribed to the Prophet.

Why was this painstaking task done? There have been many great rulers and leaders but nothing of this sort was developed to differentiate between correct and incorrect statements attributed to them. The answer to this question is the unique position of the sunna of the Prophet, which de- manded this care.

The Authority of the Prophet

The Prophet Muhammad and His Position According to the Qur’an

a) Expounder of the Qur’an

The Prophet is the expounder of the Qur’an appointed by Allah. Al-mighty Allah says:

“We have revealed unto thee the Remembrance, (the Qur’an,) that you may explain to mankind that which has been revealed for them.”  (The Qur’an, Nahl, 44.)

The Qur’an commands—if we may take salat (prayer) as an example—the establishment of salat (prayer) in numerous verses, but does not prescribe the details for the method of praying. The Prophet’s task was to demonstrate the forms of prayer practically as well as orally.

Almighty Allah, speaking about the legislative power of the Prophet Says:

“He will make lawful for them all good things and prohibit for them only the foul, and will relieve them of their burden and the fetters which they used to wear” (Nahl, 157)

In this verse we find that the legislative authority is bestowed upon the Prophet. So he acts as the society’s law giver. The Prophet initiated certain things which were later mentioned by the Qur’an as the standardized practices of the community, e.g. the practice of Adhan to which the Qur’an refers only as the ‘existing practice’ (al-Jum’a, 9). This instance proves the legislative authority of the Prophet and that his deeds were sanctioned by Allah.

The Qur’an refers to the life pattern of the Prophet.

“A noble model you have in Allah’s Apostle, for all whose hope is in Allah, and in the Final Day, and who often remember Allah.” (al-Ahzab, 21.)

If we consider the Prophet as the model for the community, then Muslims have to follow his example in every way, especially as they have been specifically commanded to do so by Allah. These three essentials combined in the person of the Prophet led to the inevitable conclusion that Muslim Society must follow the Prophet in every walk of life. Almighty Allah did not leave the question open to debate. He explicitly ordered total obedience to the Prophet,

d) Total obedience to the Prophet

“We sent no messenger save that he should be obeyed by Allah’s leave.” (An-Nisa? 64.)

“Say, ‘Obey Allah, and the Messenger.’ But if they turn their backs, Allah loves not the unbelievers” (al-‘Imran, 32)

“Obey Allah and the Messenger haply so you will find mercy” (al-‘Imran, 132)

“O believers, obey Allah, and obey the Messenger and those in authority among you. If you quarrel on anything, refer it to Allah and the Messenger, if you believe in Allah and the Last Day; that is better, and fairer in the issue” (al-Nisa 59)

There are so many references in the al-Qur’an that the question does not really need any reference on this subject.

“But no, by thy Lord! they will not believe till they make thee the judge regarding disagreement between them and find in themselves no resistance against the verdict, but accept in full submission.” (al-Nisa 65.)

Before concluding this discussion, it is necessary to quote one more verse from the Qur’an. Allah says:

This verse was sent down in the context of the booty of war but it applies to all the cases as the Prophet explained. See Hanabal i, 415. Ibn Kathlr, Tafsir, vi, 604. Therefore it would be erroneous to confine it to the case of booty only. This is the general trend of the Qur’an, a verse came for a certain occasion but it has general application.

These are some of the many Qur’anic verses which state the authority of the Prophet and emphasize the fact that his whole life, decisions, judgements and commands have binding authority and ought to be followed in all spheres of life by Muslim individuals and communities as well as by Muslim States.

It is obvious that this authority of the Prophet does not rest on acceptance by the community or on the opinion of certain lawyers or scholars or the founders of the law schools. This point has been made clear by the Qur’an. For this reason, the Muslim community accepted the authority of the Prophet from the very day the mission of the Prophet began and has accepted all his verbal commands, his deeds, his tacit approval as the way of life, a binding factor and a model which ought to be followed.

Sunna of the Prophet

As I have mentioned earlier, the term ‘sunna’ as such is not restricted ‘to the sunna of the Prophet (For detailed study, see, A’zami, On Schacht’s Origins of Muhammadan Jurisprudence.)

Therefore we find this term sometimes used for others than the Prophet as well, which resulted in some misunderstanding by modern scholars. It is claimed by some modern scholars that Shafi’i was the first to define sunna as the model behavior of the Prophet. The problem would not have arisen if they had realized that the concept of sunna predated the definition of that term.

The powers of legislation, for example, are determined by the constitutions of modern states. When constitutions endorse the legislative powers and the range of their legislation, nobody can challenge them or claim rightfully that he is not to be bound by them. Thus—according to Islamic concepts—it is not for the lawyers but for Almighty Allah who is the LawGiver to determine the legislative authority if there is any.

The Qur’an never says that the source of law is sunna so that the early lawyers differed in its definition. The Qur’an, however, speaks time after time of obedience to the Messenger of Allah, which is obligatory and mentions his example which ought to be followed. Therefore, even if one agrees that the early scholars used this word or term in a broad sense, it should not create any perplexity because the source of law is not this particular ‘word’ or ‘term’ but the concept which derives its authority directly from the Qur’an.

When we come to this concept, we find it is clearly endorsed by the Qur’an, as we have seen earlier, and explicitly accepted by early lawyers. Hence we may conclude that the sunna of the Prophet is a must for Muslims, be they individuals, communities or states.

The ahadith of the Prophet are repositories for the sunna of the Prophet, and therefore he must have made arrangements for its diffusion in the Muslim community. We shall discuss this point in the next chapter.