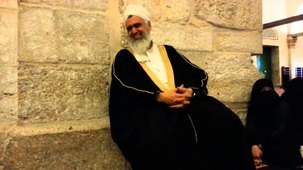 “Deen has spread throughout the world through Dawah and Tabligh. Because of it, we are Muslims today. Deen will prevail till Tabligh prevails and will go away if Tabligh is stopped. That is why we have to participate in the effort of Tabligh.”

He said these in front of a huge audience at the Naya Sharak Masjid of the city (Sylhet) after Fajr salah (Dec 2012).

He mentioned that he himself came to Nizamuddin, New Delhi, India in 1998 and spent 4 months in the effort of Dawah.

“I have come to Tongi Ijtema (Bangladesh) and have spent time in Pakistan”, he added.

“You may ask what have I got (in this) being the Imam of Masjid al Aqsa. I have obtained the highest degree in Arabic, yet, I would say that my knowledge has increased, my Amal [Actually practicing upon the commands of Allah] has increased, my character has improved through chilla.”

He said to the audience,

“I am not telling you to go for 4 months at this very moment, rather I would advise you to join the effort of Dawah that goes on at every Masjid: The Gusht, Mashwara and Ta’lim”. Your heart will soften, the light of Iman will enter (into your heart), your fate will change(inshaAllah).”

“It is Allah’s promise that the infidels shall not be able to extinguish the light of Islam, no matter how hard they try. No matter how staunchly they oppose the Prophet (Peace be upon

him), His name and example will prevail throughout the world. Deen will prevail through the Islamic schools like Jamia Madinatul Uloom Darus Salam. Otherwise, ignorance will spread. That is why it is our duty to try so that such institutions exist”.

He said this as the chief guest at a huge ‘Dua Mahfil’ [Prayer congregation] on Saturday at the Jamia Madinatul Ulum Darus Salam, Khasdobir, Bangladesh.