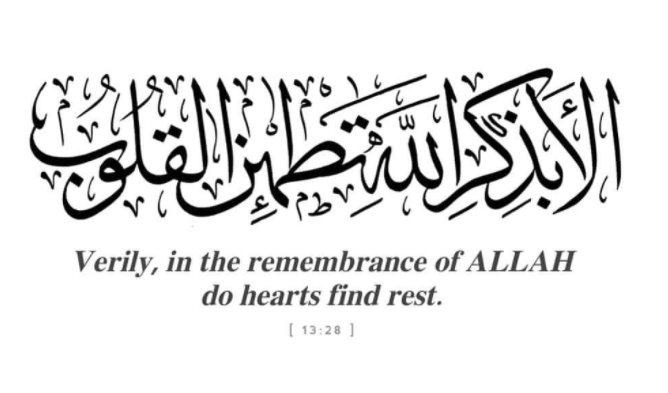 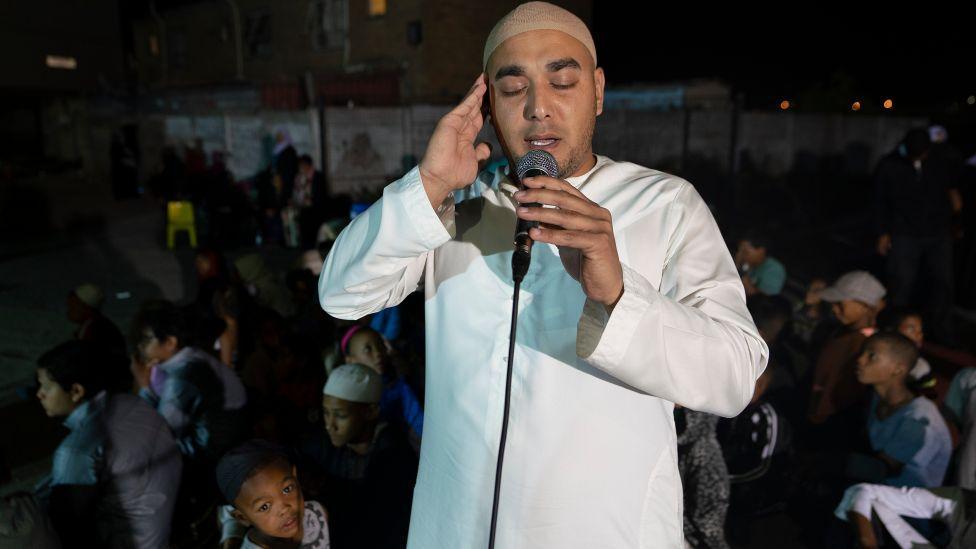 A team of Islamic scholars in South Africa has been on a mission for the past three years to bring peace to Manenberg and other areas of Cape Town with gang and drug problems.

Photographer Shiraaz Mohamed accompanied them on one of their weekly visits: 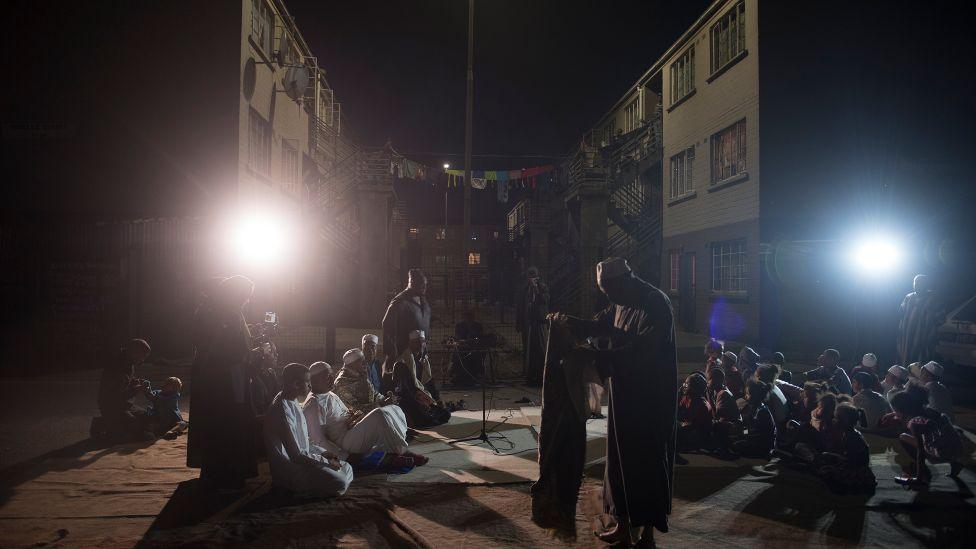 Most Thursday evenings the scholars go to Cape Town’s ganglands for an open-air form of devotion known as “dhikr”.

These sessions involve a rhythmic repetition of the name of God and his attributes. 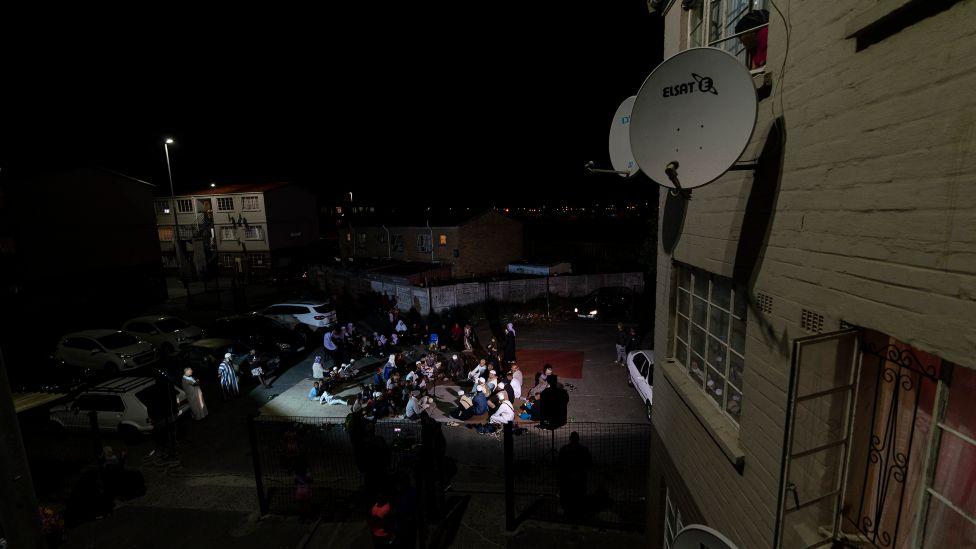 Over the last three years there has never been a gang fight during the hour-and-a-half of worship, the organisers say.

Usually between 100 and 400 people attend. There was one worship dedicated to fighting gender-based violence – a huge problem in South Africa – which had nearly 2,000 people in attendance.

“It is not about the numbers. The overwhelming part is that despite all conditions we are able to have the dhikr running consistently for the past three years,” organiser Sheikh Mohamad Saalieg Isaacs says. 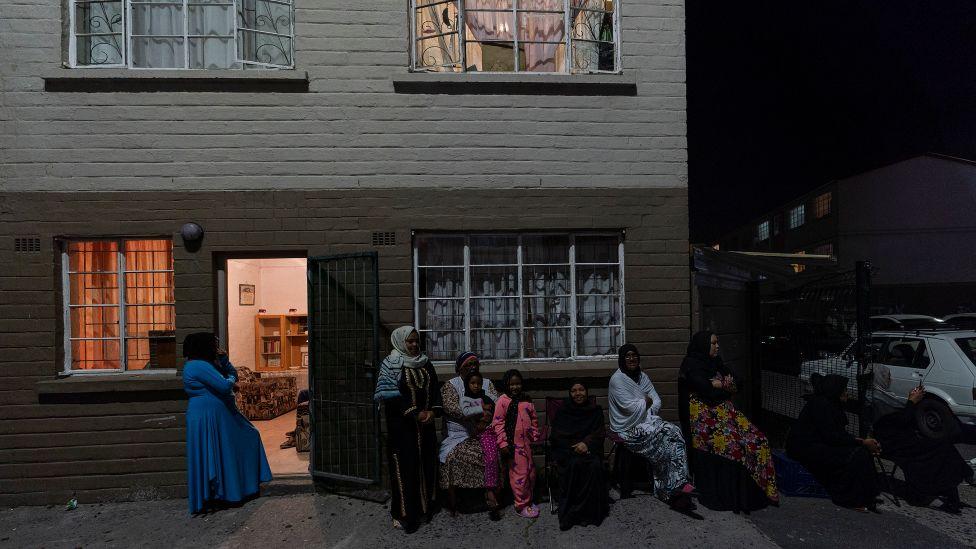 Manenberg is a township that was created by the apartheid government in the 1960s for low-income coloured people, which is the official term for people of mixed racial origin in the country.

The white-minority regime at the time forcefully segregated communities by race, allowing white people to live in affluent areas of cities.

The township has an estimated population in excess of 52,000 people, who are mainly Christian, and unemployment, poverty, crime and gang violence is rife. 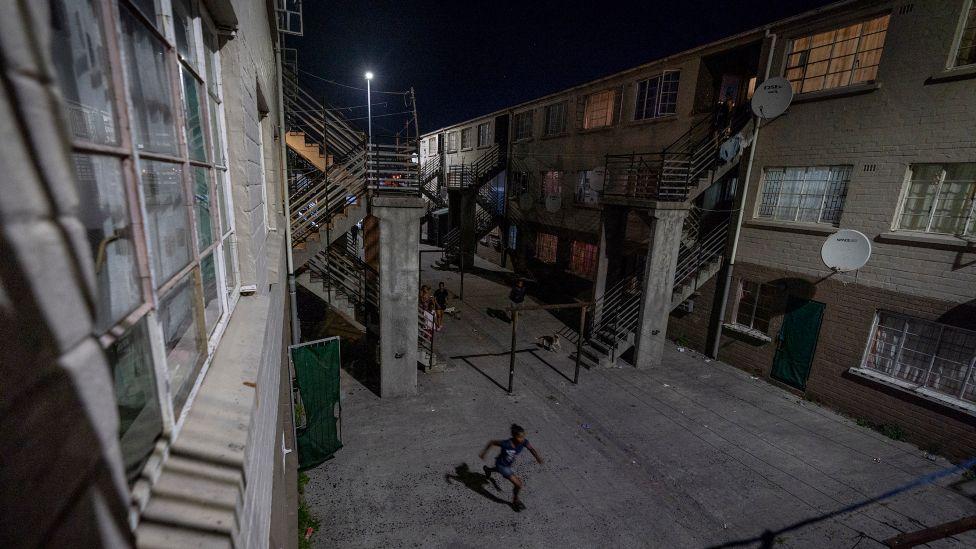 There is currently a ceasefire in Manenberg between the gangs, which followed an intense period of gang fights – though a few hours before this dhikr took place there was a shooting at these flats, and over the weekend four men died in an apparent gangland shooting in nearby Mitchells Plain.

The dhikr organisers feel that there will never be a real end to the violence as the government has made no proper attempt to deal with it.

For Sheikh Isaacs, dialogue involving the community’s different religious leaders would be a good start: “Crime has no boundaries and does not distinguish between religion.”

He also feels the authorities should deal with overcrowding – and help people move to other areas instead of building more flats in the township, and increase the visibility of the security forces. 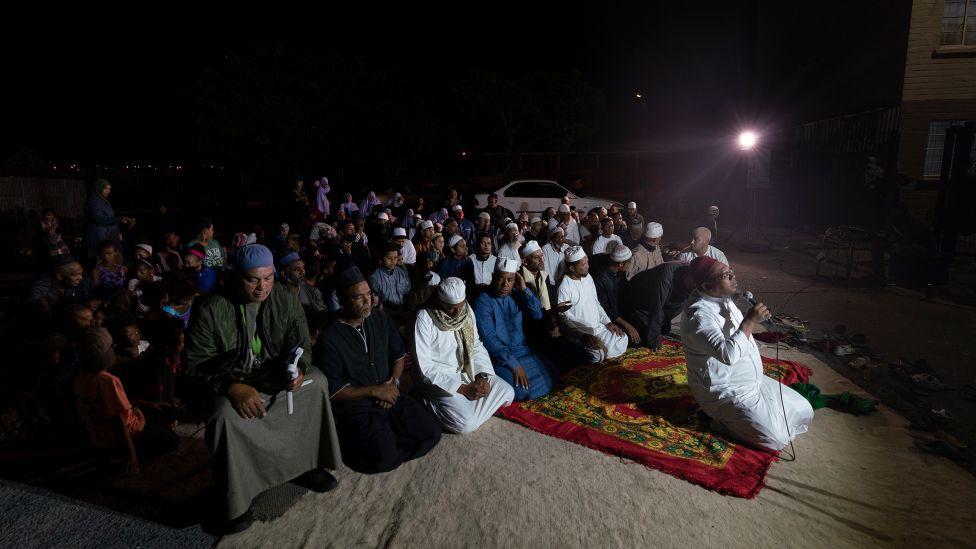 Dhikr is recited by Muslims across the world and has a specific tune to the recitations. It takes place after sunset and before an obligatory evening prayer for Muslims.

The Cape Malays, a community of mixed-Asian ethnicities who have been in South Africa for generations, have their own unique tune.

Some Christians who live in the township also attend – and watch the proceedings from their nearby apartments. 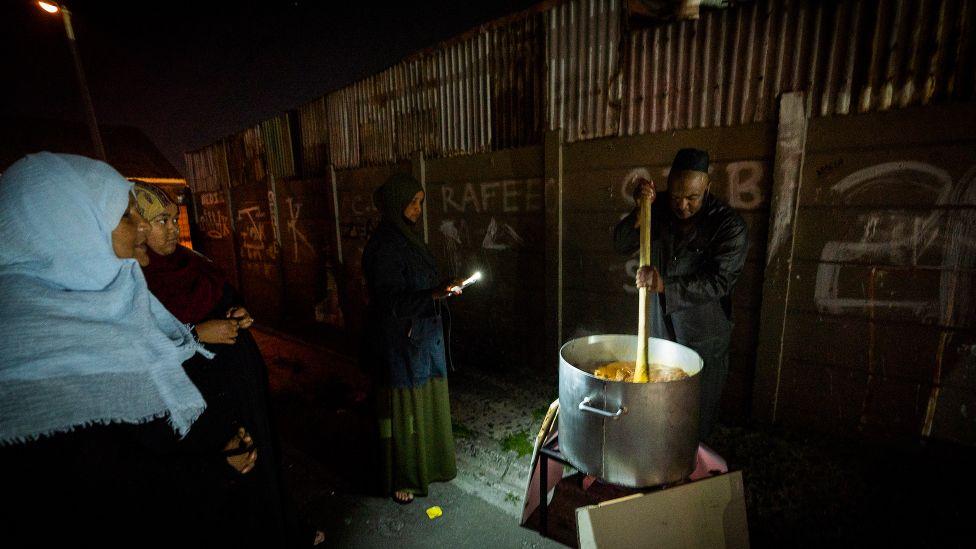 Sheikh Sameeg Norodien, another of the founders of Manenberg’s dhikr sessions, prepares a pot of food for the devotees. There is a custom in Cape Town where people are given cake or something sweet to eat – known as “niyaz” – after the gathering

But as Manenberg is an impoverished community the devotees are given a hot meal after dhikr. 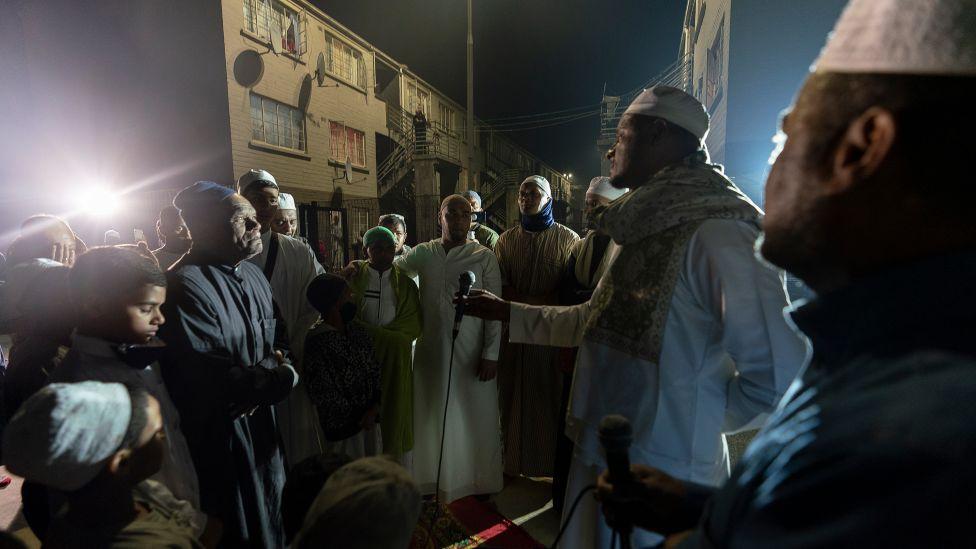 Manenberg was declared a “red danger zone” by the authorities in mid-2015 and for several months ambulances were unable to enter the area unless escorted by the police.

However, the gangsters in certain areas will now sometimes help the Islamic scholars lay out the prayer mats at the beginning of the programmes, says Sheikh Isaacs.

“There was a specific period between 2018 and 2019 where crime in Manenberg decreased during the time we were having the dhikr programmes,” he says. 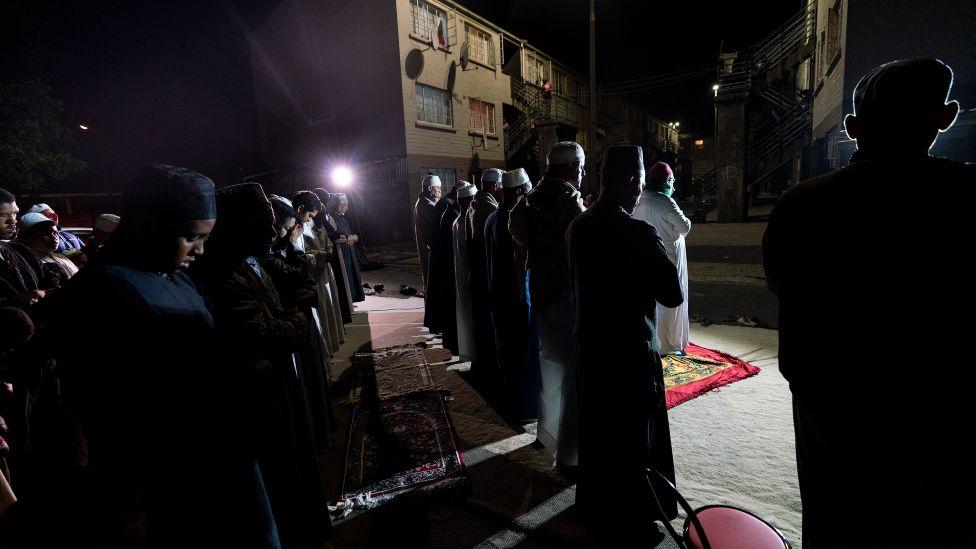 The organisers have received an award from the police in Manenberg for the role the dhikr sessions play in the community.

The short-term goal of the organisers is to bring peace, calmness and tranquillity to the township, their long-term goal is to promote engagement with the relevant authorities to rid it of drugs and gangsterism. 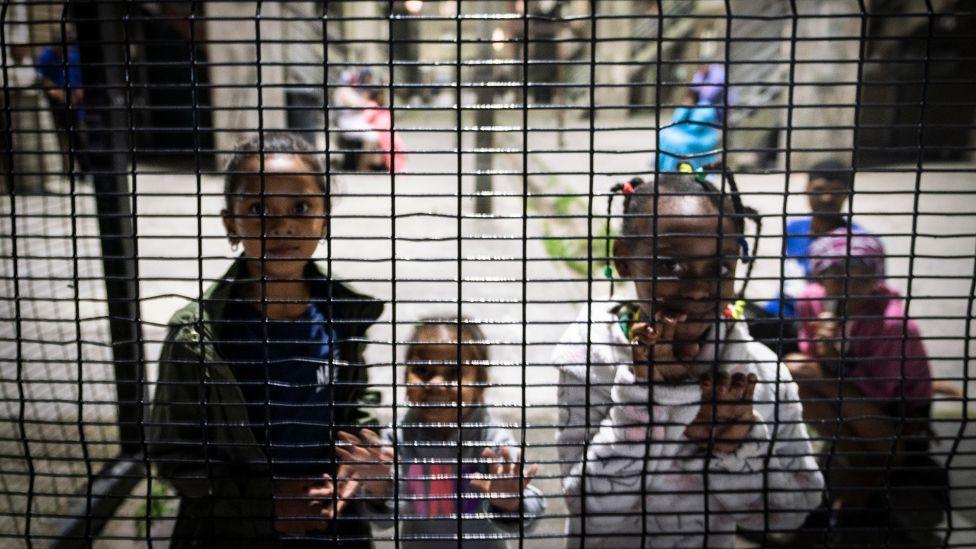 Children are warned about the impact of drugs and are encouraged to join the dhikr sessions in the hope that they do not fall prey to gangsters and drug dealers.

The Christian community is said to be very respectful of the dhikr sessions and the organisers hope to portray Muslims as calm and non-violent. 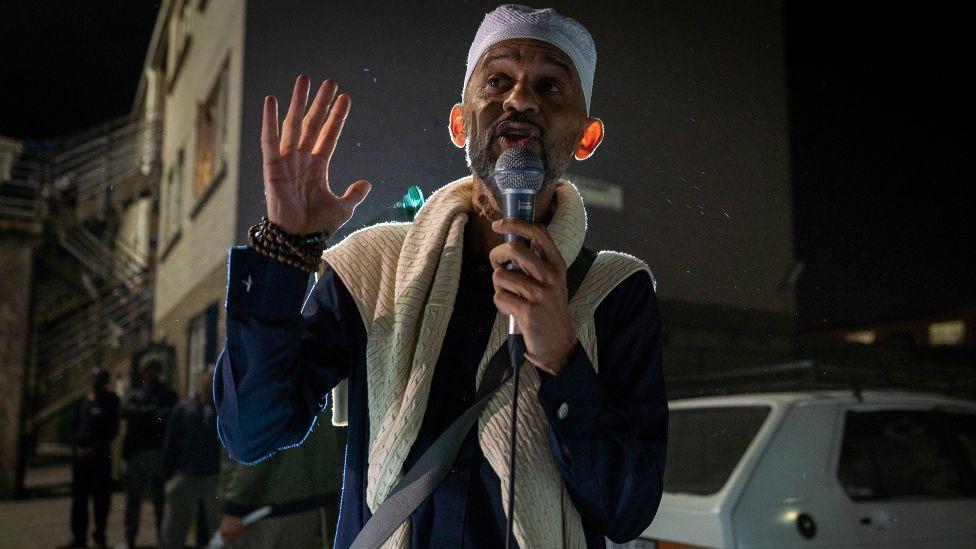 A special person or scholar is invited to talk every Thursday. Here Sheikh Hasan Pandy is seen speaking about the importance of mothers.

Guest speakers use a public address system, so the sound of their messages – covering topics from gender equality to drug abuse – can be heard by others.

The organisers try and get a Christian priest as a guest speaker at some of the sessions. 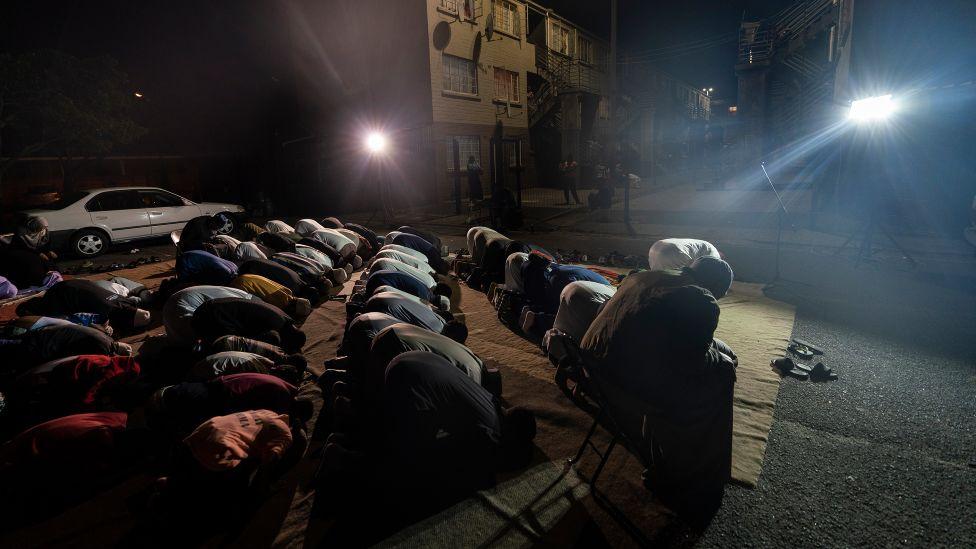 “The dhikr has caused a calmness in Manenberg,” says Sheikh Isaacs.

“We only do it once a week. If we could host the dhikr programmes every day it would have a tremendous effect, but because of logistical reasons we cannot.”