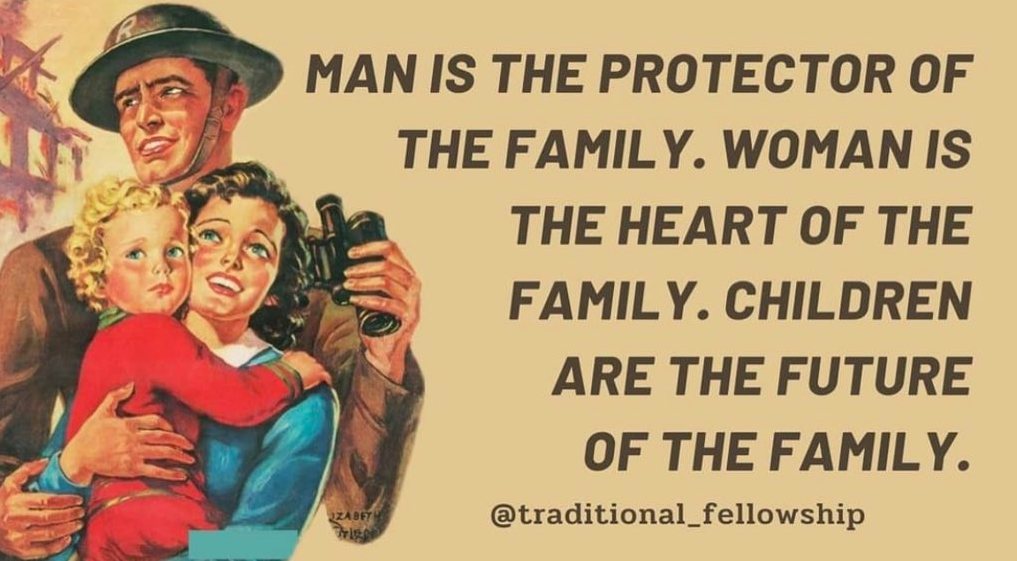 I came across this poster on social media.

and there’s a beautiful picture there of a traditional family with the man as protector of his wife and children. I think it’s produced by the Traditional Fellowship which is a traditional Christian organization promoting traditional values and apart from its intrinsic attractiveness I was struck also by the identical idea we see in Islamic values in the way Muslims understand the family,

Reading a verse from the Quran about that and this verse in chapter 4 verse 34 talks about husbands as providers and protectors, exactly the same thing it says :

so what’s fascinating here is that traditional British values are identical to Islamic values in this area. That’s remarkable. We’ve forgotten that perhaps in recent years in Britain and in the west generally where traditional values have basically been obliterated and now we have all sorts of other ideas but traditional British values and also France, Germany, Spain everywhere really were there in place until quite recently as late as the 1950s and  1960s – before hardcore feminism took over and these roles were blurred or obliterated really.

There’s a hadith actually which speaks powerfully to this, although in a wider context. This hadith on responsibility how each of you, each of us is a shepherd for his flock and the hadith reads :

Amazing to see the similarities there between the traditional British understanding of family roles and Islamic teaching.

So just to stress this again I  think if Muslims can make a positive contribution to British or European life to revivify and bring back healthy ways of relating between men and women and parents and children then this I think would be a key contribution that Muslims can make to the west to actually bring back traditional ways of doing things. The way men and women relate to each other particularly and this is a healthy normal natural god-given way of doing things and this can only bring back positive outcomes. Contrast that with the disorder, breakdown, depression, suicide, abortion, the list is endless, that the other experimentations that we are playing with today have brought about.

Anyway. I just wanted to share that until next time