The Fundamentals of Divine oneness and True Faith

[This treatise is on] the fundamentals of divine oneness and [tenets] upon which it is correct to base [one’s] belief It is obligatory [for a person] to state: I believe in Allah, His angels, His scriptures, His messengers, resurrection after death, that destiny, good and evil, is from Allah Most High, the Reckoning, the Scale, Paradise, and Hellfire; and that they are all true 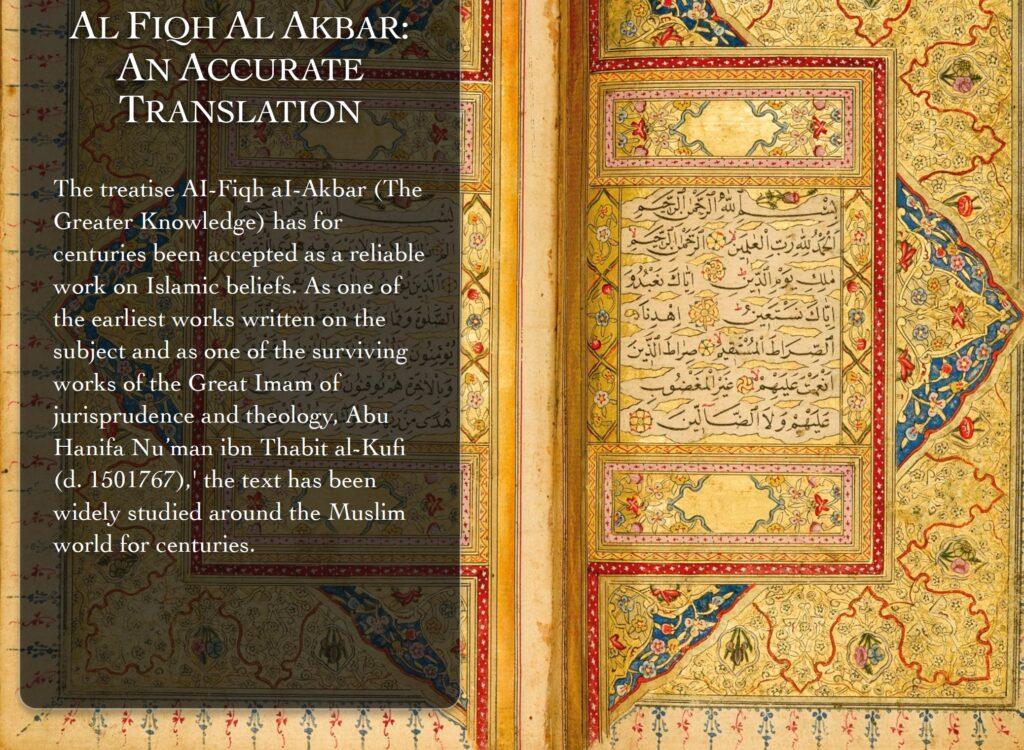 ALLAH AND HIS ESSENTIAL AND ACTIVE ATTRIBUTES

He was, is, and will forever be possessor of His names and of His essential and active attributes. As for His essential [attributes], they are life, power, knowledge, speech, hearing, seeing, and willing. And as for His active [attributes], they are creating, sustaining, bringing into being, originating, making, and others. He was and is ever possessed of His names and attributes; no name or attribute originated later for Him.

THE QUR’AN: THE SPEECH OF ALLAH MOST HIGH

ALLAH IS UNLIKE ANYTHING, AND HIS HAND, COUNTENANCE, AND SELF

Allah is an entity (shay’) unlike any other entity. The meaning of [Allah being a] shay’ [unlike any other] is that He is without body, substance, or accident. He has no definition, no opposite, no equal, and no peer. He possesses a hand, a countenance, and a self, as He has mentioned in the Qur’an.

THE ATTRIBUTES OF CREATING, KNOWLEDGE, PREDESTINATION, AND HIS WRITING IN THE PRESERVED TABLET

Allah Most High created all things from no thing. Allah Most High knew in preeternity all things prior to their being. It was He who apportioned all things and ordained them. There is in this world nothing, nor in the next, except through His will, knowledge, ordination, decree, and in accordance with His writing it in the Preserved Tablet. Yet His writing entails descriptions, not commands.

Ordaining, decreeing, and willing are His attributes in preeternity without description. Allah knows that the nonexistent is nonexistent in the state of its nonexistence, and He knows how it will be when He brings it into existence.

ALLAH CREATED PEOPLE PURE AND THE COVENANT OF THE BEGINNING

Allah Most High created all created beings free from unbelief and true faith. He then addressed them, commanded them, and prohibited them [from certain acts]. Thereafter, whoever disbelieved did so through his own doing by rejecting and repudiating the truth, Allah having forsaken him; and whoever believed did so through his own choosing by affirming [the truth] and being convinced [of it], Allah having granted him divine guidance and assistance.

Allah extracted the progeny of Adam from his loins and endowed them with intelligence. He then addressed them, commanding them to believe and prohibiting them from unbelief. They affirmed His lordship, and that was faith on their part. Thus, they are born on this natural faith. Thereafter, whoever disbelieves has indeed replaced and altered [his natural faith], and whoever believes and affirms has indeed remained steadfast on it and persevered.

Allah does not compel anyone to unbelief or true faith. He does not create people believers or unbelievers, but creates them as [pure] individuals; to believe or disbelieve is the action of the servants.

THE CREATOR AND THE ACTIONS OF HIS CREATION

THE PROPHETS (UPON THEM BE PEACE), MUHAMMAD AND THE COMPANIONS

The prophets (upon them be blessings and peace) are all free from minor sins, enormities, unbelief, and wicked acts. However, some slips and mistakes have escaped them.

Muhammad (saws) is Allah’s beloved, His servant, His Messenger, His Prophet, His chosen one, and His purified one. Never did he worship idols or partner anything with Allah even for a blink of an eye, nor did he ever commit a minor sin or enormity.

The most noble person after the prophets (upon them be blessings and peace) is Abu Bakr, the Most Truthful, then ‘Umar ibn al-Khatab, the Differentiator, then ‘Uthman ibn ‘Affan, Possessor of Two Lights, and then ‘Ali ibn Abi Talib, the Chosen One (may the pleasure of Allah be with them all).

They were [devout] worshippers and steadfast on the truth and with the Truth. We love them all and do not mention any Companion of the Messenger of Allah (saws) except only by way of praise.

THE EFFECTS OF SIN ON A PERSON, WIPING LEATHER SOCKS, TARAWIH AND OTHER MATTERS

We do not charge any believer with unbelief for any sin he commits, even if it is an enormity, as long as he does not regard it as lawful. We do not remove the title of true faith from him, and we call him a real believer. It is possible that the person be an unrighteous believer, without being an unbeliever.

Wiping over leather socks is a sunna. Tarawih prayer during the nights of the month of Ramadan is a sunnah. Prayer is permissible behind any righteous or unrighteous believer.

We do not claim that a believer is unharmed by sin or that he will not enter Hellfire. Nor do we claim that he will remain in the fire of Hell forever, even if he is unrighteous, after leaving the world a believer. We do not claim that our good deeds are [surely] accepted and bad deeds [surely] forgiven, as the Murji’a do. But we state that whoever performs a good deed in conformity with all its conditions and free from corruptive defects, and does not invalidate it by unbelief, apostasy, or bad character until he leaves the world a believer, then Allah Most High will not disregard the deed, but will accept it from him and reward him for it.

If ostentation becomes part of any action, it eliminates its reward; similar is vanity.

Signs of the prophets are real, and miracles of divine favor are true of the friends of Allah. As for whatever is performed by the enemies of Allah, such as Iblis (Satan), Pharaoh, and the Antichrist-some of which, it is narrated, has already occurred and others of which are yet to occur-we do not call them established signs or miracles of divine favor, but will call them the fulfillment of their needs. This is because Allah Most High fulfils the needs of His enemies to delude and punish them. Hence, they are deluded and they increase in their tyranny and unbelief. This is all conceivable and possible.

Allah Most High was the Creator before He created and the Sustainer before He gave sustenance.

THE BEATIFIC VISION OF ALLAH

Allah Most High will be seen in the Hereafter. The believers will see Him, while in Paradise, with their own eyes, without any comparison or modality. There will not be any distance between Him and His creation.

Iman means to affirm and be convinced. The faith of the inhabitants of the heavens and earth neither increases nor decreases in terms of the articles of faith; it increases and decreases in certainty and conviction. Believers are equal in faith and divine oneness, dissimilar in actions.

Islam is to surrender and to submit to the commands of Allah Most High. Hence, there is a literal difference between iman and islam. However, iman (faith) does not exist without islam nor islam without iman: they are as the back with the stomach. Din (religion) is a noun that encompasses iman, islam, and all sacred laws.

All believers are equal in knowledge, certainty, trust, love, satisfaction, fear, hope, and belief therein. However, they are dissimilar in everything other than in the belief in them all.

ALLAH THE GENEROUS AND JUST

Allah Most High is kind and just to His servants: He may give many times more reward to a servant than he is entitled to out of His kindness, He may punish for a sin out of His justice, and He may forgive out of His generosity.

INTERCESSION AND SOME OTHER ESCHATOLOGICAL REALITIES

Intercession by the prophets (upon them be peace) is a reality; and intercession by the Prophet for sinful believers and for believers guilty of enormities who deserve to be punished is an established reality. The weighing of deeds on the Scale on the Day of Judgment is a reality. The Watering Pool of the Prophet (saws) is a reality. Settling of accounts with good deeds between litigants on the Day of Judgment is a reality; if they do not possess good deeds, then bad deeds being cast on them is true and possible. Paradise and Hellfire have already been created and will never cease to exist, the wide-eyed maidens will never die, and the punishment and reward of Allah will never end.

Allah Most High guides aright whom He wills, out of His generosity; and leaves to stray whom He wills, with justice. His leaving a person to stray is His forsaking him, and the explanation of khidhlan (forsaking) is that He not grant a servant divine guidance toward what pleases Him: this is justice on His part. Likewise is [His] punishing the forsaken for disobedience.

It is not permissible for us to state that Satan takes away faith from a faithful servant by force or compulsion. We state instead that the servant abandons his faith, and then Satan takes it away from him.

ESCHATOLOGICAL REALITIES OF THE GRAVE

EXPRESSING THE ATTRIBUTES OF ALLAH IN OTHER THAN ARABIC

THE CLOSENESS AND DISTANCE OF A PERSON TO ALLAH MOST HIGH

The closeness and distance of Allah is not in terms of long and short distances; rather, it is in terms of honor and humiliation. The obedient is close to Him without description, and the disobedient is far from Him without description. Closeness, distance, and turning toward are applied to a servant who converses intimately with Allah. Likewise without modality are the servant’s closeness to Allah in Paradise and his standing before Him.

The Qur’an has been revealed upon the Messenger of Allah (saws) and written in texts. The verses of the Qur’an, in that they are the speech of Allah Most High, are all equal in virtue and exaltedness, except that some possess [both] the virtue of [their] mention along with the virtue of what is mentioned [in them, i.e, their subject matter], such as the Throne Verse, which deals with the exaltedness, sublimity, and attributes of Allah Most High; therefore, the two virtues are combined in it that of being mentioned and that of its content. Some verses possess only virtue of being mentioned, such as the stories of the unbelievers, which have no virtue in their content (namely the unbelievers). Similarly, the names and attributes [of Allah Most High] are all equal in exaltedness and virtue, without any difference between them.

ABU TALIB, THE PARENTS OF ALLAH’S MESSENGER AND HIS CHILDREN

[The Prophet’s uncle and ‘Ali’s father, Abu Talib, died an unbeliever.] Qasim, Tahir, and Ibrahim were the sons of the Messenger of Allah (saws), and Farima, Ruqayya, Zaynab, and Umm Kulthum were all his daughters.

WHEN DOUBT ARISES ABOUT ANY OF THE SUBTLETIES OF TAWHID

Whenever any issue from the subtleties of the science of divine oneness pose problems for a person, it is obligatory that he believe immediately whatever is correct according to Allah, until he finds a learned person and inquires from him. It is not permissible for him to delay in his inquiry, and he will not be excused for abstaining from it. He will be committing unbelief, if he hesitates.

CONCERNING THE ASCENSION AND SOME SIGNS OF THE LAST DAY

The report regarding the Ascension is a reality. Whoever rejects it is a misguided innovator. The emergence of the Antichrist, Gog and Magog, the rising of the sun from its place of setting, the descent of Isa (saws) from the heaven, and all the signs of the Day of Judgment according to what has been related in the authentic narrations, are a reality and destined to occur. Allah Most High guides whom He wills to the straight path.