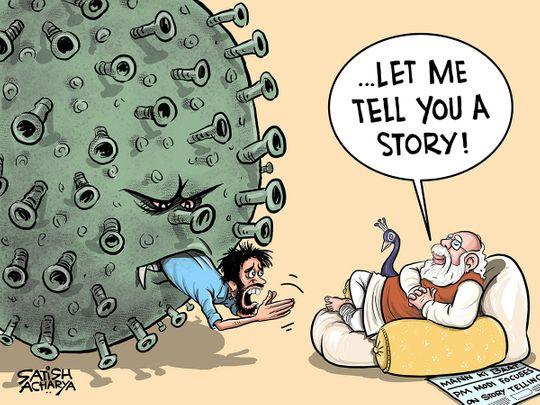 By Rana Ayyub via time.com

Ran Ayyub is an Indian journalist and the author of Gujarat Files: Anatomy of a Cover Up

Dr. Jalil Parkar, one of India’s leading pulmonologists, wears his exhaustion on his face.

In between treating patients at the COVID-19 intensive care unit of Mumbai’s prestigious Lilavati Hospital, Parkar appears regularly on TV to give updates on the current, devastating second wave of the pandemic that is killing thousands of Indians. He himself spent time in the ICU last year and almost died after suffering multiple COVID-complications. Now, he confesses to losing his calm over what he is seeing unfold every day.

“Our healthcare system has collapsed. We have let down our own people in the country,” he says. “What can doctors do when our infrastructure is unable to take the patients, when there are no hospital beds or oxygen cylinders?”

On Friday, April 23, India recorded 332,730 coronavirus cases, the highest single-day total of cases recorded globally so far. It had broken that record the day before, too. Since the pandemic began, India has confirmed more than 16 million cases and more than 186,000 deaths. India’s total confirmed COVID-19 cases to date are second to the United States overall, and its daily case and death rates are rapidly catching up with the U.S.—which means, given India’s much larger population, its raw case and death numbers will surpass the U.S. soon if the trends continue. Every day, more than 2,000 people in India are dying with COVID-19, according to official numbers—and experts believe that number is a dramatic underestimate. Three health officials who asked to remain anonymous told me they believe that the daily number of COVID-19 deaths in India has already crossed the 10,000 figure. There is no escape from it; in the past week alone, I have lost four people to COVID-19—a distant relative, my next-door neighbor, and two of my closest friends, both in their mid-30s.

Increasingly, people are dying in plain sight. On Friday, Delhi’s leading Gangaram Hospital issued an SOS that it only had enough oxygen left for two hours and that 25 patients had already lost their lives in the hospital due to oxygen shortages. Videos show people stealing oxygen cylinders for their relatives. One devastating video from the BBC shows a woman trying to help her dying brother regain consciousness. “Bajali, why don’t you wake up?” she cries. As I was writing this, the news broke that 22 critically ill patients lost their lives at a hospital in Maharashtra after a leak from the main hospital oxygen tank stopped the flow to their ventilators. Multiple hospitals in India are petitioning the High Courts to seek immediate oxygen supply. If the apocalypse had an image, it would be the hospitals of India.

Despite these inescapable horrors, much of India remains in a sort of parallel reality where COVID-19 is not a threat. Tens of thousands of Hindu devotees continue to show up each day for a dip in the Ganges as part of the Kumbh Mela pilgrimage in Haridwar, Uttarakhand. Millions of worshippers have participated in the weeks-long festival since the first day of bathing on March 11,


despite clear evidence that thousands are testing positive for the virus after attending. In the space of just a few days in mid-April, more than 1,600 cases were confirmed among devotees. In March, when the second wave was already underway, state leaders from the ruling Bharatiya Janata Party (BJP) published full-page ads in national newspapers telling worshippers it was “clean” and “safe” to attend. The Uttarakhand chief minister declared on March 20, “nobody will be stopped in the name of COVID-19 as we are sure the faith in God will overcome the fear of the virus.” It wasn’t until mid-April that Hindu nationalist Prime Minister Narendra Modi tweeted that participation in the pilgrimage should be kept “symbolic” to combat the pandemic. Is it any wonder that the festival has become a super-spreader event?

I’ve been reporting on COVID-19 in India since March 2020, and it’s been bad before, but what I’m witnessing in this second wave is like nothing I’ve seen.

Healthcare workers are stretched beyond all comprehension. When I visited the state-run Navi Mumbai Municipal Corporation hospital on Sunday, I saw a nurse sitting on the staircase with her head in her hands. She told me she’d been struggling with nausea. The bathrooms had not been cleaned; the workers had given up because there is only one toilet for every 20 COVID-19 patients. The nurse, who did not wish to be named, said she herself was recovering from the virus. Her request for leave had been denied three times and she wished she could resign, but her family of six depends on her. “This is hell, you tell me, is this not?” she said. “They talk of worshipping the medical fraternity but they have left us to die.”

The second wave of cases has been made more deadly by oxygen shortages in hospitals. An investigation by Indian news website Scroll.in revealed that the country’s government waited until October 2020, eight months after the pandemic began, to invite bids for a $27 million contract to place oxygen generation systems inside more than 150 district hospitals. Six months later, most still aren’t up and

running. Hospitals in the states of Haryana, Maharashtra and Gujarat have been issuing distress calls for urgent supplies of oxygen. Two patients in a Gujarat hospital died because of oxygen shortages on Wednesday.

States are now feuding with each other to obtain supplies. In a recent tweet, Anil Vij, a minister from the state of Haryana accused the neighboring Delhi government of stealing oxygen canisters from a truck en route to Haryana. Vij later told the Economic Times that he had ordered police protection for oxygen trucks so that they are not stolen by other states.

We might also ask how many deaths the government is attempting to hide. In the state of Uttar Pradesh workers were pictured covering the crematorium with tin sheets. Priyanka Gandhi, of the opposition Congress party, accused local authorities of hiding the truth.” In Gujarat, the Prime Minister’s home state, crematoriums are burning day and night, while the state refuses to acknowledge the high number of deaths. The Gujarat high court has demanded the state government reveal the accurate count of COVID-19 patients and deaths.

In other states, the data for COVID-19 deaths are unreliable at best, and at worst fabricated to cover up the devastation. To give just one example, in a crematorium in the state of Madhya Pradesh, 94 bodies were cremated in a day but government data reported only three, according to Times Now. But the more overwhelmed morgues and crematoriums become, the less able state governments are to conceal the truth or to bolster the false narrative that all is well in India.

Responsibility lies at the top

This week, as India reported the highest number of daily cases of anywhere in the world, the ruling Bharatiya Janata Party tweeted a video of one of Modi’s political rallies. (Five states are holding elections in May.) Alongside Modi was his close confidante and home minister, Amit Shah. In theory, Shah should have been in the capital, coordinating with various state governments on how to to deal with the devastating spike in COVID-19 cases over the past few weeks. Instead, Shah has been holding roadshows with thousands of joyous crowds on the streets of eastern India. He broadcasts these rallies live on his Twitter and Facebook accounts at the same time as many Indians’ social media feeds are inundated with people begging for medical help. As thousands are dying, our home minister and our Prime Minister have looked the other way to continue campaigning. (It was only after significant criticism this week that Modi finally announced on Thursday night that he would be canceling his Friday rallies in West Bengal to instead hold COVID-19 management meetings with state ministers.)

Why was India caught unprepared as the second wave ravaged a cross-section of Indian society? The responsibility lies with a strongman regime that has ignored all caution.

It lies with the sycophantic cabinet ministers who praised Modi for successfully dealing with COVID- 19 in India even as testing slowed down and allowed people to become more complacent about the virus.

It lies with the upper-middle-class Indians who were last year banging plates from their high-rise windows and lighting candles to praise Modi and celebrate the success of an unplanned lockdown—while poor migrant workers lost their jobs and had to leave the cities. While the rich booked themselves in hospitals using their contacts, they rarely offered monetary help to their employees.

Accountability also lies with the state ministers who prefer playing power games to actually governing, and who were caught napping as the virus made a comeback. In the state of Maharashtra, as numbers surged, the BJP and the ruling party, the Shiv Sena, were occupied with a face-off over control of the state government. 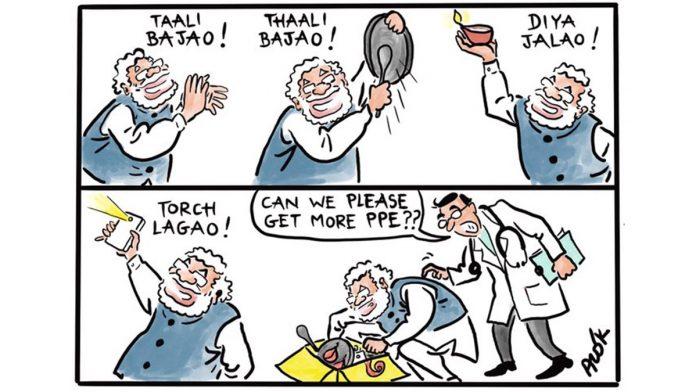 But above all it lies with Narendra Modi, the Prime Minister of India, who calls himself the servant of 1.3 billion Indians, yet who has criminally abdicated his responsibility.

Since January, Modi has organized mass political rallies in various states and has allowed religious events like the Kumbh Mela to go ahead, while his party continued with its dog-whistle campaigns against Indian minorities. In West Bengal, the Modi election campaign warned Hindus of being under threat from Muslim immigrants from neighboring states, with Amit Shah accusing West Bengal’s Chief Minister of appeasing Muslim interests.

The vaccine rollout became a global PR campaign for Modi’s leadership—in March, an Indo-Canadian group sponsored billboards erected in Canada thanking Modi for exporting Indian-made vaccines abroad—even while many Indians were apprehensive about their efficacy and side effects.

The great orator has made little effort to send out a message to the country to get the vaccine, or to dispel the myths surrounding it. In rural India, where more than 65% of Indians live, many are skeptical of the vaccine, with misinformation circulating on social media. The Prime Minister has done little to reinforce public health messaging. In West Bengal, where Modi himself has been campaigning. the BJP Chief has advocated drinking cow urine to treat COVID-19. Vijay Chauthaiwale, in charge of the BJP’s foreign affairs department, wrote a column calling economists and experts part of the “anti-Modi lobby” and encouraging Indians not to reject traditional medicine, including cow urine and turmeric to boost the immune system.

When the vaccine rollout slowed, there was no effort or coordination with the states as Modi’s cabinet indulged in a blame game with ministers from opposition parties. When states like Maharashtra, with the highest number of COVID-19 cases, shut down a majority of its vaccination centers because of a lack of vaccines, the government was not quick to step in. While epidemiologists, specialists and opposition leaders have long urged Modi to give approvals for foreign vaccines, the decision to give emergency use license to the Russian manufactured Sputnik V vaccine was only taken in the second week of April.

This is a moment when the country needs answers. Yet on April 20, when Modi finally addressed the nation about the growing crisis, he warned states that a lockdown should be considered a last resort, and called on young people to form committees to ensure COVID-19 protocols are being followed. On the festival of Ram Navami, he tweeted that people should follow the message of Lord Ram, the Hindu deity for protection, and follow “appropriate behavior.”

The address to the nation received a lukewarm response as the Prime Minister offered no immediate relief to the country. Many Indians called out the prime minister’s failure to take accountability. The hashtag #WeCannotBreathe is trending on Indian twitter.

At this critical juncture in its history, Indians have been left to fend for ourselves.