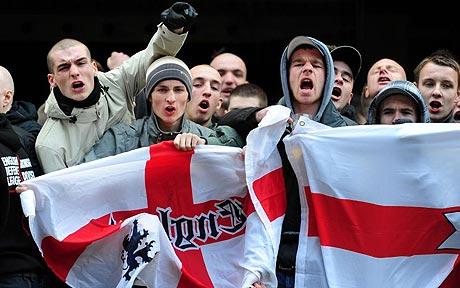 As English as tea and crumpets?

Whither the articulate nutters? Yesterday I got into a Twitter spat with the EDL’s Tommy Robinson (isn’t Twitter fun? Please don’t ban it, Caitlin) and I’m not very impressed. He was angry with a piece I wrote about him linking to an anti-Semitic website, and this cued an evening of tweets accusing me of not understanding the plight of Luton and how I obviously hate the English working class. It’s all predictable stuff, but the latter point does interest me. I’ve often suspected that the EDL’s grip on the popular imagination comes from its claim to represent what remains of the native proletariat – and a lot of middle class folks in the media think that maybe they do, which is why they invite Tommy onto TV shows to share his toilet wall history of Islam with the nation. But they’re wrong. The EDL’s definition of what constitutes the English working class is a classic case of projection.

To take the “working class” tag, never mind that Tommy owns his own business and so is technically petit-bourgeois – making him officially entitled to buy a cream and gold bathroom. The EDL also overlooks a long history of working class progressiveness summed up in three words: the Labour movement. Yes, the contemporary Left is dominated by middle-class wets who dislike many of the people they claim to represent – but this wasn’t always the way. The 100,000 protesters who turned out in 1936 to humiliate Oswald Mosley’s fascists at the Battle of Cable Street were overwhelmingly working class, and many voted to elect the Jewish Phil Piratin as a communist MP for Mile End in defiance of anti-Semitism. Mosley’s blackshirts frequently ran in working class constituencies and always got hammered. They failed to present a populist alternative to the Labour Party because the working class was uninterested in their brand of racist radicalism. In short, while there certainly is a protectionist tradition within England’s working class – fueled by the fact that they’re the ones who suffer first and suffer the most when the country’s borders are opened to cheap labour – this country lacks a fascist tradition because it runs counter to our homegrown culture.

Which brings me to the more contentious bit of the EDL’s identity: its claim to represent “the English”. The problem with this claim is that a hundred people will come up with a hundred ways of defining Englishness, and each with disagree violently with the other. To quote George Bernard Shaw: “It is impossible for an Englishman to open his mouth without making some other Englishman hate or despise him.” This is a good thing by the way. Nations that are solidly cohesive can turn exclusivist and nasty; there’s something of the Vichy about France’s recent treatment of its Muslims and Roma.

So while football hooliganism, covering your car in St George’s flags, wearing balaclavas and spending time in prison is one definition of Englishness, others do exist. The one I prefer is a little more “liberal”, in the 19th century meaning of that word. Its the Englishness that was fascinated by the Orient, the Englishness that saw Christians turn native in North Africa and India and lovingly translate the Koran and the tales of Arabian Nights for the mass market back home. Queen Victoria spent some of her last years harbouring a crush on her Muslim servant, Abdul Karim (a relationship the dear old Daily Mail calls “shockingly intimate”). It’s an Englishness rooted in laws and values rather than race. Crucially, it flowered in the 1800s because that’s when we had a lot more self-confidence as a nation: someone who is secure in their identity is at ease with exploring the imaginations of others. Today our meetings with foreign cultures are awkward precisely because we lack a solid sense of who we are. A lot of the fear shown towards Islam comes from the death of the Christian soul – we see a people who actually believe in something and we are intimidated.

By contrast, most Muslims cling on to values that were once definitively English and that we could do with rediscovering. Islam instructs its followers to cherish their families, to venerate women, to treat strangers kindly, to obey the law of any country they are in (yes, yes, it really does), and to give generously. One recent poll found that British Muslims donate more money to charity than any other religious group. Much is written about the need for Muslims to integrate better into English society, although I’m sure 99 per cent of them already do. But I hope they retain as much of their religious identity as possible – it is vastly superior to the materialist, secular mess that they’re being compelled to become a part of.

I’m not one of those New Labour metropolitan types who wants to create a rainbow nation of hippies – I’m a cultural conservative, a Catholic chauvinist and a defender of everything worth venerating. But its precisely because I’m a traditionalist that I look at Islam and see much to admire – ordered, sensitive to the sacred, civilised – and then look at the British far Right and see much to loathe – ignorant about history, invariably irreligious, law-breaking, lacking in charity. Of course, I’ll be labelled a snob for writing all of this. So, to reassure the critics, I rang up my father – the most working class Englishman I know – and asked him what he thought of the EDL. “Idiots”, he said.

Dr Tim Stanley is a historian of the United States. His biography of Pat Buchanan is out now. His personal website is www.timothystanley.co.uk and you can follow him on Twitter @timothy_stanley.