Israel has elaborate defense systems against military attack and terrorism. Its defenses against its extremists, such as professional bigot Pamela Geller, are much more porous.

Everyone knows, deep down, that hatred feeds on tolerance. That however well-intentioned, a society’s forbearance for the toxic slur, for the poison of ethnic or religious or racial prejudice, does hatred invaluable service.

No one knows this better than professional bigots. People like Pamela Geller, who pass themselves off as supporters of a worthy cause even as their hatred and prejudice stain and undermine anything and everything worthy about that cause.

For years, in the guise of supporting Israel, Geller has engaged in promoting hatred of Islam. In recent weeks, in a campaign timed to coincide with Muslims’ observance of the sacred month of Ramadan, her American Freedom Defense Initiative has run caustic, self-styled “pro-Israel” advertisements on the sides of public transit buses in San Francisco. 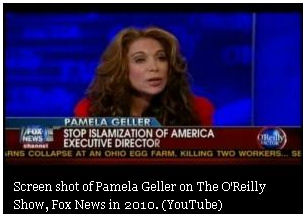 “In any war between the civilized man and the savage, support the civilized man,” the ads begin, white letters on black. Below it, in blue letters flanked by Stars of David, it read “Support Israel” and below that, in red, “Defeat Jihad.”

Last year, when Geller’s group tried to place the ads on public buses in New York, the city’s Metropolitan Transit Authority rejected them as violating its prohibition on messages that demean individuals or groups. But in July, a federal judge in Manhattan ruled that the Geller group had been denied First Amendment guarantees of free speech. That same day, the ads went up in San Francisco.

Geller told ABC News that the purpose of the ads was to counter “fallacious and dangerous” ads on San Francisco area transit trains a year ago, urging cuts in U.S. aid to Israel. “If I had my way, the (“support Israel” ads) would be in every city in the United States of America, and if I can get the funding, that’s exactly what’s going to happen.”

To its credit, Muni, the San Francisco transit agency, did more than simply mount Geller’s message. It condemned the ads. Alongside them. In bus ads of its own.

In a move without precedent, Muni said in the new ads that its policy “prohibits discrimination based on national origin, religion, and other characteristics, and condemns statements that describe any group as ‘savages.'”

Muni spokesman Paul Rose said that while Muni is bound by the First Amendment, “Obviously we think the [Geller-sponsored] ads in place right now are repulsive and they definitely cross the line.”

Of late, in tandem with anti-Palestinian and anti-Arab attacks by radical settlers and Arab-hating Jewish youths in Israel and the territories (“He’s an Arab. He deserves to die,” a 14-year-old assault suspect told a court on Monday), there are troubling signs in America of a tendency to conflate hatred of Muslims with support for a Jewish state.

“The Arabs are one of the least developed cultures,” a “pro-Israel” NGO called the Ayn Rand Center for Individual Rights quotes Geller’s ideological inspiration as having said in a 1974 speech. “Their culture is primitive, and they resent Israel because it’s the sole beachhead of modern science and civilization on their continent. When you have civilized men fighting savages, you support the civilized men, no matter who they are.”

In this light, Bay Area Jews are to be especially commended for denouncing Geller and her works. J., the community newspaper, said that “any right-thinking person, Jewish or not, must oppose these ads.” The Anti-Defamation League called the ads “highly offensive and inflammatory,” and the Jewish Community Relations Council and the American Jewish Committee issued a similar denunciation.

Israel has elaborate defense systems against military attack and terrorism. Its defenses against its own extremists are much more porous.

The Gellers and Kahanists attack Israel at the root. An Israel torn apart from within doesn’t need an external enemy to destroy it. The enemy is right here.