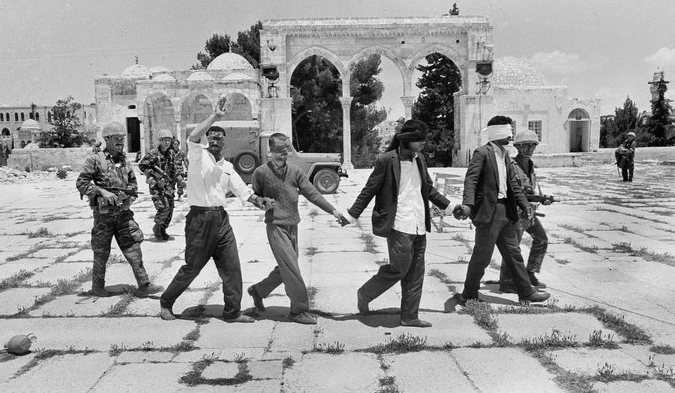 Israel claimed its 1967 land conquests weren’t planned. Declassified documents reveal otherwise. The documents describe detailed preparations that were made in years before 1967, with intention of organizing in advance control of territories.

Contrary to the claim that Israel suddenly found itself holding territories after the June ’67 war, declassified documents reveal detailed directives drawn up by the IDF ahead of the prolonged policing mission it would be tasked with.

For years, most Israeli historiography maintained that the country’s decision makers were taken by surprise by the fruits of the victory that were harvested with lightning speed in June 1967. “The war,” Defense Minister Moshe Dayan said, three days after its conclusion, “developed and rolled into fronts that were not intended and were not preplanned by anyone, including by me.” On the basis of these and other statements, the view took root that the conquest of the territories in the war was the result of a rapid slide down a slippery slope, a new reality that no one wanted.

However, historical documentation stored in the Israel State Archives and the Israel Defense Forces and Defense Establishment Archives in recent years demands that we cast doubt on the credence of that view. The information cited here constitutes just a small part of a wide range of documentation being held in governmental archives relating to the conquest of the territories, and which remain classified. Long-term stubborn persistence was necessary to effect the declassification of some of the documents on which this article is based.

The documents describe detailed preparations that were made in the military in the years before 1967, with the intention of organizing in advance the control of territories that the defense establishment assessed – with high certainty – would be conquered in the next war. A perusal of the information indicates that the takeover and retention of these areas – the West Bank from Jordan, the Sinai Peninsula and Gaza Strip from Egypt, and the Golan Heights from Syria – were not a by-product of the fighting, but the manifestation of a strategic approach and prior preparations.

The IDF’s meticulous preparations to conquer the territories had already begun early in the 1960s. They were, in part, the product of the short and bitter Israeli experience in the conquest – and subsequent evacuation – of the Sinai Peninsula and the Gaza Strip in the Sinai War of 1956. It’s against this background that we should understand the document titled “Proposal to Organize the Military Government,” written by the head of operations, Col. Elad Peled, in June 1961, and presented to Chief of Staff Tzvi Tzur. Six years before the Six-Day War, the proposal consisted of detailed, initial planning for the forces that would be needed to rule in what would become the occupied territories.

Two years later, in August 1963, the IDF’s General Staff Branch (afterward the Operations Branch), which was then headed by Yitzhak Rabin, drew up a widely circulated directive regarding the organization of the military government in the territories. This order sheds light, in its words, on Israel’s “expected directions of expansion,” which in the assessment of the security personnel would be the focus of the next war. These territories included the West Bank, Sinai, the Syrian heights and Damascus, and southern Lebanon up to the Litani River.

The August 1963 order was prepared following an evaluation two months earlier by the military government unit that controlled the lives of Arabs within Israel. In internal correspondence, it suggested that the future organization of rule in the territories had been executed “hastily” to date and “does not completely meet all the needs.”

Called the “Organization Order – Military Government in State of Emergency,” it stated that, “The IDF’s thrust to transfer the war to the enemy’s territories will necessarily bring about expansion [into] and conquest of areas beyond the state’s borders.” Based on the Israeli experience in the period following the Sinai campaign, the document stated that it would be necessary to install a military government quickly, because “these conquests might last for a short time only and we will have to evacuate the territories following international pressure or an arrangement.” The part that followed, however, was meant for those who would be tasked with administering the military government in the future occupied area, and it hints at the intention of the order’s authors: “However, a convenient political situation might develop which will make it possible to retain occupied territory indefinitely.”

Indeed, the exploitation of that “convenient situation” necessitated the meticulous organization of the modes of military rule in the occupied territories. Accordingly, the IDF devoted attention to training and preparing the units and administrative bodies that would rule the Palestinian population. They bore broad responsibility: from legal issues attendant on the occupation of territories, to intelligence gathering about the population and the infrastructures in the West Bank.

Whereas no one within the defense establishment disputed the IDF’s superior power and its ability to conquer swiftly the territories from Egypt, Jordan and Syria – before 1967, officers in the military government that existed inside Israel were apprehensive about the preparation of the units that would rule in the territories. Along with the military doctrine that called for the fighting to be moved into enemy territory, a doctrine existed concerning rule of civilians, based on the recognition that following such a takeover, Israel would control an occupied civilian population, whose administration would necessitate the establishment of a military government bureaucracy.

Col. Yehoshua Verbin, in his capacity as commander of the military government inside Israel until 1966, with extensive experience in operating the mechanisms of supervision and control over Israel’s Palestinians, played a central role in preparations for executing the order to establish a military government in the conquered territories. In a moment of frankness, in December 1958, he admitted to a ministerial committee that had convened to discuss the future of the military government within Israel, “I haven’t even decided for myself whether we are doing them more harm or good.” However, as a senior commanding officer, in June 1965, he warned his superior, Haim Bar-Lev, that the command structures of the administration for ruling occupied territories were insufficiently qualified to carry out their future mission. “Very little progress has been made on this subject.” He added, “It appears that the commands of the administration in occupied territories will not be suited to fulfill their tasks.” This was two years before the war.

Involving officers of the military government that had been imposed on Israel’s Palestinian citizens since 1948 in the planning was logical, because the organizational and military framework that operated vis a vis that community constituted the basis for rule in the territories that would be conquered in a war. In 1963, the units of the military government already had 15 years of experience in imposing “order” and supervision over those Palestinian citizens, by means of a strict regime of permits. From a military perspective, it made sense for this body to serve as the model for the structure of rule in the territories that would be conquered in the next war.

However, after the 1967 war, Defense Minister Dayan rejected the proposal of Shin Bet security service chief Yosef Harmelin to replicate the forms of control of the military government in Israel in the territories (a stance that for years was cited to demonstrate Dayan’s supposed enlightened view). However, even though Dayan generally refrained from appointing former military governors from within Israel as governors across the Green Line, the normalization of the “enlightened occupation” bore a character similar to that of the military government that had existed within Israel. Accordingly, the vaguer the temporariness of the occupation became, the cruder and more violent it became.

To illustrate the direct line that connected the military government that existed within Israel (until December 1966) to that operating in the territories after the June 1967 war, it’s sufficient to look at the metamorphosis its official branches underwent. In the months following the war, the unit that had operated the military government in Israel was rebranded as the “department of military administration and territorial security.” Today it’s known by a different, catchier name: “Coordinator of Government Activities in the Territories.”