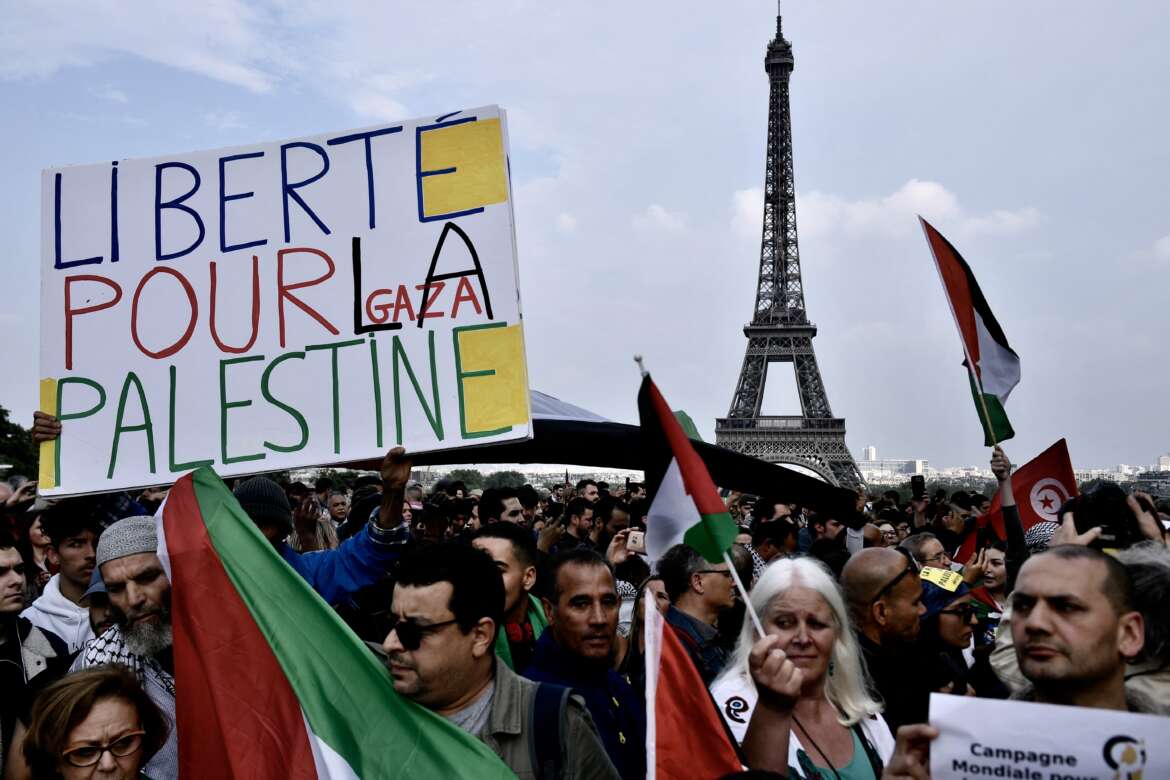 (above pic :  Northern Paris – demonstration against Israel’s use of force in the Gaza Strip)

Israel should take note: the weight of opinion is turning against it

Thanks in part to a global focus more intense than on any other conflict, western attitudes to the Middle East may be shifting.

It’s not over, because it’s never over. But there is at least the hope of a pause. After less than a fortnight in which nearly 250 people have been killed, both Hamas and Israel agreed late on Thursday to hold their fire, each crafting a victory story to tell the world and themselves.

For Hamas, the narrative is simple enough. Despite being caged in a tiny terrain, and with a fraction of their foe’s resources, they managed to surprise the enemy and strike at its civilian heart. They unleashed a torrent of missiles, more sophisticated than before, some of them breaching Israel’s Iron Dome defence system and landing not only on Israel’s peripheral towns but also its central city of Tel Aviv. It can claim, ahead of its Fatah rivals in the West Bank, to be the guardian of the Muslim holy places in Jerusalem. What’s more, it watched with satisfaction as a hole was ripped in Israel’s social fabric, with the country’s Jewish and Arab citizens attacking each other on streets they once shared.

For Israel, the generals are briefing that Operation Guardian of the Walls degraded Hamas’s military capacity, that most of those it killed were Hamas fighters, and that more has been done in the last 10 days than the equivalent offensives of 2009, 2012 and 2014 combined.

But they’re not fooling anyone. Israel knows that it has endured a strategic disaster, the “most failed and pointless border war” in its history, according to Haaretz’s editor, Aluf Benn. It did not see the Hamas attack coming and its vulnerability under fire will have been noted by Hezbollah to the north, which holds a much more powerful arsenal than Hamas’s, and by Hezbollah’s patron in Tehran.

But they’re not fooling anyone. Israel knows that it has endured a strategic disaster

Still, the bigger failings predate and go beyond this latest eruption. Israel told itself all was quiet on the Gaza front. More than that, it thought it had stilled the Palestinian issue altogether, convinced that its “Abraham accords” with Gulf states and others had made the Palestinians all but irrelevant. It has now seen the folly of that delusion.

Which points to the other strategic danger for Israel. It could yet prove ephemeral; the international attention span is short, people might soon scroll on to the next big thing. But plenty of credible observers wonder if a turning point was reached this last fortnight in the way the Israel/Palestine conflict is seen around the world and especially in the west. For a loud and influential segment of opinion, it is being reframed not as a national conflict of competing claims, but as a straightforward matter of racial justice. Note the placards at last weekend’s demonstration in London: Palestine Can’t Breathe and Palestinian Lives Matter.

Framed that way, #FreePalestine could be on its way to joining #MeToo or #BlackLivesMatter as an issue that a global generation regards as of paramount importance, championed not just by politicians but by the leading lights of popular culture, from footballers to singers to fashion influencers with millions of followers. The intercommunal clashes between Jews and Arabs inside Israel reinforce that reading, with incidents of police brutality or discrimination in the criminal justice system that seem to map neatly on to the BLM template.

Those with a strong connection to Israel scratch their heads at this, wondering why, of all the appalling things going on in the world, this is the one that cuts through – bringing huge crowds on to the streets of European capitals, filling up social media timelines. They note that people who have barely stirred at the detention of a million Uyghur Muslims in China; who have not so much as “liked” a tweet about the tens of thousands of Rohingya Muslims murdered by Myanmar; who rarely get agitated by the 200,000 civilians butchered by the Assad regime in Syria or by the 130,000 killed in Saudi Arabia’s war on Yemen; and who might be wholly unaware of the 52,000 estimated to have been killed in the Ethiopian-Tigray conflict since November, have nevertheless been filled with fury by events in Gaza.

Much of the explanation is that Israel/Palestine is simply more visible, with media coverage on a scale unmatched by any of those other catastrophes. When 6,700 Rohingya Muslims were killed in a single month, the major broadcasters did not fly out their presenters to anchor coverage on the spot or nearby. There are no hourly updates of the death toll in Ethiopia, and few interviews with or photographs of the grieving relatives of Yemen. A former Associated Press reporter in Jerusalem has written that he was one of more than 40 staff journalists covering Israel/Palestine, which was then “significantly more news staff than the AP had in China, Russia, or India, or in all of the 50 countries of sub-Saharan Africa combined”. The effect, he wrote, is to signal to readers that Israel/Palestine is “the most important story on Earth” – and, by implication, that the wrongdoing there is worse than anything else on the planet.

You could fill many doctoral dissertations asking what explains this intensity of focus. It can’t be the number of deaths, because many, many more have been killed in those other places. It can’t be the fact that Israel is a favoured western ally; so is Saudi Arabia. Perhaps it’s simply that the Israeli occupation has now endured for 54 years, though Turkey, a Nato member, has waged a war on the Kurds nearly as long.

In a way, the search for an explanation is secondary. More important are the consequences. Jewish communities know they have to brace themselves every time violence erupts: this latest episode brought a sixfold increase in reports of antisemitic incidents in the UK, according to the Community Security Trust. Of course, most pro-Palestinian campaigners stress they have no grievance against diaspora Jews. But the fervour stirred up by this conflict can get so hot, it is not always easy to control.

As for Israel, for its leaders to complain about the scrutiny they get is, as the old line has it, like a sailor complaining about the sea. Instead, they need to adjust to the fact that they could soon face a new strategic reality in which the politics of their closest ally, the US, is changing especially. No less striking than Alexandria Ocasio-Cortez branding Israel an “apartheid state” was this week’s move by longtime pro-Israel Democrats in Congress to delay the transfer of an arms package to Israel.

At the moment, it’s easy to dismiss this as a passing fad – to note that even if Capitol Hill might be shifting, plenty of continental European politicians are heading in the opposite direction, becoming more, not less, sympathetic to Israel. But Israel should read the warning signs. Those of us who have long condemned the occupation always argued that if Israel did not do the right thing and end it, it would eventually be branded a pariah state. If the last two weeks are anything to go by, that day is getting closer.