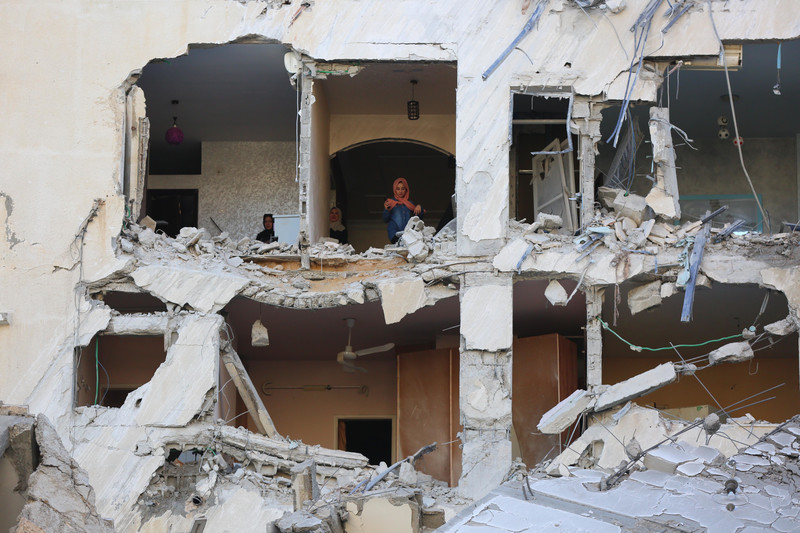 (above image : Palestinians inspect a building damaged by Israeli airstrikes in Gaza City on 12 May)

The Israeli government posted a two-and-a-half-year-old video from Syria, claiming it was from Gaza, in order to justify its ongoing bombing campaign that has killed dozens of Palestinians since Monday.

The video shows the rapid firing of rockets from next to what looks like an apartment building.

“Another video showing how Hamas is firing rockets at Israel from populated areas in the Gaza Strip,” Gendelman wrote.

He then accused Hamas, the Palestinian resistance faction that governs Gaza’s internal affairs, of “targeting civilians while using them as human shields.”

The words “Gaza now” are watermarked on the video in English and Arabic.

But there is one problem: The video is old and does not appear to originate from the Gaza Strip.

The exact same video, just two seconds longer, had been posted on YouTube on 22 December 2019 by a user who indicated that it was filmed in Maarrat al-Numan, a city in northeastern Syria.

The original video contains no watermark or text suggesting any connection with Gaza.

This is a familiar propaganda tactic.

The video showed a man firing a mortar. Behind him was a group of small children huddled with an older man.

But this too was a video from the civil war in Syria, with no connection to Gaza.

In another tweet on Tuesday, Gendelman posted a video showing men lying on the ground pretending to be incapacitated.

“Hamas, as per usual, is trying to mislead the media and public by staging fabricated plays, making young men who are alive appear to be corpses,” he wrote.

The video, however, appears to have been originally posted on video-sharing platform TikTok on 26 March.

The user who posted the video, Moslem Abo Rabea, indicates on his profile that he lives in the city of Nazareth in northern Israel.

Hamas is not mentioned in the video.

There is a watermark on the video posted by Gendelman indicating that it was taken from Abo Rabea’s TikTok profile.

The same men appear together in other videos posted by Abo Rabea on the same day.

It is unclear what the original context of the video posted by Gendelman is, but what is certain is that it predates the current escalation in Gaza and appears to have no connection to the territory.

Lying for propaganda value appears to be a longstanding tradition for Netanyahu’s spokesperson.

In 2019, Gendelman tweeted an image of female protesters in Gaza holding Palestinian flags, calling them “ISIS women,” without providing any proof that they did in fact support the so-called Islamic State.

In April 2018, Gendelman misleadingly used an image of large tire fire at a landfill in Texas along with a tweet accusing Hamas of planning to torch the Israel-Gaza boundary fence with fire using tires.

The picture appears to have been taken from a video of a tire fire in Odessa, Texas, posted on Youtube in April 2017.

The same month, Gendelman tweeted a video clip containing fake subtitles, which claimed a young woman was saying something different than she actually did.

In 2012, Gendelman posted a graphic that looked like a hospital sign, published by the Israeli army, purporting to show that Hamas leaders hide under hospitals and stockpile weapons there.