Critics of the Israel lobby’s influence in US politics often say, tongue-in-cheek, that Israel should be named the 51st state. But this presidential election season, that sentiment comes close to the reality of how the Republican Party is treating the country. Israel, like the 50 states in the US, will be a source for votes and money and a backdrop for presidential campaigning.

The Republican Jewish Coalition (RJC) has partnered with an Israeli group to encourage Israelis who are American citizens–including West Bank settlers–to vote in the 2012 elections. The effort is also being promoted by a group called Republicans Abroad Israel. 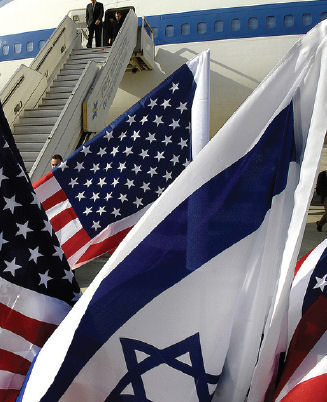 The partnership, and presidential candidate Mitt Romney’s plan to visit Israel in late July, makes clear that the Republicans will use President Barack Obama’s policy towards Israel as a cudgel to score political points and woo Jewish voters and donors — though most American Jews vote Democratic. The politicking about how Obama is an “anti-Israel” president obscures the reality that Obama has not touched the sacrosanct US-Israeli alliance and has continued to lavish aid and diplomatic support to the Jewish state. Approximately 250,000 American citizens live in Israel– and many of them lean right. According to the Los Angeles Times, 75 percent of Americans in Israel voted for John McCain in the 2008 election, essentially the same share of American Jews who voted for Obama overall.

RJC and a group called iVoteIsrael, whose mission is to encourage Americans who are also Israeli citizens to vote in US elections based on “who will support and stand by Israel,” held a number of events in Jerusalem in early July promoting their campaign. RJC executive director Matt Brooks and Ari Fleischer, an RJC board member and the former press secretary for George W. Bush, were the ringleaders of this effort, and they wasted no time criticizing Obama’s Israel policy.

“The choice is between pushing Israel around as President Obama has done, and Governor Romney, who will stand strong by Israel’s side,”Fleischer told an audience of Israeli-American voters. He also told them that “there is a possibility that a large number of absentee ballots coming into Florida, Pennsylvania and Ohio can make the difference.”

While RJC and Republicans Abroad Israel are clearly partisan, iVoteIsrael claims that its effort is nonpartisan. But the Times of Israel reported that “key staffers (of iVoteIsrael) have been closely affiliated with right-wing parties in Israel, the US and elsewhere.” iVoteIsrael’s ideology is clearly right-leaning– you only have to look to where the organization’s “regional directors” and “drop boxes” for registration forms are located to find that out. A number of locations iVoteIsrael works from are in illegal Jewish-only settlements that are seen as violating Palestinian human rights and blocking a contiguous Palestinian state. iVoteIsrael locations include Ma’ale Adumim, a major Jewish settlement outside of Jerusalem, and Gush Etzion, another major settlement. iVoteIsrael’s strategy, and its links to American settlers in Jerusalem and the West Bank, comes as no surprise to MJ Rosenberg, a former employee of the American Israel Public Affairs Committee and a blogger who now criticizes the Israel lobby. “They’re people living in places the US thinks are illegal,” said Rosenberg, referring to longstanding US policy that Israeli settlements are illegitimate. “Mitt Romney speaks to the settlers, and the Republican Party speaks to the settlers.”

Rosenberg has also criticized iVoteIsrael for what he called an “anti-Arab” video produced by the organization. In the video, the narrator warns that “an Arabic campaign poster rallied the Arab New Jersey community” in a close congressional race and defeated a “a defender of Israel.” Congress may not always be “reliably pro-Israel,” so “we Americans in Israel…[can’t] let them win.” The RJC/iVoteIsrael effort is only the latest ploy to drum up support for Romney on the issue of Israel. Romney, who has boasted about his friendship with Israeli Prime Minister Benjamin Netanyahu, has repeatedly criticized Obama’s record on Israel. He famously said that Obama “threw Israel under the bus” for saying that the 1967 borders (with land swaps) should be a starting point for  negotiations between Israel and the Palestinians, despite the fact that this is the international consensus and the position of the US since Lyndon Johnson’s presidency. Funding Romney’s super-PAC with millions of dollars is Sheldon Adelson, a right-wing casino mogul with close ties to Netanyahu and an ardent opponent of a Palestinian state. Adelson also sits on the RJC board. And other Romney campaign fundraisers have formerly supported Obama but flipped to Romney over the issue of Israel.

The Romney campaign recently announced that its candidate would be traveling to Israel in late July. A $50,000 per plate fundraiser was scheduled in Jerusalem, but had to be rescheduled because the chosen date coincided with a Jewish day of mourning. But Romney and the Republican Party’s rhetoric wholly distort Obama’s record on Israel. While the Obama administration voiced criticism of Israeli settlements in the beginning of his term, that rhetoric has largely disappeared after pushback from the powerful Israel lobby. Ehud Barak, the Israeli defense minister, has said that “the Obama administration is backing the security of Israel…in a way that could hardly be compared to any previous administration.”

Regardless of the facts, the Romney campaign and RJC are trying to outflank Obama on the right on Israel. And they’re stooping so low as to court Americans who live in illegal settlements that stated US policy regards as an obstacle to peace.

Alex Kane is AlterNet’s New York-based World editor, and a staff reporter for Mondoweiss. Follow him on Twitter @alexbkane.