Israel’s separation wall is unjustly disassociating
Palestinian neighbourhoods from the city of Jerusalem. 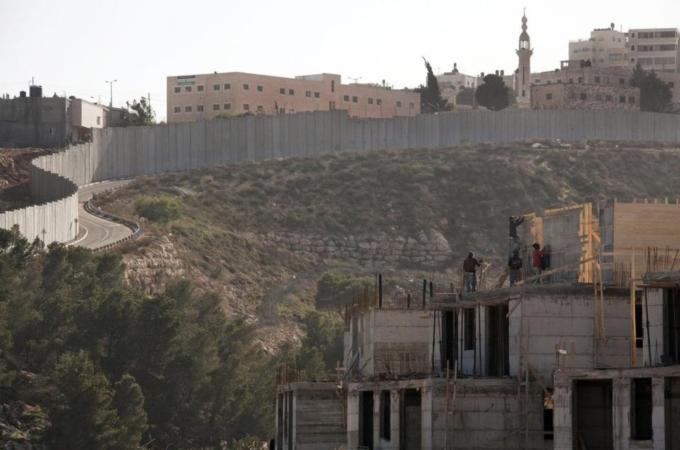 In East Jerusalem, the separation wall forces many Palestinians to pass through checkpoints every day

It was recently revealed that a senior official in the Jerusalem municipality has asked the Israeli military “to take responsibility for handling civilian matters pertaining to Jerusalem residents east of the separation fence”.

Ha’aretz reported that “the meeting concluded with a decision to form a committee that will present a plan to the government”.

Tens of thousands of East Jerusalem residents with blue Israeli identity cards living in Palestinian neighbourhoods beyond the Separation Wall are “cut off from the bulk of the city” and forced “to pass through checkpoints on a daily basis in order to get to work, attend school, obtain medical services, visit family, etc”. This “physical separation”, in the words of the UN’s OCHA, means “residents suffer from impeded access to services on the ‘Jerusalem’ side of the Barrier, the lack of municipal services in situ, a security vacuum and increasing lawlessness and crime”.

Behind a new checkpoint, and hemmed in by the Wall and Israel’s colonies, Shuafat refugee camp typifies the bitter irony behind Jerusalem Mayor Nir Barkat’s hollow claim to oversee a “united” city. Household waste gathers in piles, construction is unregulated, and crime is unchecked.

As local doctor Salim Anati told me during one of my visits to the camp in 2010, Shuafat camp is “a problem” for the Israeli plan of making “a continuity of settlements on the east side of Jerusalem” – thus the camp is “on the wrong side” of the Wall. He predicted that “in a few years, Israel can turn around and say that those on the other side of the Wall are no longer part of the city”.

That same year, Jerusalem city councillor Yakir Segev made a speech in which he said that the Palestinian areas east of the Wall were “no longer part of the city“, noting that the “separation fence… was built for political and demographic reasons – not just security concerns”. In December 2011, Mayor Barkat publicly proposed “relinquish[ing] areas of the municipality that are located outside of the fence”, adjustments that, “according to a municipal source”, would mean “a very small territorial gain for Jerusalem, with a loss of approximately 40,000 Arab residents”.

It is a familiar story. Speaking to BBC’s Hardtalk in July 2011, Mayor Barkat confirmed that he wants to maintain a Jewish majority in the city. A 2010 US diplomatic cable records Barkat’s belief that the natural growth of Jerusalem’s Palestinians is a “strategic threat” (comments that the cable notes “reflect long-standing GOI [Government of Israel] policy regarding the desired demographic balance in Jerusalem”). A previous mayor of Jerusalem, Ehud Olmert, said while in office that it is “a matter of concern when non-Jewish population rises a lot faster than Jewish population”.

The desire to be rid of Palestinian neighbourhoods east of the Wall thus shatter two persistent myths. The first is that the route of the Wall was designed for “security”, rather than as an element in a regime of colonial segregation. The second myth is that Jerusalem – where, in the words of Deputy Mayor Meron Benvenisti, “an ethnic population ratioserves as a philosophy” – is a city whose residents enjoy equality. In other words, the myth and reality is a microcosm of Israel as a whole, where the motto continues to be “maximum land with minimum Palestinians, maximum Palestinians on minimum land”.

Ben White is a freelance journalist, writer and activist, specialising in Palestine/Israel. He is a graduate of Cambridge University.