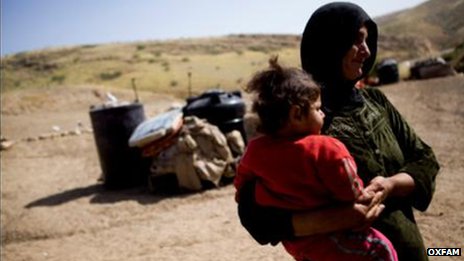 The economic potential of Palestinian communities in the Jordan Valley area of the West Bank is being jeopardised by Israeli settlement activity, a report by the UK charity Oxfam says.

The study suggests Palestinians could generate an extra £1bn ($1.5bn) a year if restrictions to their use of land, water and movements were removed.

It says Palestinians can use only 6% of the land, while settlers control 86%.

Israel criticised the report, saying it had “a clearly political agenda”.

About 500,000 Jews live in more than 100 settlements built since Israel’s 1967 occupation of the West Bank and East Jerusalem. The settlements are considered illegal under international law, though Israel disputes this.

The Jordan Valley – most of which lies within the eastern strip of the West Bank – is about 120km long (75 miles) and 15km wide.

The Israeli human rights organisation B’Tselem say the authorities have instituted a system of permits and restrictions on the movement of Palestinians in the Jordan Valley, making it difficult for those who are not listed as residents to enter it. Israel says the measures are necessary for its security.

At the same time, the group says, Israel has allocated almost exclusive use of the valley’s water resources to the 28 Jewish settlements in the area, to the detriment of Palestinian communities.

“The Jordan Valley… has the potential to be the Palestinian bread basket, yet restrictions on Palestinians use of land, water, and on building in the valley are keeping them poor while helping nearby Israeli settlements thrive,” it adds.

“By one estimate, the Palestinian economy could gain an additional $1bn a year in agricultural revenue if the restrictions on Palestinian use of land, water, and mobility in the Jordan Valley were removed.”