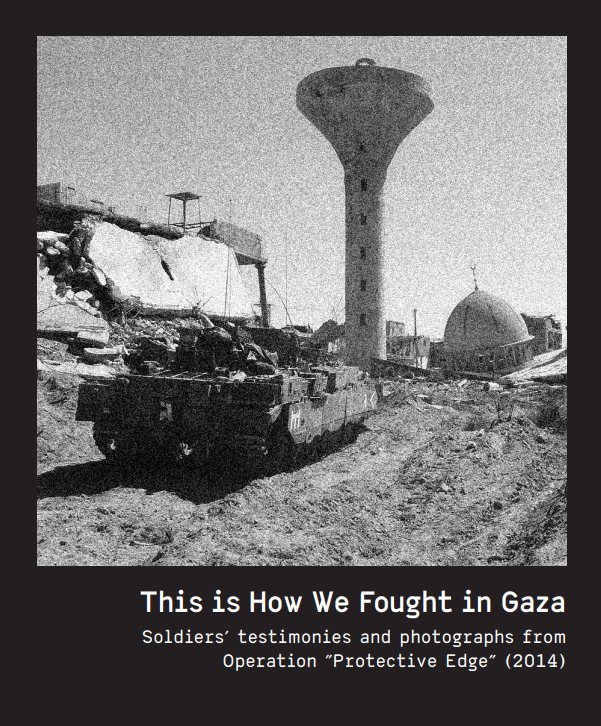 Soldiers from the group Breaking the Silence describe their claims, published in a controversial new report, that the IDF showed reckless disregard for the lives of Palestinian civilians during last summer’s conflict.

Members of Breaking the Silence said Tuesday that even though many of the reactions to the report had been critical, the group felt it was succeeding in its goal of opening a public debate on what it claims was the army’s reckless disregard for the lives of Palestinian civilians during last summer’s conflict.

“People do want to listen, even if there were angry reactions – we want to initiate a discussion on our morality and on the way we fought in Gaza,” said Avner Gvaryahu, a spokesman for the group.

“We want Israeli society to take responsibility,” he said at a presentation of the report held in a Tel Aviv conference hall. “We placed a mirror to the face of Israeli society, and the reflection is not a pretty one.”

The report released last week includes the testimonies of over 60 IDF soldiers and officers who fought in or provided combat support for Operation Protective Edge last July and August. Breaking the Silence says the testimonies indicate that to reduce risks for its soldiers, the IDF operated according to lax engagement rules, opening fire on Palestinian civilians and property even when they posed no evident or immediate threat.

The testimonies show that soldiers were told that any Palestinians remaining in the Gaza Strip neighborhoods that the IDF entered should be considered enemy combatants, said Avihai Stollar, the group’s chief researcher.

A first sergeant from the armored corps talk about the rules of engagement soldiers were given.

The army used fliers, phone calls and other techniques to warn civilians that it was about to enter certain areas of the coastal strip, and “the instructions the soldiers received were: ‘we warned the civilians beforehand and anyone who remained in these neighborhoods is an enemy,'” Stollar said.

During Tuesday’s presentation, some of the anonymous testimonies were read out or shown on video, including one by an infantry soldier who recounts how two Palestinian women were killed after being spotted nearly a kilometer away from an IDF force talking on their cell phones in an orchard.

“The bodies were checked and they were unarmed,” the soldier recalls. “They were still listed as terrorists: they were shot at, so of course they must have been terrorists.”

The army has said it is committed to investigate all claims against it but that Breaking the Silence has not provided evidence of its allegations. The group says it sent a letter to IDF Chief of Staff Gadi Eizenkot a month before publishing the report asking for a meeting and never received a response.

The report, titled “This is how we fought in Gaza,” has generated furious debate in the media and amongst politicians, with critics saying it lacks credibility due to the anonymous nature of the testimonies.

Earlier Tuesday, members of parliament from the left-wing Meretz party read out parts of the report in the Knesset, raising howls of dissent from their opponents to the right. MK Sharon Gal of Yisrael Beiteinu was expelled from the session after calling his Meretz colleagues “criminals” and “a bunch of collaborators.”

A soldier from the armored corps explains why he decided to speak out.

“They are trying to paint our soldiers as murders by taking isolated events that shouldn’t have happened and orders that shouldn’t have been given, and saying that this was the norm,” said Amram Sherby, a 26-year-old student from Bar-Ilan University who held up pictures of soldiers who were killed during the war.

A first sergeant from a mechanized infantry union talks about the religious presence during the war.

Gvaryahu, the group’s spokesman, said that in the last conflicts, and especially during Operation Protective Edge, the IDF had quietly changed its rules of engagement, transforming the use of weapons from a last resort to an almost automatic response.

“I have been shot at and have shot back,” said the former paratrooper, who served in the Hebron area during his military service. “But if I was not in danger I didn’t open fire – that’s how I was trained: when in doubt, don’t shoot.”

“In Gaza, we eliminated the doubt: everyone was involved,” he told Haaretz on the sidelines of the event. “We cannot do this and then say that we did everything possible to avoid civilian casualties.”

Breaking the Silence is calling for the creation of a commission of inquiry external to the IDF, though Gvaryahu said he doubts such a step will be taken.

“At least, there is a discussion,” he added. “We hope that it will not remain on Facebook and that the public debate will bring a significant change to the way we conduct ourselves in war.”

A first sergeant from the armored corps describes firing randomly onto a Palestinian neighborhood.

“Anything inside (the Gaza Strip) is a threat, the area has to be sterilised, empty of people and if we don’t see someone waving a white flag, screaming, ‘I give up’, or something then he’s a threat and there’s authorisation to open fire,” one soldier, identified in the report as an infantry sergeant, said.

Others described incidents in which civilians were killed.

The Israeli military has launched dozens of investigations into alleged wartime misconduct. It rejected the group’s report, saying the claims lacked proof and could not be investigated.

Still, the report is likely to add fuel to Palestinian claims that Israel committed war crimes during the fighting.

Read The Full  Report Below   :