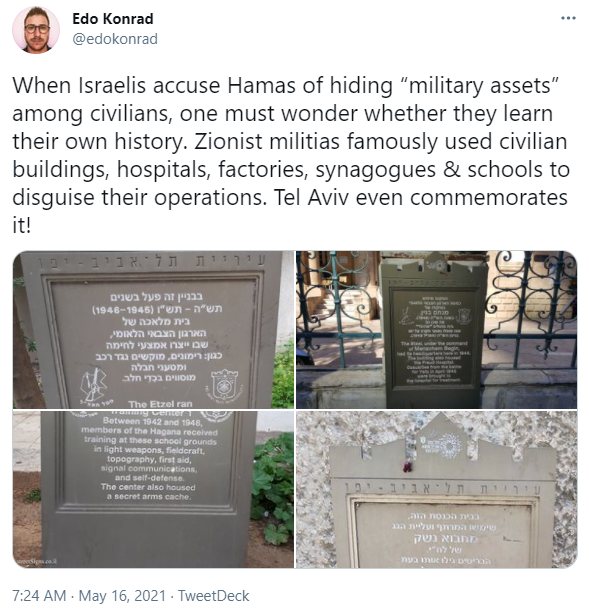 “When Israelis accuse Hamas of hiding “military assets” among civilians, one must wonder whether they learn their own history. Zionist militias famously used civilian buildings, hospitals, factories, synagogues & schools to disguise their operations. Tel Aviv even commemorates it!”

(Edo Konrad  – editor-in-chief of +972 Magazine. Based in Tel Aviv, he previously worked as an editor for Haaretz) 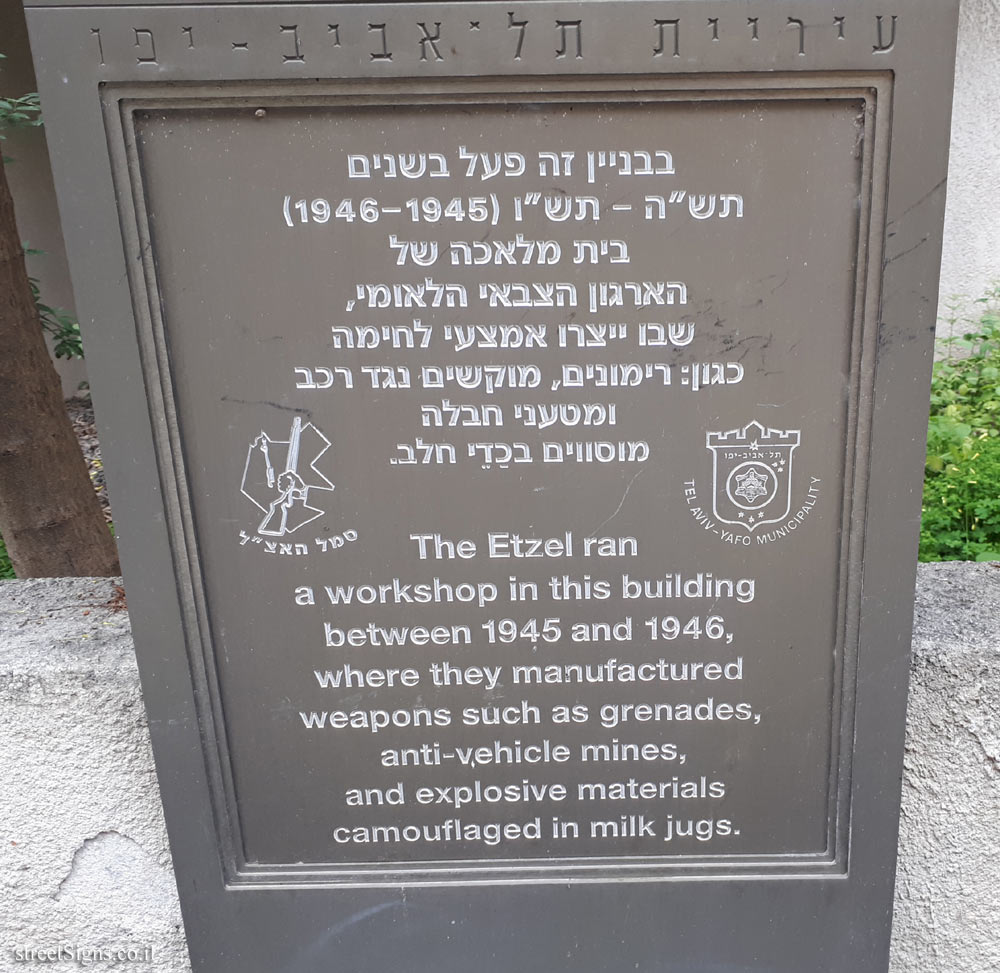 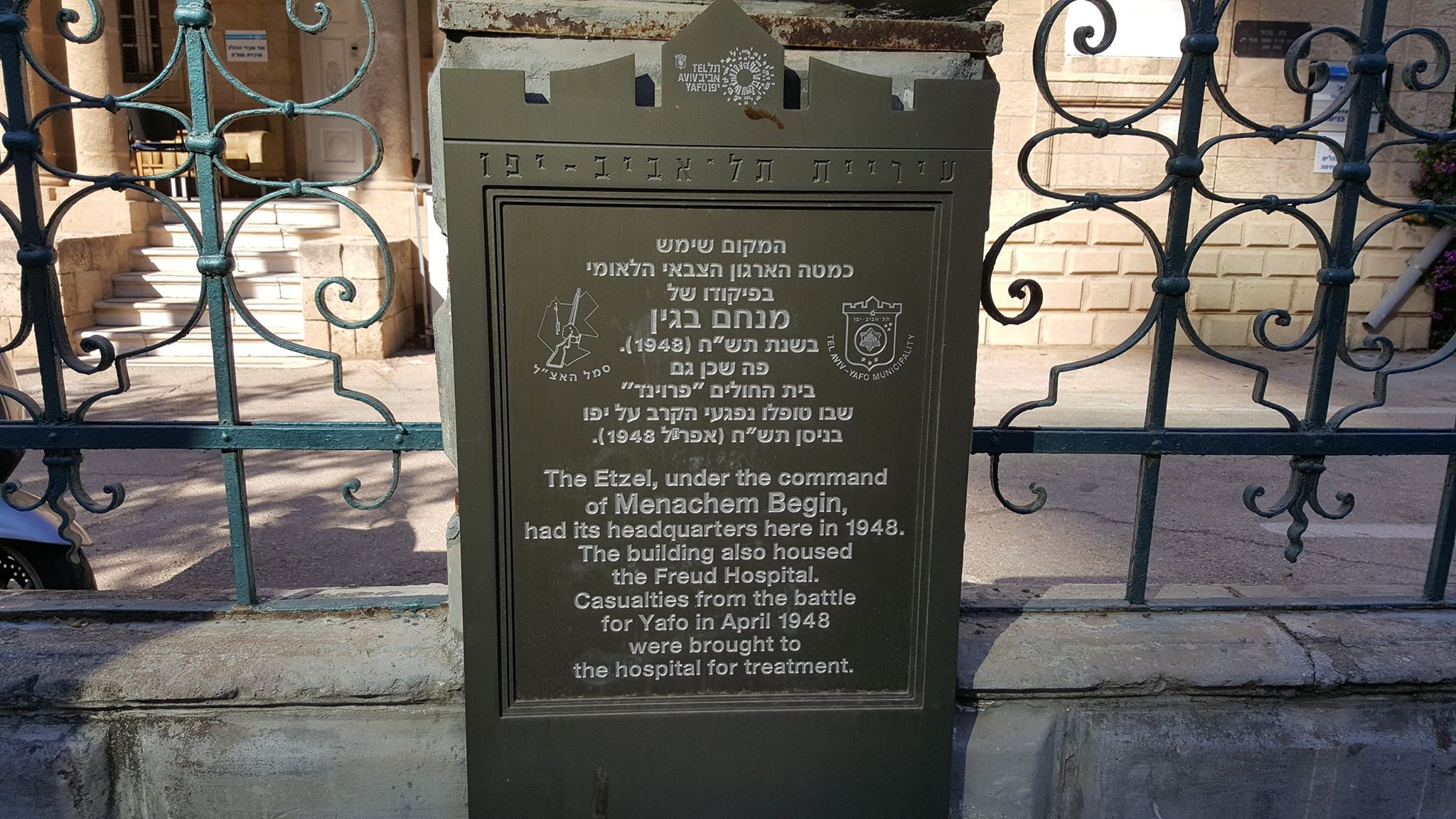 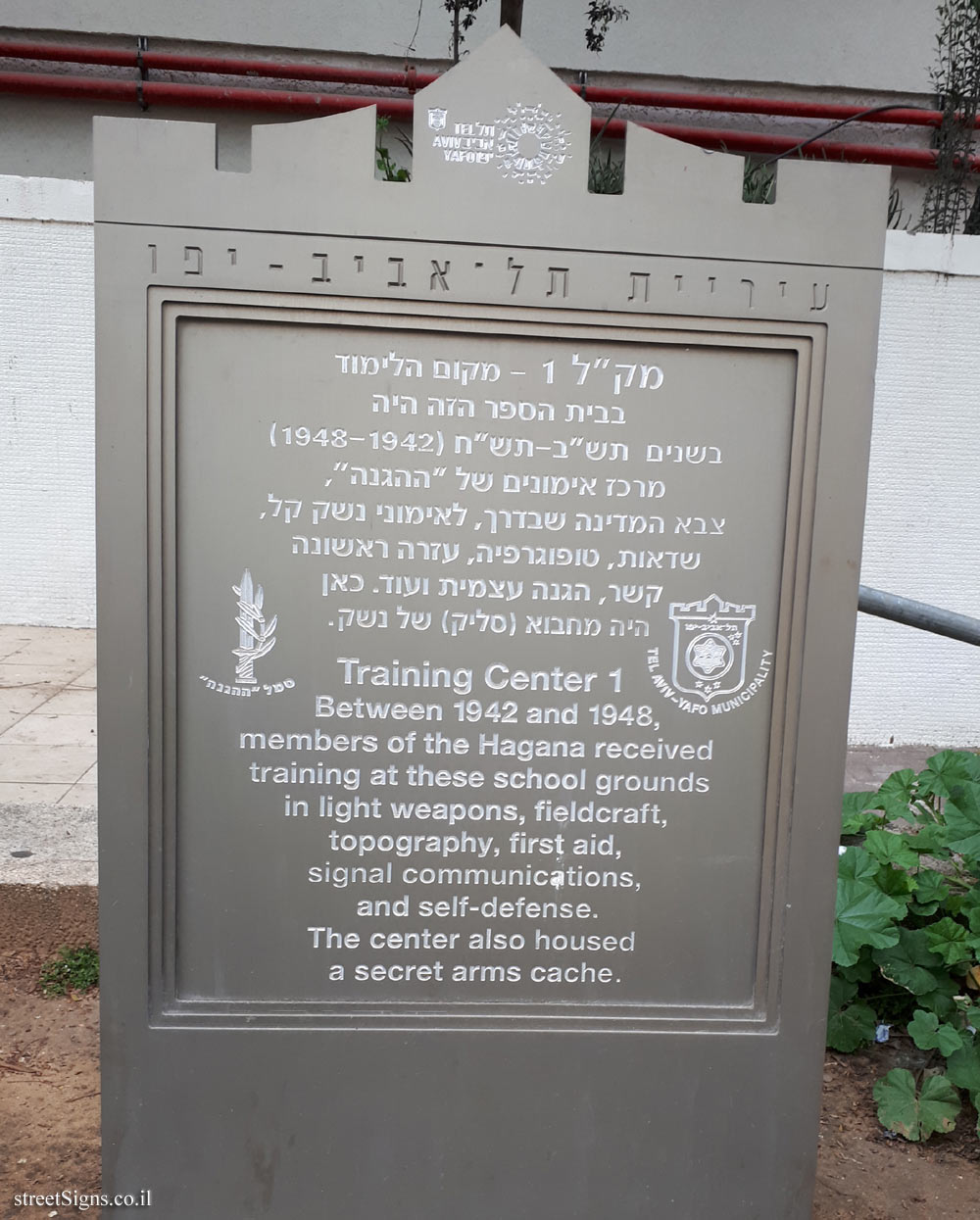 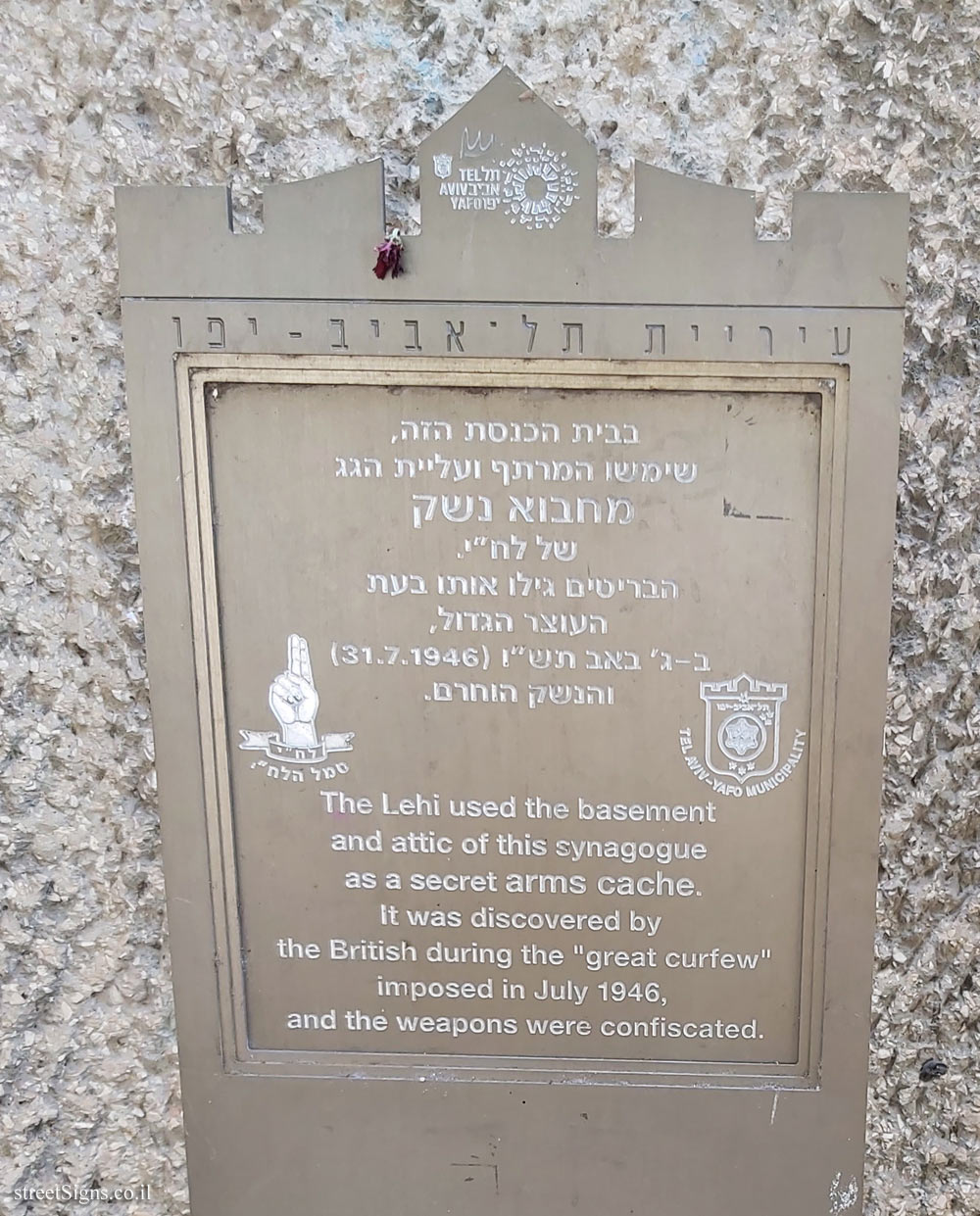 Edo Konrad  – editor-in-chief of +972 Magazine. Based in Tel Aviv, he previously worked as an editor for Haaretz.

Seventy years ago it was the Zionist militias who dug underground tunnels and hid weapon caches among the civilian population. So why is it so difficult for Israelis to understand when Hamas does the same today?

Whether we like to admit it or not, the Israeli press intentionally ignores the realities of Gaza. One would be hard-pressed to find articles about the fall-out from last summer’s Gaza war, including home reconstruction, destroyed infrastructure, high unemployment rates and the trauma that will likely stay with many of the victims for the rest of their lives.

Even during the war itself, Israel’s biggest television station consciously refrained from showing images of destruction in the Strip in its broadcasts, while the country’s biggest newspaper could barely dedicate a paragraph to the deaths of innocents killed by IDF airstrikes.

It is staggering to think that seven months after Israel embarked on a 54-day military adventure, which led to the deaths of 2,200 Palestinians (500 of whom were children), and 66 Israelis soldiers and five civilians (including one child) — it seems like nothing ever happened.

So when do we hear about Gaza? When Hamas and Fatah go head to head, when the international community fails to make good on its commitments, when Israelis are killed or wounded by Gaza militants or when the army happens to discover a new underground tunnel that it missed during Operation Protective Edge.

This weekend, while leafing through the Hebrew print edition of Haaretz, an obituary caught my eye. The piece, written by Ofer Aderet, described the life story of Yehudit Ayalon, who was born in Latvia in 1924 and moved to Palestine in 1936. In 1945, two years before the war broke out, Ayalon and a group of her friends from her Zionist youth group were enlisted into the pre-state Haganah militia for a secret mission.

“They didn’t tell us what they wanted us to do,” she said. “They just told us it would be dangerous and secret. We decided to do it, because it was very Zionist. Here I had the opportunity to do something small that would lead to the establishment of the State of Israel.” The group was soon to find out exactly what its top-secret mission was: building an underground bullet factory.

The factory, named “Machon Ayalon,” was established in an eight-meter deep pit the size of a tennis court — built under a fake kibbutz near the city of Rehovot — created to disguise the factory from the British. Ayalon describes living a double-life full of secrets, tensions and lies, not to mention the danger of being discovered by British soldiers.

Between 1945-1948, Machon Ayalon produced millions of bullets for the famous “Sten” guns, which were used by the Zionist paramilitaries at the time. Ayalon wholeheartedly believed that their efforts “helped tip the scales” in Israel’s favor.

Ayalon’s story is by no means unique. The war effort in the run-up to the 1948 War was a national one, which included soldiers and civilians alike. And like the Hamas militants of today, each and every pre-state Zionist militant group — be it the Haganah, Etzel or Lehi — operated against the British and the Palestinians by building secret weapons factories or hiding weapon caches — known in Hebrew as slikim — among the civilian population. These acts are not retroactively condemned as war crimes by Israelis; on the contrary, they are part and parcel of Zionist mythology and the founding story of the Jewish state.

Don’t believe me? Walk around Tel Aviv and look for the faded, bronze plaques that mark and tell the stories of weapons caches, ambushes against British soldiers and offices that served as illegal meeting points for leaders of the various Zionist militias. Had the State of Israel of today faced off with the pre-state Zionist movements, it surely would have condemned their human rights violations and bombed them into oblivion; no different than what we saw this past summer against Hamas militants who hid weapons in schools and mosques, dug tunnels and built primitive missile factories.

What are we to learn from all this? Not that building bullet factories in kibbutzim or hiding weapons in mosques is acceptable, and not that the Zionist militants and Hamas are one and the same. Rather, the story of Yehudit Ayalon reveals a truth that Israelis have become blind to: oppressed groups will often commit the most immoral acts in the name of resistance to their oppression. And supporters, be they Israelis or Palestinians, will both use the same rhetoric to justify the need to commit those acts.

Nowadays any Israeli can take a tour of Machon Ayalon museum, which honors the Haganah recruits who lived those double-lives and built countless bullets in the factory under a fake kibbutz. I wonder what kind of museums they will open in Gaza 60 years from now.