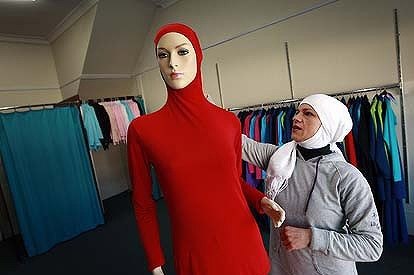 Aheda Zanetti, the Australian designer credited with inventing the burkini, at a swimsuit shop in western Sydney

The Australian woman credited with creating the burkini says bans on the full-bodied Islamic swimsuit in France have boosted sales.

The clothing – which combines “burqa” with “bikini” – leaves only the face, hands and feet on show.

Aheda Zanetti, who claims the trademark on the name burkini and burqini, said online sales were up by 200% 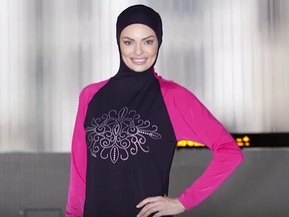 “I’m an Aussie chick, I’ve been here all my life,” she said.

The mayor of Cannes’ ruling

Ms Zanetti said the original intention behind the garment was to allow Muslim women to participate in the Australian beach lifestyle.

“I wanted my girls to grow up to have that freedom of choice,” she said.

“I don’t care if they want to have a bikini. It’s their choice

“No man in this entire world can tell us what to wear or what not to wear.”

She said the design was partially inspired by reports of France banning the hijab in schools to discourage the growth of Islam.

Authorities in several French towns have banned the garment, arguing it defies laws on secularism.

The debate is particularly sensitive in France after a series of deadly attacks by Islamic extremists.