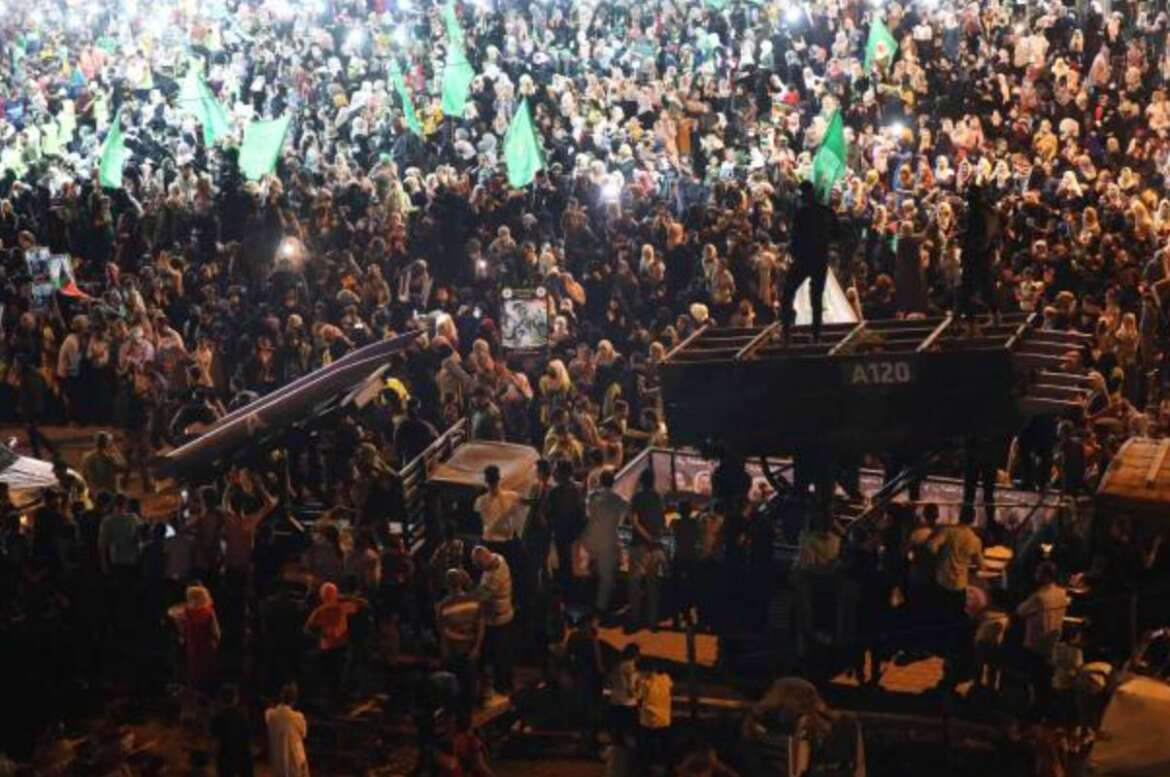 (above pic : Khan Yunis, Gaza, May 27 :  Hundreds of Palestinians attend an event held to commemorate the Palestinians who lost their lives in the Israeli attacks)

Journalist and commentator, Jackie Khoji writes in the Maariv, one of the major Israeli national Hebrew-language daily newspapers published in Israel: Hamas becoming stronger than Israel

Instead of beating it after 30 years of military operations, the Palestinian Resistance Movement Hamas is becoming stronger than Israel, Israeli journalist and Army Radio commentator Jackie Khoji wrote on Sunday.

According to Sama News Agency, Khoji wrote to the Israeli newspaper Maariv, questioning how Hamas succeeded in surpassing Israel.

Despite the heavy attacks that killed hundreds of people and destroyed buildings and tunnels, Hamas fighters and their companions continue provoking Israel as if there were no offensive at all. As time is passing, the leadership of the Palestinian factions are acquiring courage.

Hamas, Khoji wrote, did not start this offensive, but dared to fire rockets at Jerusalem. After the artilleries stopped, they did not wait long to fly incendiary balloons and send threats to Israel, declaring: “Our hand is still on the trigger ready to respond to Israel’s violations in Jerusalem.”

Khoji reiterated: “This absolutely was not a practice of a defeated leadership,” pointing out that Hamas is repeatedly humiliating Israel.

Previous experience has taught us that Israel’s power in Gaza has faded and Yahya Sinwar’s speech following the offensive proved this. Hamas insists on planting anxiety in Israel and attacking the DNA of Israeli society – maybe because Hamas thinks that there will not be another offensive soon.

The Israeli journalist indicated that Hamas’s ability to read Israel’s mindset has improved, and it is able to decide how and where to put pressure – incendiary balloons, rockets or using mediators. Every measure was designed to meet certain needs at a certain time.

Hamas, according to Khoji, has been aware of what is happening in Israel for years. Therefore, when Israel takes decisions related to Hamas, they usually stem from Israel’s needs – for elections or revenge.

Khoji conveyed that no one expected that Hamas would have won after the last Israeli offensive, but its Arab and international audiences expected that it would have provoked this massive army, teaching it a lesson on how to stop its violations. “This is what Hamas did,” Khoji affirmed.

After every offensive, Hamas comes out with its head rising, stronger than before. It is time to ask ourselves, the Israeli Army Radio analyst wrote, what was our mistake?

If the army has been bragging about destroying the infrastructure of these people for 30 years, why do they become stronger? Why do Hamas leaders become more courageous and less afraid of Israel? Have they decoded Israel’s DNA, surpassing Israel generation after generation