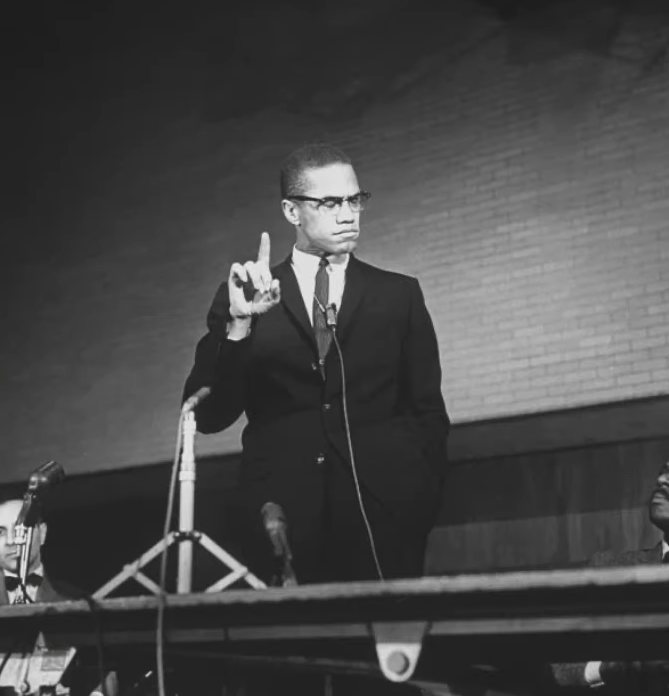 Malcolm X (el-Hajj Malik el-Shabazz  رَحِمَهُ ٱللَّٰهُ‎) here speaking over 50 years ago and his words are still relevant. He speaks about the liberals in a way that makes and made it, even back then, clear that the liberal nor conservative were friends of Black people.

In the New York Tribune in an editorial dated February the 5th 1960 they pointed out that out of 11 million qualified negro voters only two million seven hundred thousand actually take time to vote.  This means that roughly speaking only 3 million out of the 11 million negroes who are qualified to vote take an active part and the remaining 8 million remain voluntarily inactive and yet it is this small minority the three million negro voters who help determine who will be the next president.

If who will be the next president can be influenced by three million negro voters, it is easy to see why the presidential candidates of both political parties put on such a false show with the civil rights bill and promises of integration they must impress the three million voting negroes who are the actual integration seekers and if so much fuss is made over these three million integration seekers what would the presidential candidates have to do to appease the eight million non-voting negroes if they ever decided to become politically active – they hold the balance of power.

Who are the eight million non-voting negroes what do they want? and why don’t they vote. The three million negro voters? are the so-called middle-class negroes or high-class negroes or uppity negroes who are referred to by the late Harvard University sociology professor E Franklin Fraser as the black bourgeoisie who have been educated to think as patriotic individualists with no racial pride whatsoever who believe in and look forward to the future integrated intermarried society that is constantly being promised to them by the negro politician and therefore this integration minded three million minority remain an active part of the white-controlled political parties but it must never be overlooked that these three million negro integration seekers are only a small minority of the 11 million qualified negro voters.  The 8 million non-voting negroes are the majority? The downtrodden black masses they have refused to vote, they’ve refused to take a part in politics because they reject the Uncle Tom approach of the clergy politician leadership that has been handpicked for the for the so-called negroes by the white man himself this clergy politician leadership that does not speak for the negro majority. They don’t speak for the black masses. They speak for the black bourgeoisie, the brainwashed white-minded middle-class minority who because they are ashamed of their race because they are ashamed of being black and don’t want to be identified with black. They are seeking to lose this black identity by mixing and mingling and intermarrying and integrating with the white society. The race problem cannot be solved by listening to the white-minded brainwashed minority. The white man must try to learn what the black majority wants.