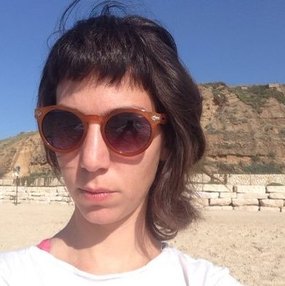 Yesterday the Forward ran an important piece, by Mairav Zonszein, saying that she and other leftwing Israelis are thinking of leaving the country, and many have left already:

Everywhere I turn these days, many of my peers have left, are leaving, are planning to leave or are talking about leaving. My family and I included. The reasons for leaving are always personal, and it’s hard to point to a specific political trend. But the discourse around leaving is indicative of a real crisis in the Israeli left regarding the inability to effect change, and the increasing sense that our ideals are unwanted and that we are outnumbered. Not just at the polls, but at the family dinner table, too.

This is an important piece because it is news, and Zonszein is telling the truth, based on my own travels in Israel earlier this year: lots of left-leaning Jews are thinking of leaving. Two friends of mine have left, a Palestinian and a Jew, because they feel their idealistic hopes of coexistence have no place in Israel. Zonszein says the debate over emigration is raging on her Facebook page and on the Haaretz opinion pages. In January in New York, at a Haaretz photo exhibition, Chemi Shalev mentioned the discussions of emigration, and the immense social pressure against it. Five years ago Gideon Levy reported that more and more Israelis were seeking foreign passports, for fear of the society coming apart.

But no one has covered this story in anything like the forthrightness that Zonszein just did. I have tried several times over the last few months to get people to write about it or talk about it; they wanted to stay under the radar.

So: hat’s off to the Forward and Zonszein for breaking a story that is in the mainstream’s lap. The New York Times or New Yorker should have done this story. They didn’t because they do not want to confront the political crisis that Israel is experiencing, before the world’s eyes, with Haaretz writers and military leaders speaking openly of Nazi and fascistic trends in the society, and the occupation entering its fiftieth year.

Zonszein describes a political climate that has become so inhospitable to liberal views. She first experienced alienation when she was showing up with Ta’ayush to prevent human rights abuses in the West Bank; Tel Aviv liberals had no idea what was going on, and didn’t care to know.

A decade later, and five years since the “tent protests” that saw hundreds of thousands of Israelis out in the streets protesting the high cost of living without any mention of the disenfranchised Palestinian population in our midst, this sense of alienation has only intensified. Instead of gaining legitimacy in Israeli society, activist groups like Ta’ayush, Anarchists Against the Wall and Breaking the Silence, which came of age during the second intifada with the goal of exposing and opposing human rights violations, are now targets of state-sanctioned incitement; they are marginalized even more than they already were, and delegitimized.

Israel currently has the most right-wing government in its history, and “leftist” is a bona fide bad word whose definition just keeps broadening. An Israeli who never set foot across the Green Line but who protested in central Tel Aviv against Israel’s past two wars in Gaza is considered radical. A soldier who has fulfilled his military service and then speaks out against the actions he carried out is a traitor. A 2016 poll shows that 72% of Jewish Israelis believe Israel’s control over the Palestinian territories does not even constitute an “occupation.”

Under these circumstances, how can the left possibly hope to shift the discourse, much less end the occupation?

You’ll see that the piece includes a subliminal advertisement for Boycott, Divestment and Sanctions (BDS), based on the idea that Israel is incapable of changing without significant outside pressure. I wonder if the Forward tempered that statement, but of course BDS is the only game in town when it comes to nonviolent external pressure on Israel. And the mention reflects the fact that the liberal American Jewish community has to come to BDS if it wants to call itself liberal.

At the end of the article Zonszein has not resolved her quandary, but she has managed to get across bald descriptions of Palestinian persecution, including the fact that so many of them can’t go to the sea, as Zonszein can, and–

Every time I experience fear or anxiety about the increasingly violent, herd-mentality society my 2-year old is growing up in, I consider the Palestinian children who are stateless and roofless in Gaza.

My chief feeling about this article is pity that mainstream American publications are incapable of bringing themselves to cover this important story, because they are all so invested in what Max Blumenthal calls dreamcastle Israel.