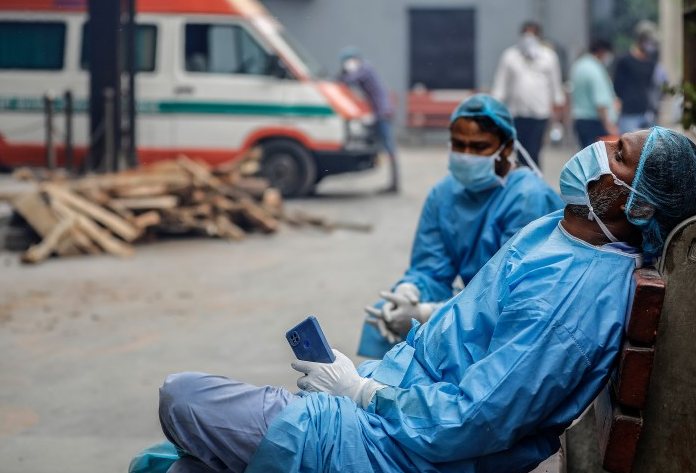 Grief, anger among Indian diaspora in US as COVID crisis worsens

As the pandemic ravages India, the millions-strong Indian diaspora in the US are stricken with panic, pain and grief.

Mississippi, United States – Rayees Ahmed Mirza would advise his mother Najma, 55, in India’s southern city of Hyderabad to wear a mask and not venture out every time he spoke to her over the phone.

From his experience in the United States, the 35-year-old IT professional from Minnesota knew the COVID-19 pandemic in India was far from over.

On April 15, Mirza had just started work when his mobile phone started to ring continuously. He answered and heard the news he dreaded most.

His mother had tested positive for COVID-19, was having extreme difficulty in breathing, and her oxygen levels were dropping.

“I was helpless,” Mirza told Al Jazeera. “I gathered strength and made calls for at least five straight hours to find hospitals across Hyderabad to get her admitted, but all of them had no space.”

Later, one of the family friends arranged a bed in the city’s Medisys Hospital, where doctors immediately put her in an intensive care unit.

Two nights later, the doctors informed Mirza that his mother would be soon transferred to a general ward as her health was showing improvement.

Then on April 20, the phone rang again, but this time to inform that his mother was no more.

“It was shocking. Everything changed within three days. It happened so fast that I couldn’t make sense of it,” he said.

As the COVID pandemic continues to ravage India with an exponential rise in the number of cases, the 4.2 million members of the Indian diaspora in the US are stricken with panic, pain and grief.

Over WhatsApp messages, texts, and calls, almost every day starts with news of someone’s death. Sometimes a close family member or a distant relative and sometimes a friend or a neighbour.

Each passing day exacerbates the fear of losing someone as gut-wrenching images and videos of people struggling to find medical needs – oxygen cylinders, remdesivir injections, hospital beds – and overwhelmed crematoriums and graveyards flash on social media and news channels in the US.

In the first week of April, Sristy Agrawal, 24, a PhD student at the University of Colorado, Boulder, was preparing for her semester exams when she received a call from her parents who live in the eastern Indian state of Odisha.

Her uncle Suresh Agrawal, 50, had died of COVID.

As the hours and days passed, Sristy received more and more frantic calls and messages from family members about their positive COVID tests, including Gauri Shankar, her 70-year old grandfather.

“Nearly 20 family members had tested positive for the virus. But I was worried more about my grandfather as he was too told and at risk,” Agrawal told Al Jazeera.

Sristy put aside her studies and pored through social media posts and websites for help. For hours, she made dozens of calls to hospitals to arrange for oxygen and a hospital bed for him. But all were overwhelmed and running beyond capacity.

“I would see bad dreams and wake up in the night frequently. I dreamt of oxygen cylinders for two days and how I could get them back to India,” she said.

She finally got Shankar a hospital bed, but it was too late. He died of respiratory failure on April 12.

Nearly everyone in the Indian diaspora community has a similar story of loss and helplessness.

Modi is solely responsible for this crisis.

Pratibha Bhatnagar, an Ayurveda expert from Miami in the state of Florida, lost her cousin to COVID in Varanasi, a town in the northern state of Uttar Pradesh, also the parliamentary constituency of Prime Minister Narendra Modi.

Anil Shah, 40, tested positive for COVID on April 15. Within hours, he started developing severe respiratory issues and needed immediate hospitalisation, but he could not find a spot.

“He was gasping for breath and needed a ventilator. Everyone in the family made calls, but there was none,” Bhatnagar told Al Jazeera.

He died the next day, leaving behind his wife and two children. Bhatnagar is devastated.

“He was too young to die. I am horrified, numb, and in disbelief,” she said.

Many in the diaspora who have lost their loved ones are hesitant to travel back considering the unpredictable international travel situation and the risk of contracting India’s double mutant strain of the virus.

So, they mourn from afar.

When the second wave began in India early last month, at least 30 of Asad Ansari’s immediate and extended family in the southern Indian states of Telangana and Andhra Pradesh tested positive for coronavirus.

By the end of April, 10 out of the 30 had fought and lost battles against COVID in homes and hospitals.

“Almost every phone call from India would inform us about a new hospitalisation or a new death in the family. It was terrifying,” Ansari, 25, an IT professional from Raleigh, North Carolina told Al Jazeera.

Fearing possible travel restrictions and the risk of contracting the virus, Ansari decided against travelling to India. Instead, he invited all his siblings and cousins, who live in cities across the US, to mourn at his house.

“Travelling to India meant risking the health of my family here in the US as well, and you never know when countries will close their borders,” he said. “We all cried together and then prayed for the dead. That’s the only thing we could do.”

On Friday, US President Joe Biden signed a proclamation restricting travel from India, which banned most non-US citizens travelling from India from entering the US. The measure went into effect on Tuesday.

As the COVID crisis continues to worsen back home, the Indian diaspora in the US is trying to help. Many individuals and organisations have mobilised resources, set up help desks, and started donation campaigns to send immediate aid to India.

The website includes the names and numbers of oxygen suppliers, hospitals with ICUs, doctors who are providing online consultations, and organisations delivering food to coronavirus patients.

“Not only in India but here as well people are desperately looking for information online about how and where to provide COVID-19 related care to their family members infected by coronavirus back home,” Ediga, 44, told Al Jazeera.

On April 22, Rohit Mediratta and his wife Kanika Thakar started a GoFundMe campaign to buy critically needed oxygen concentrators for hospitals in India. Within a week, they raised nearly $395,000 to buy at least 760 devices.

“We have been able to purchase 224 oxygen concentrators, with 100 of them expected to have reached Delhi on May 2 and the remaining over the course of next week,” Mediratta, a software engineer in Palo Alto, California told Al Jazeera.

The couple is currently working with the Save Life Foundation, a non-profit based in New Delhi to supply concentrators, cylinders, and other respiratory care equipment to smaller hospitals and nursing facilities across India.

“Our main objective right now is to save lives. We are working out different ways to immediately send aid to India,” Manzoor Ghori, executive director of Indian Muslim Relief and Charities told Al Jazeera.

“This is a time of grief and we are all in this together,” he added.

Once a hub of support for Prime Minister Modi’s government, the Indian diaspora is now full of mounting anger at the government’s handling of the pandemic.

Many say the Indian government claimed victory over COVID too early and used it as a political tool to try to win crucial state elections.

“BJP leaders made false claims to people that there is no virus and they had won the battle,” Agrawal told Al Jazeera.

Japneet Singh, a 25-year-old Sikh-American who is running for New York City Council, lost his uncle to COVID-19 on April 30 in the Hoshiarpur district of Punjab state.

Singh blames Modi’s leadership for bringing about the COVID catastrophe.

“His failed leadership and irresponsibility all across India propelled the virus to get worse,” he said. “Modi is solely responsible for this crisis.”