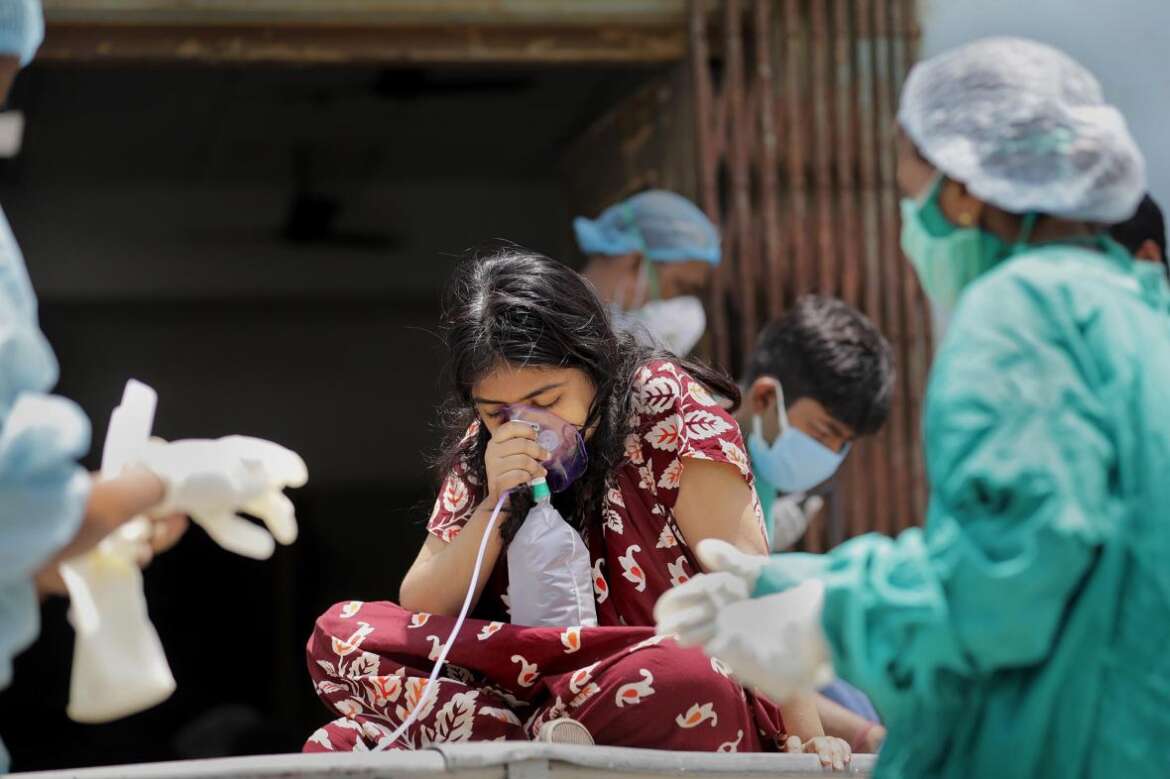 Arrogance, hyper-nationalism and bureaucratic incompetence have combined to create a crisis of epic proportions in India, with its crowd-loving PM basking while citizens suffocate.  Pandemic modellers fear India could reach half a million cases a day

Narendra Modi could not hide his delight as he surveyed his cheering supporters. “I’ve never seen such huge crowds,” the Indian prime minister declared at an election rally in West Bengal last Saturday. But as Modi’s followers massed, the health authorities recorded another grim milestone: India had hit 230,000 new coronavirus infections in 24 hours, an unenviable world record.

By yesterday, the daily figure had topped 340,000, another global high. Hospitals are turning away the sick because there are not enough beds, oxygen or staff to treat them. It is likely to get much worse.

Dr Shahid Jameel, a virologist and director of biosciences at Ashoka University near Delhi, said the peak of this second wave was still two weeks away and could see up to half a million cases a day. “That’s what some virus models suggest,” he told The Sunday Times.

Even as death and despair stalked the nation, Modi and his ruling Bharatiya Janata Party (BJP) rejected lockdown and forged ahead with mass gatherings. Only in recent days has he reluctantly suspended BJP campaigning in state elections. Modi also belatedly urged Hindu devotees to stay away from the Ganges, after millions of pilgrims had bathed together in the sacred waters. The election rallies and Kumbh Mela festival turned out to be super-spreader events — as public health experts had warned.

Yet just two months ago India appeared to have a strikingly low infection count: 11,000 recorded cases per day, in a country of 1.4 billion. What went so terribly wrong? A virulent new double-variant mutation has played its part, though scientists dispute the size of its footprint. India has also been felled by a cocktail of hubris, complacency and nationalist politics, all exacerbated by a slow domestic vaccine roll-out, an ill-equipped health system, lax protection, pandemic fatigue and promotion of the economy over containment.

Even as confirmed cases slumped this year, public health experts urged Indians not to let their guard down, noting stubborn pockets of infection. By late February there were also reports of new variants in Maharashtra, the worst-affected state. But those warnings fell on deaf ears as Modi and his acolytes preached a message of triumphalism and exceptionalism. India had “defeated” the virus, Modi told the World Economic Forum.

Just last month, even as infections surged, Harsh Vardhan, the health minister, assured Indians that the country was “in the endgame” of the pandemic. He lauded Modi as a “vaccine guru” and “example to the world”.

To demonstrate India’s success, Modi was determined to open up an economy that had taken a battering after he imposed a nationwide lockdown overnight last year. Workplaces, markets and shopping malls have reopened and there was a surge in big weddings postponed from last year. Modi is now an anti- lockdown champion. But in Delhi and the largest city, Mumbai, local leaders have imposed their own hard lockdowns.

Implementing social distancing was always a challenge in the densely populated metropolises. But Modi’s critics have blamed him for encouraging mass gatherings as India careened from calm to calamity. Last month there was barely a mask in sight as large crowds attended two cricket Tests between India and England in the Narendra Modi Stadium in Gujarat, his home state.

In Uttarakhand the BJP authorities allowed the Kumbh Mela celebration to go ahead, despite warnings of disaster by public health experts. “Mother Ganges will save them from this pandemic,” said an organiser, but for thousands the trip and dip ended in infection.

Four large states pressed ahead with elections. Modi continued to stage large rallies, fixated on using an expected electoral bounce to wrestle West Bengal from a political rival. The government’s Covid-19 task force reportedly did not even meet in February or March.

The rapid spiral into disaster came as no surprise to Abdul Fathahudeen, a critical care expert on Kerala state’s Covid taskforce. “I said in February that Covid had not gone anywhere and a tsunami would hit us if urgent actions were not taken,” he said. “A false sense of normalcy crept in and everybody, including people and officials, did not take measures to stop the second wave. Sadly, a tsunami has indeed hit us now.”

K Srinath Reddy, the president of the Public Health Foundation of India, told the BBC: “There was a feeling of triumphalism. Some felt we had achieved herd immunity. Everyone wanted to get back to work. This narrative fell on many receptive ears, and the few voices of caution were not heeded.”

Mihir Sharma, a well-known economist and Modi critic, said: “As is typical in India, official arrogance, hyper-nationalism, populism and an ample dose of bureaucratic incompetence have combined to create a crisis.” 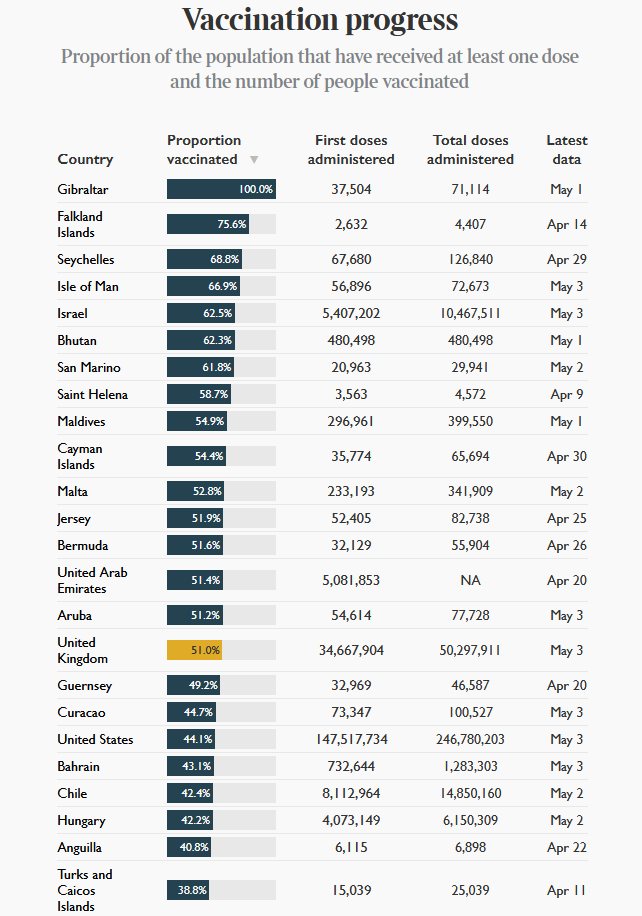 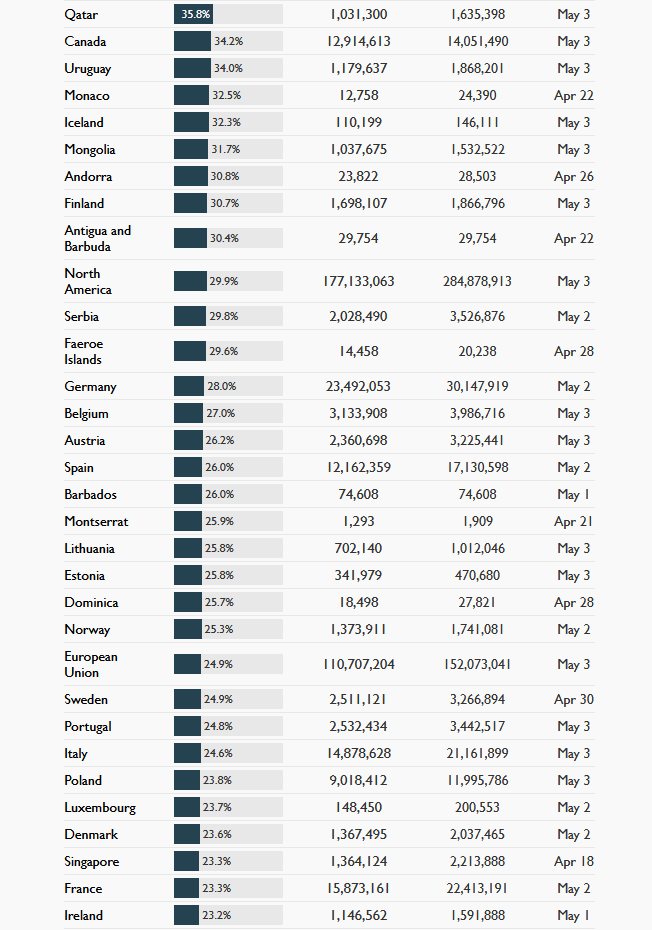 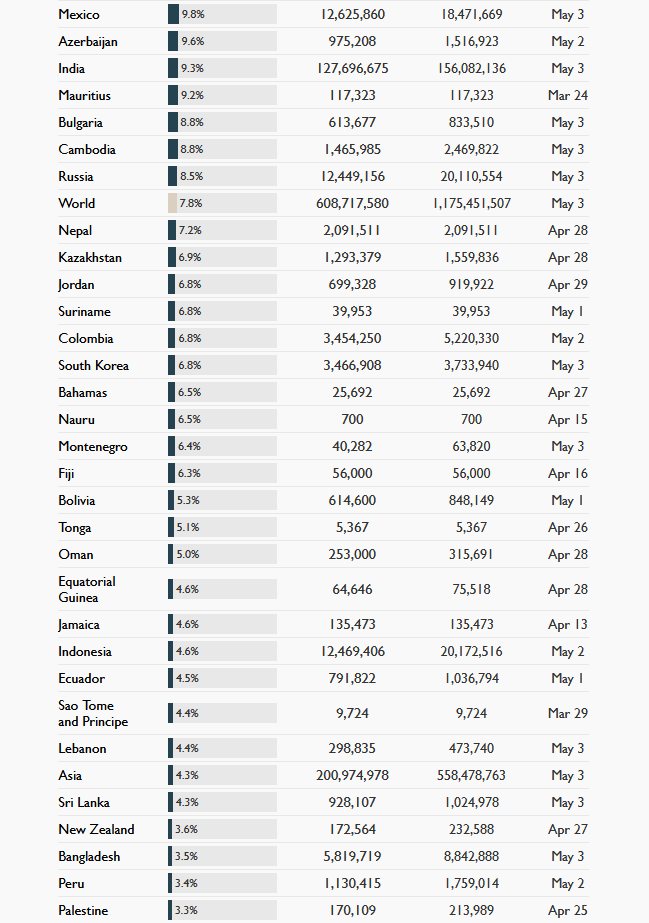 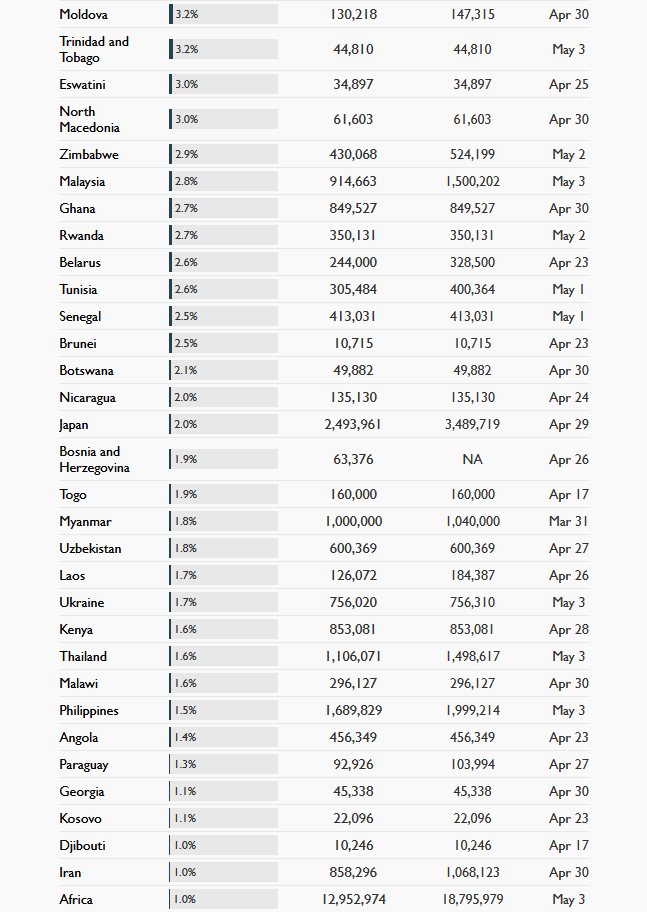 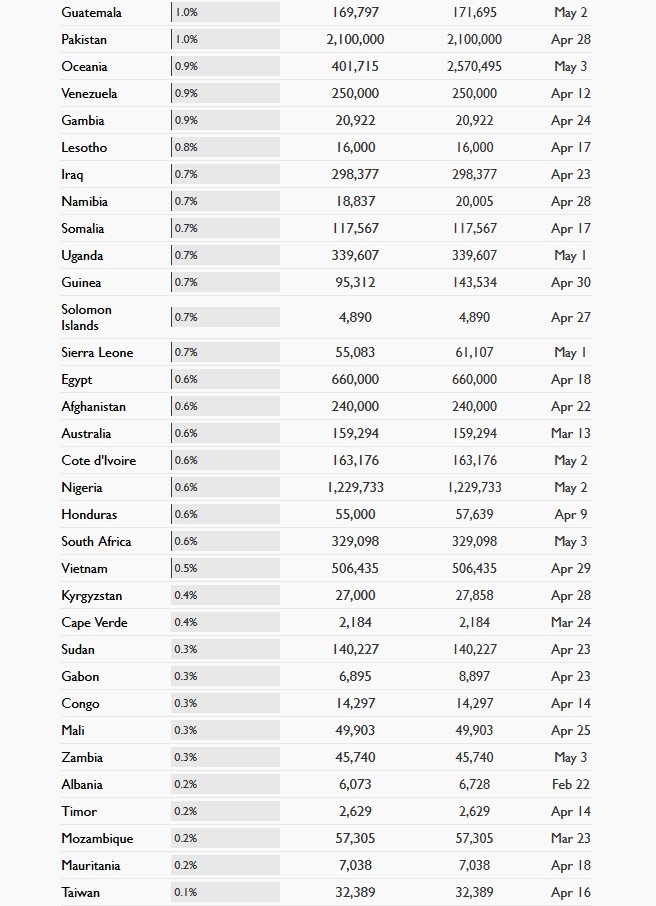 Proportion vaccinated based on population estimates. Rounded down to 100% if the calculated proportion ever exceeds 100%

The country has also been plagued by a faltering vaccination roll-out and shortages, even though it is home to the world’s largest vaccine producer, the Serum Institute of India. It has administered only 130 million jabs, with fewer than 1.5 per cent of recipients receiving two doses. Anyone over 18 will be eligible for a vaccine from next Saturday, but it will take time to change the course of the outbreak.

Premature claims of victory among Modi’s political and media cheerleaders undermined the vaccination campaign, as did a high degree of scepticism, which was further fuelled by doubts about results of one of the local jabs.

In February the Modi government ordered the Serum Institute of India – an important global supplier that makes the AstraZeneca vaccine for the UK, the EU and the Covax programme for poorer nations – to halt exports and focus on doses for India.

But the institute has said it will not be able to increase supplies before June because of funding shortfalls and US restrictions on exports of raw materials used in the manufacture of vaccination equipment.

President Joe Biden has invoked the wartime Defence Production Act to require US suppliers of these raw materials to give priority to American pharmaceutical companies, which have increased vaccine production to meet his ambitious plans for inoculating the whole country.

Adar Poonawalla, the chief executive of the Serum Institute, has pleaded with Biden on social media to share these materials. “Respected @POTUS,” he tweeted, “if we are to truly unite in beating this virus, on behalf of the vaccine industry outside the US, I humbly request you to lift the embargo of raw material exports out of the US so that vaccine production can ramp up.”

Washington has denied there is an embargo, but when asked about India’s appeal for help, Biden said on Wednesday that the US was not yet in a position to share. “We don’t have enough to be confident to send it abroad now. But I expect we’re going to be able to do that,” he said. “We’re looking at what is going to be done with some of the vaccines that we are not using.”

The administration has been widely criticised for continuing Donald Trump’s “America first” policy when it comes to vaccines. Anger deepened on Friday at comments by Ned Price, the State Department spokesman, regarding the de facto embargo. “It’s in the interests of the rest of the world to see Americans vaccinated,” he said.