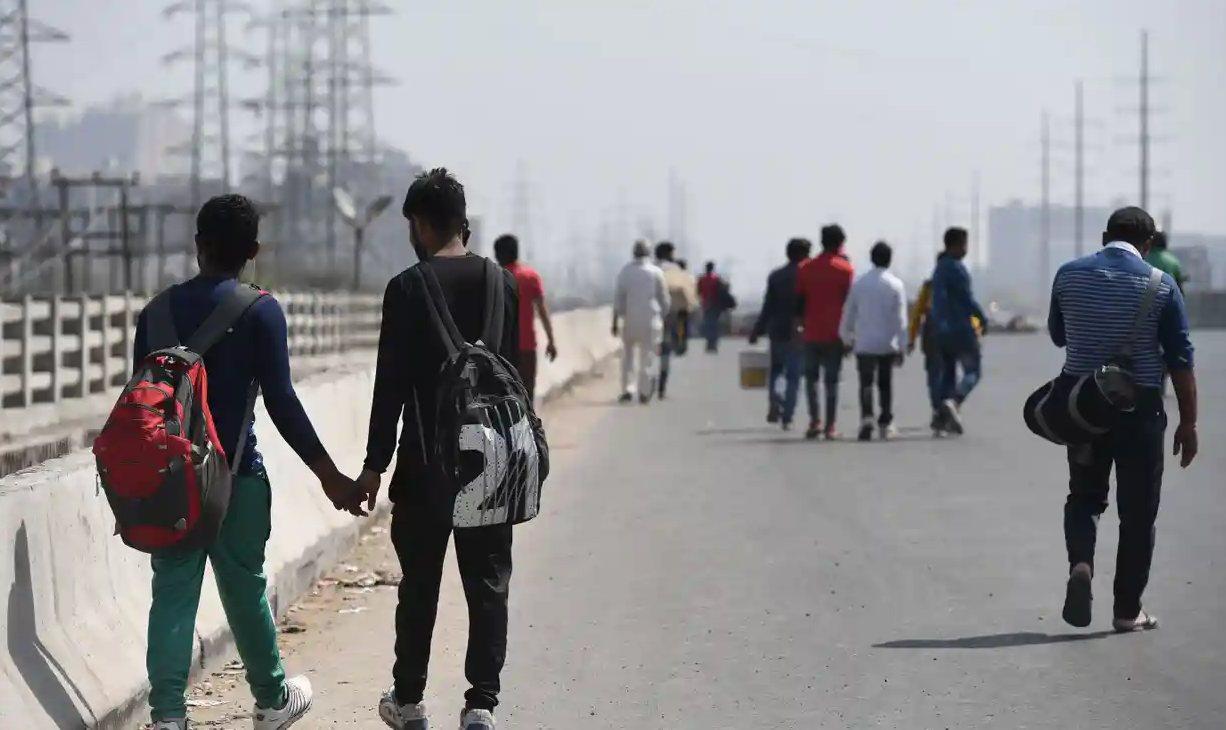 In February, 12-year-old Jamlo Makdam left her home in the Indian state of Chhattisgarh to work as a farm labourer in the chilli fields of Telangana, earning 200 rupees (about £2) a day. But on the morning of 23 March, she – along with hundreds of million others across the country – suddenly discovered that they were not allowed to work. The prime minister, Narendra Modi, had announced India’s draconian lockdown the previous evening, stopping all economic activity, even all movement, with just four hours’ notice. No public transport, no people allowed on roads, no shops or workplaces open; and no chance of livelihood for the 450 million or so informal workers in India who have no legal or social protections.

For a while, the young girl lived off the wages she had been saving up to take home. But in a few weeks the money had run out, and without any compensation in the form of food or cash transfers, she and her friends were on the verge of starvation. Desperate, they began the long trek home, walking 150km over three days and nights through forests and fields, avoiding the highways where they could be stopped and punished by police simply for daring to be out on the road. But on 18 April, dehydrated and malnourished, Jamlo collapsed and died, just a few hours away from her home.

Jamlo became another statistic in the ever-increasing number of “lockdown deaths”, now estimated to be nearly a thousand, resulting from the brutal state response to Covid-19 that has both created a humanitarian catastrophe and failed to stop the relentless surge of the disease. In India, dealing with the pandemic has never really been about lives versus livelihoods: it was, and continues to be, about lives versus lives, with some lives being much cheaper than others. India has been a world leader in economic disparities and social discrimination for a while; the pandemic policy response brought this upfront while introducing newer, even more unsavoury, elements.

The disease entered India through those who had travelled abroad – the top 2% of the population. But the poor have had to suffer disproportionately because of it – and now, increasingly, are being blamed for its spread. Centuries-old practices concerning pollution, purity and stigma that were part of caste-based hierarchical Hinduism have been repurposed as “social distancing”, with health concerns justifying crudely discriminatory behaviour. Elite and middle-class attitudes have been disgraceful: hypocritically banging plates to celebrate health workers, but then stigmatising them as sources of infection and not caring to ensure pay or protection for the worst-paid frontline workers in community health and sanitation.

If societal responses have been lacking, government responses have been even worse. (States like Kerala are honourable exceptions.) The central government’s approach to public health has been miserly, incompetent and insensitive. Containment policies copied from China and Europe display no recognition of the lived reality of much of India’s population. Social – more accurately physical – distancing can’t be done by people in crowded and congested homes with five or more people living in one room. Frequent hand-washing is a luxury when access to clean water is limited, and it must be collected through lengthy, arduous journeys made by women and girls. But officialdom has seen no need to adjust these guidelines or make it possible for poor people to achieve them. And treatment for the infected varies hugely according to income: public hospitals are overcrowded and overstretched; private ones charge stratospheric rates.

The official attitude to the estimated 100 million or more rural-urban migrants who build India’s towns and cities and provide their services was even more telling. Early into the lockdown, special repatriation flights were arranged for Indians stranded abroad. But internal migrants got no such relief for two months; they were deprived of their right to livelihood but only – and rarely – received the most paltry compensation. When, in desperation, they travelled on handcarts, containers and cement mixers or simply walked hundreds of kilometres to get home, they faced beatings, detention, being sprayed with disinfectant, even being killed on rail tracks where they slept thinking that no trains were allowed. The arbitrary dusk-to-dawn nationwide curfews (with no public health rationale) forced them to walk in the blazing heat. When special train services for such migrants were finally started, nearly two months into lockdown, impoverished workers had to congregate in stations in large numbers to get tickets, expose themselves to infection and then pay full fares. Conditions on these trains were often so appalling, with delayed journeys in intense heat without food and water provision, that in just 10 days in May, 80 people died on board.

India’s public distribution system, which currently holds nearly 100 million tonnes of food grain stocks, could have been used to feed the newly hungry. But only small amounts have been released for free distribution even as evidence of starvation grows, and this parsimony has been compounded by the obscenity of selling some food stocks to convert into ethanol for making hand sanitisers. Meanwhile, the single-minded focus on Covid-19 means that other health concerns of the poor are ignored or given less attention. Tuberculosis has been the biggest killer of the poor in India, but many TB patients have not received treatment. Immunisation of children has suffered and hospital birthshave fallen by 40%.

There are many other ways that policy responses to Covid-19 have intensified existing inequalities of class, caste, and gender and even religion. Despite this, poll numbers do not appear to show much of a drop in support for Modi and the opposition (including political parties, trade unions and social movements) does not seem have made much headway. Is the current apparently passive, fatalistic attitude of the oppressed millions the sign of a new subjugation – or simply a lull before the storm?