British Muslims often express a stronger sense of belonging than other citizens, so why are they still seen as outsiders? 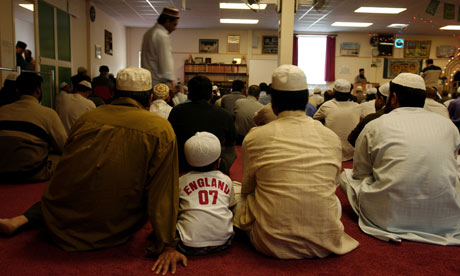 ‘More than half (55%) of Britons would be concerned if a mosque was built in their area.’ Photograph: Martin Godwin for the Guardian

In Britain today there is a mismatch between how non-Muslims often perceive Muslims and how Muslims typically perceive themselves. This disconnect is down to a tendency by non-Muslims to assume that Muslims struggle with their British identity and divided loyalties. These concerns were challenged a few days ago,in a report by the University of Essex that found Muslims actually identify with Britishness more than any other Britons.

This study is just one of several recent studies that have consistently found that Muslims in Britain express a stronger sense of belonging in Britain than their compatriots. Consider the following examples:

• 83% of Muslims are proud to be a British citizen, compared to 79% of the general public.

• 77% of Muslims strongly identify with Britain while only 50% of the wider population do.

• 82% of Muslims want to live in diverse and mixed neighbourhoodscompared to 63% of non-Muslim Britons.

• 90% of Pakistanis feel a strong sense of belonging in Britain compared to 84% of white people.

Those who work closely with Muslim communities will attest to the integrated position of British Muslims and that despite frequent exoticisation, British Muslim lives are much the same as any other citizen’s. British Muslims also appreciate their ability to practise their religion in Britain without the type of subjugation that fellow Muslims are subjected to under despotic regimes in several Muslim-majority countries. Even though negative depictions may encourage people to imagine Muslims as similar to the 7/7 bombers who struck seven years ago this week, your average British Muslim is much more likely to be similar to a confident Amir Khan, a bubbly Konnie Huq or a hardworking James Caan.

There is, quite frankly, no major issue of Muslims not wanting to be a part of British society. But there is an issue with the common but unspoken xenophobia pervasive in British society that casts Muslims as outsiders. That is why despite Muslims repeatedly pledging their dedication to Britain, a consistent spattering of polls show that many non-Muslim Britons still view Muslims as a potential enemy within. Consider the following examples:

• Only 28% of Britons believe Muslims want to integrate into British society.

• 45% of Britons admit that they think there are too many Muslims in Britain.

• 55% of Britons would be concerned if a mosque was built in their area.

• 58% of Britons associate Islam with extremism.

The minority of Muslims in Britain who do view Britain with contempt – as indeed, we must recognise there are some – frequently explain their disaffection as a result of being labelled as outsiders and told they do not belong. Thus, the inability to appreciate British Muslims as typical citizens can actually create the very atypical citizens that are feared in the first place. Muslims want to be part of British society but their marginalisation may lead to some retreating to the margins.

If the myth that Muslims in Britain will not integrate is allowed to be propagated, it will only lead to the continuation of a harmful cycle whereby greater distrust and animosity is sown. The results of this can be devastating. Last Sunday marked the three-year anniversary of the Islamophobic murder of Marwa El-Sherbini by a far-right attacker, a crude example of an inability to accept that Muslims are at home in Europe. This intense rejection of Muslims is increasing across Europe, which is especially disturbing considering that a significant number of the far right would consider armed conflict against Muslims, as the case of Anders Breivik revealed. In Britain, we have seen several far-right plots that seek to undermine the presence of Muslims in British society, such as a recent arson attack on a mosque in Stoke-on-Trent. Clearly, there are weighty consequences to the dismissal of Muslims as fellow British citizens.

While politicians may claim that multiculturalism has failed, there is a strong case to be made that it operates successfully every day when Britons of different faiths, ethnicities and backgrounds convivially co-operate alongside each other to make the nation what it is today. Muslims are integrated, feel at home in Britain and are quite simply as British as the next person, even though this does not quite match the sensationalised cynicism that some enjoy indulging in. This rather unexciting conclusion is actually rather exciting as it lays to bed many of the unwarranted concerns that are held about British Muslims.