NEW YORK – A leading American Islamic organization has launched its annual initiative in August and September to help poor families get ready for schools, offering thousands of backpacks to children of all faiths in low-income areas around the country.

“It’s overlooked a lot of times because regular people think that everyone comes in with enough supplies. 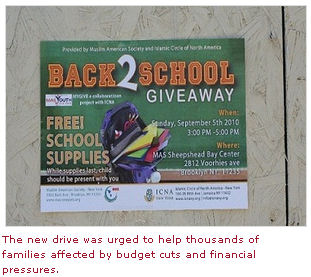 “There are a lot of teachers who have to spend out of pocket because a lot of kids don’t have that much, and it’s important that everyone have an equal opportunity. It’s very important that they have the right essentials.”

The initiative, led by ICNA Relief, a division of ICNA, will feature of a series of free school supply giveaways in low-income areas with a total of 30,000 backpacks.

The first giveaway takes place at the Malcolm X and Dr. Betty Shabazz Educational and Memorial Center in Harlem on Aug. 24 from 5 to 7 p.m.

Similar giveaways will take place around the five boroughs up to Sept. 2, including the Bronx Muslim Center, Andalusia School in Yonkers and the MAS Sheepshead Bay Community Center in Brooklyn on Aug. 25.

“We try and do these giveaways in communities that are in need,” Ranginwala said.

“We look at statistics and try to find places there [where we can distribute]. The turnout that we have has also been consistently high.”

The 30,000 backpacks slated for giveaway this year will cover 21 states and several more low-income areas in cities and towns.

The new drive was urged to help thousands of families affected by budget cuts and financial pressures.

“Many families in New York are under financial pressure; some have lost jobs and find it difficult to buy school supplies for their children,” said Salman Khan, Project Director for ICNA NY.

“We hope this initiative will cater to these needs of low-income families, and help build a better future for our children.”

According to a survey by the American Association of School Administrators (AASA) of 453 school administrators across 45 states, budget cuts are noticeably more significant this school year than they were in either 2008-09 or 2009-10.

Ranginwala said the loss of funds to programs that help children from low-income households and areas are disappearing, so his organization is helping to pick up the slack.

“There are a lot of teachers losing their jobs and a lot of after-school programs aren’t happening, and there’s a lot less support that the school can give, so it’s very important to support anywhere you can.”

Seeing a smile on the face of the needy was enough motive for the leading organization’s charitable work.

“At the end, it’s a sort of refreshing thing that comes to your heart when you see a smile on the kid’s face and the parents who come with them,” said Ranginwala.

“That has had a great impact on us. It really helps in building communities together.”