The conversion to Islam of Karima Burns

This Iowa student of Arabic became a Muslim in her heart when she started reading the Quran in order do to her university homework and couldn’t put it down. 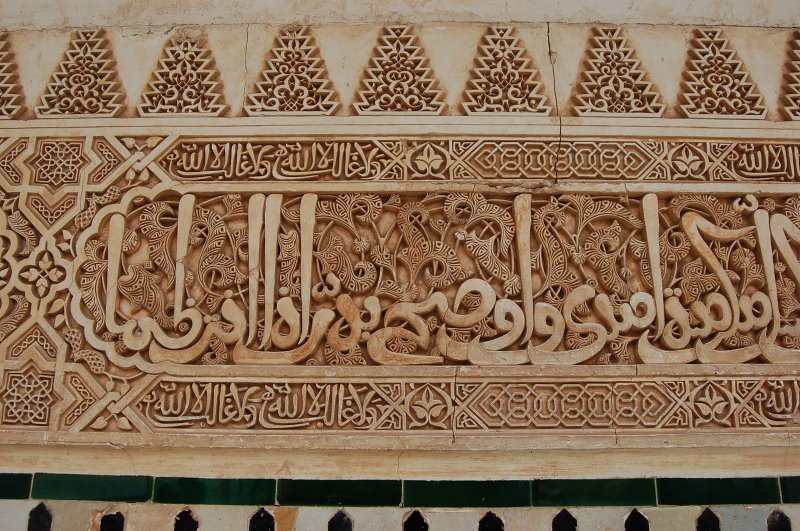 I sat in the Alhambra Mosque in Granada, Spain staring at the script that bordered the walls. It was the most beautiful language I had ever seen. “What language is that?” I said a Spanish tourist. “Arabic,” they answered.

The next day, when the tour attendant asked which language I wanted my tour book in, I answered, “Arabic.”

“Arabic?” she said, surprised. “Do you speak Arabic?”

By the end of my trip I had a bag full of Arabic tour guides to all the sites I had visited in Spain. In fact, my bag was so full that at one point I had to give away some of my clothes so I could make everything fit. But, I hung on to my Arabic tour books as if they were made of gold. I would open them every night and look at the letters of the language as they flowed across the page. I imagined being able to write such beautiful script and I thought to myself that there must be something worth knowing about a culture that had such an artistic language. I vowed that I would study this language when I started college in the fall.

Only two months before, I had left my family in Iowa to take a trip through Europe, alone. I was only 16 years old and due to enter Northwestern University in the fall and I had wanted to “see the world” first. At least, that is what I told my friends and family. In reality I was searching for answers. I had left the church only a few months before and did not know where to turn. I knew that I was not comfortable with what I was being taught, but I did not know of any alternatives.

Where I grew up, in the Midwest, there was no room for confusion – you were either part of the church or you were not. So, I had no idea there was something else. When I set off for Europe I hoped that there was.

In my church we were not allowed to pray to God, we could only pray to Jesus and hope that he would relay the message to God. I had intuitively felt that there was something wrong with that and so, without telling anyone, I secretly prayed to “God.” I sincerely believed that there was only one entity to pray to. But, I felt guilty because this was not what I had been taught. Then, there was the confusing matter of what to do during one’s “daily life.”

“I dutifully went to church every Sunday and was very serious about what I learned regarding honesty, kindness and compassion. So, it confused me when I saw people from church acting so differently during the week. Were there no rules during the week? Did they only apply on Sundays? I looked for some guidance…but found none. There were the Ten Commandments that covered the obvious things like killing, stealing and lying, but other than that, I had no guidelines for how to act when I wasn’t in church. All I knew was: perhaps there was something wrong with wearing mini-skirts to church and only going to Sunday School because of cute guys that attended.

One day, I went to a teacher’s house and saw a shelf lined with Bibles. I asked what they were. “Different versions of the Bible,” my teacher replied. It did not seem to bother him at all that there were so many different versions. But, it bothered me. Some of them were really different and some chapters were even missing from the version I had. I was very confused.

I returned to college that fall disappointed that I had not found the answers I was hoping for in Europe, but with a passion for a language I had only just learned about – Arabic. Ironically, I had stared right at the answers I was searching for, on the walls of the Alhambra. But, it took me two more years to realize that.

The first thing I did when I reached the campus was…enroll in Arabic classes. I was one of only three people in the highly unpopular class. I immersed myself in my Arabic studies with such a passion that my teacher was confused. I did my homework with a calligraphy pen and I went into the Arab areas of Chicago just to track down a Coca Cola bottle written in the language. I begged him to lend me books in Arabic just so I could look at the script. By the time my second year of college came around, I decided I should consider a major in Middle Eastern Studies. So, I enrolled in some classes focusing on the region. In one class we studied the Qur’an.

I opened the Qur’an one night to “do my homework” and could not stop reading it. It was like I had picked up a good novel. I thought to myself, “Wow. This is great. This is what I have always believed. This answers all my questions about how to act during the week and it even states very clearly that there is only one God.”

It just all made so much sense. I was amazed that there was this book written about everything I believed in and had been searching for. I went to class the next day to ask about the author of the book so I could read more books by them. In the copy I had been given, there was a name. I thought it was the author of the book, akin to the Gospels written by St. Luke or the other religions I had studied…that all attributed their writings to some person who was inspired enough to write it down.

My professor informed me that it was not the author but the translator because “according to the Muslims no one had written the book.” The Qur’an was, according to THEM (referring to Muslims, he was Christian) the word of God and had not been changed since it was inspired, recited and then transcribed. Needless to say, I was fascinated. After that, I became passionate, not only about my studies of Arabic, but about studying Islam and about going to the Middle East.

My senior year in college I finally went to Egypt to continue my studies. My favorite place to go became “Islamic Cairo,” where the mosques always gave me a sense of comfort and awe. I felt that by being in them, one could really feel the beauty, power and awe of Allah. And, as always I enjoyed staring at the elegant calligraphy on the walls.

One day a friend asked me why I didn’t convert to Islam if I liked it so much. “But I am already Muslim.” My answer surprised me. But then, I realized that it was a simple matter of logic and common sense. Islam made sense. It inspired me. I knew it was right. Why did I then have to convert? My friend informed me that in order to “be official,” I needed to actually go to the mosque and state my intention in front of two witnesses. So, I did. But, when they gave the certificate to me, I just filed it in my file cabinet with my “other” medical and personal records…because to me, I had always been Muslim. I didn’t need to hang a piece of paper on my wall to tell me that. I had known it the minute I picked up the Qur’an. The minute I opened it, I felt like I had found my long lost family. I hung a picture of the Alhambra Mosque on my wall instead.