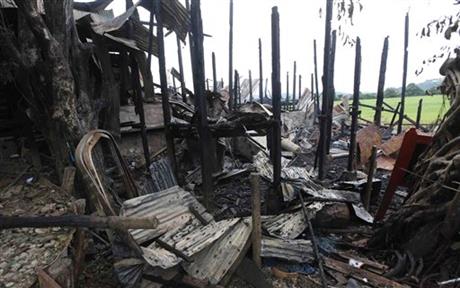 Totally blackened pillars stand among debris of a burnt building Wednesday, Oct. 2, 2013, in Thandwe, Rakhine State, western Myanmar. Terrified Muslim families hid in forests in western Myanmar on Wednesday, one day after rampaging Buddhist mobs killed a 94-year-old woman and burned dozens of homes despite the first trip to the volatile region by President Thein Sein since unrest erupted last year. The violence near Thandwe, a coastal town the president was due to visit later Wednesday on the second day of his tour of Rakhine state, raised new questions about government’s failure to curb anti-Muslim attacks and or protect the embattled minority.

THANDWE, Myanmar (AP) — Terrified Muslim families hid in forests in western Myanmar on Wednesday, one day after fleeing a new round of deadly sectarian violence that erupted even as the president toured the divided region. The discovery of four bodies brought the death toll from the latest clashes up to at least five.

Tuesday’s unrest near the coastal town of Thandwe, which saw Buddhist mobs kill a 94-year-old woman and four other Muslims and burn dozens of homes, underscored the government’s persistent failure to stop the sectarian violence from spreading.

Rights groups say President Thein Sein, visiting the region for the first time since clashes flared there last year, has done little to crack down on religious intolerance and failed to bridge a divide that has left hundreds of thousands of Muslims marginalized and segregated, many of them confined by security forces in inadequately equipped camps for those who fled their homes.

Thein Sein arrived in Thandwe on Wednesday, the second day of his visit to Rakhine state, and was to meet religious leaders from both communities.

While Thein Sein has condemned the violence in Rakhine state before, critics say his security forces have not done enough to contain it. They also say his government has failed to crack down on radical monks who have instilled hatred and fear of the nation’s Muslim minority, arguing they pose a threat to Buddhist culture and traditions.

In a message to religious leaders that ran in Myanmar’s state-run newspapers Wednesday, Thein Sein said the sectarian unrest threatens the government’s reform process “and tarnishes the national image internationally.”

“The constitution of Myanmar fully guarantees freedom of religion as the fundamental right of citizens,” Thein Sein said. “We all should never misuse this noble idea of freedom of religion, or use it as a springboard for any kind of extremism or for fueling hatred.”

Thein Sein has been widely praised for overseeing an unprecedented political opening in the Southeast Asian nation since the army ceded power two years ago to a nominally civilian government led by retired military officers.

Even with a boosted security presence, unrest engulfed several villages in the Thandwe area a day before the president’s arrival. Witnesses said soldiers and police made no efforts to step in to try to stop Tuesday’s violence.

In Thabyuchaing, about 20 kilometers (12 miles) north of Thandwe, more than 700 rioters, some swinging swords, took to the streets, police officer Kyaw Naing said. A 94-year-old Muslim woman died from stab wounds in the clashes that followed, the officer said, adding that between 70 and 80 houses were set on fire. Another officer, however, said only 19 homes were burned.

Thandwe township police confirmed Wednesday that the bodies of four Muslim men were in the village.

A Muslim resident of Thandwe, Myo Min, said a small mosque in Kyikanyet, about 43 kilometers (27 miles) from Thandwe, was burned by attackers Tuesday night. Police said they were trying to confirm that report.

Myo Min said he was concerned about the safety of families who fled Tuesday’s violence. Many families in Thabyuchaing, he said, fled into forests when their village was attacked.

“Many of them, including women and children, are still hiding, and they are cornered and unable to come out,” Myo Min said. “They need food and water, and Muslim elders are discussing with authorities to evacuate them or send food.”

Smoldering buildings — and three injured Buddhist Rakhines — were also seen by The Associated Press in the nearby village of Shwe Hlay. A police officer, speaking on condition of anonymity because he did not have authority to talk to the media, said the village of Linthi also was hit by rioters. Both villages are about 32 kilometers (20 miles) outside of Thandwe.

Sectarian clashes that began in Rakhine in June 2012 have since morphed into an anti-Muslim campaign that has spread to towns and villages nationwide. So far, hundreds of people have been killed and more than 140,000 have fled their homes, the vast majority of them Muslims.

Most of those targeted in Rakhine state have been ethnic Rohingya Muslims, considered by many in the country to be illegal migrants from Bangladesh, though many of their families arrived generations ago. But in the latest flare-up this week, the victims were Kamans, another Muslim minority group, whose citizenship is recognized.

Muslims, who account for about 4 percent of Myanmar’s roughly 60 million people, have been the main victims of the violence, but they have been prosecuted for crimes related to the clashes far more often than members of the Buddhist majority.

A statement issued Wednesday by the U.S. Embassy in Myanmar expressed deep concern about the reports of violence, and urged the authorities “to respond quickly and decisively to the violence to help protect all the region’s residents and their property” and bring to justice those responsible for the attacks.

“Most importantly, we call on religious and civil society leaders, and all citizens throughout the country, to stand against continued violence targeting Muslim communities, and to promote understanding, mutual respect and peaceful co-existence among all people in this diverse country,” the statement said.